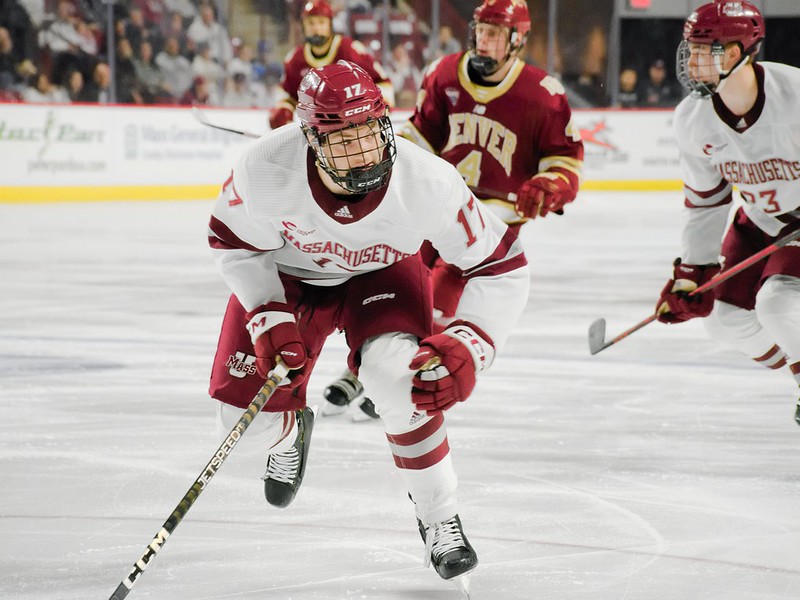 The Massachusetts hockey team’s freshmen have quickly adapted to the pace of college hockey as they gain more experience on the ice. During a series against the top ranked team at the time, Denver, the freshmen proved with two goals that they can play with the older guys.

Due to the hit that the Minutemen (2-0-1) took at the end of last season – losing most of their goal scorers – there was uncertainty heading into this season. With freshman showing up on the score sheet this past weekend, those worries may slowly go away.

“I don’t think you can look at anybody on our roster and say, ‘that guy is going to have this many points this year,’” head coach Greg Carvel said. “It’s important that this is as deep of a forward group as we’ve had since I have been here and I’m excited about that.”

With a fast pace and not a lot of room for them on the ice, the newcomers have had to quickly learn how to adapt to a new environment. Taking on a top ranked team like Denver allowed for them to understand the constant battle for wins.

“It’s nice to see Denver right at the start and know that’s the standard,” freshman Tyson Dyck said. “Obviously teams are going to play better on some given nights but consistently that’s where we need to be as a team and that’s where the best teams in college are going to be. It’s really good to see what that standard is.”

Kenny Connors and Dyck were two freshmen who found the back of the net in the series, both goals coming during Friday’s game. Connors scored while UMass was down a man, due to a five-minute major. Reed Lebster assisted the goal, an older player that Connors does not typically see ice time with.

The freshmen fourth line that consists of Connors, Dyck and Cole O’Hara was the one to help Dyck net his goal. A quick tap pass by Connor to O’Hara generated a backhand shot on the Denver goaltender. The puck landed on Dyck’s stick which found its way to the back of the net.

“It was pure joy,” Dyck said of his goal. “I think it’s harder to draw up a better first college goal for me so just to be able to celebrate with the students there in the end and having it be at a meaningful game like that was pretty surreal.”

The fourth line was a large contributor in Friday’s wins. The three of them consistently added shots on net, combing for five shots on goal, the most of the four lines.

In addition, the freshman line live together, which has furthered their chemistry. Throughout the year, they are likely to become more skilled and present on the ice.

“We can play [freshmen] as a fourth line and match them up against other fourth lines,” Carvel said. “They are all really smart, good players. They are all going to get better quickly as they adjust to this level and get stronger. I imagine they’ll move up from fourth line status to higher, but right now it’s a pretty good situation to be in. We’ve got a really good fourth line that can score goals for us.”

The fourth line is not the only place first year players are seen. Noah Ellis has found his way on the third defensive pairing with junior Linden Alger. The pairing has quickly gained chemistry, with both of them learning from one another. Ellis, however, has room to grow in the third pairing, not making an impact yet. In UMass’ series against Union (2-3-1) Ellis will continue to take big steps.

Minutemen leadership have also noticed the freshmen, noting that they never rush off the ice after practice. They are striving to become better by taking time to develop themselves.

“I’ve said it from the start, they are a really skilled group,” Cal Kiefiuk said. “But the way we play here is harder and it’s physical. I think they are coming along really well and taking strides every day in practice. I think it really showed this weekend, they were playing with a ton of confidence, and they were very important for us this weekend.”

The leaders have been the ones to help the group in practices and games. The freshmen need guys to look up to both on and off the ice.  With all three captains being forwards, the fourth line can easily look to them for help and advice.

“They have a lot of positive constructive criticism that they give,” Dyck said. “They keep the move really focused, but also they don’t want us too low so that’s a big thing for us as freshmen. We don’t have quite the experience that they have but they are guiding us through that and managing the game a little more.”

Kayla Gregoire can be reached at [email protected] and followed on Twitter @Kaygregoire.