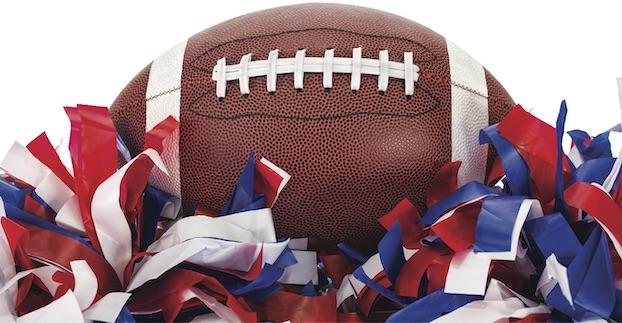 OUR TAKE: Sam Houston showed its big-play ability last week with nine plays longer than 20 yards, including three for touchdowns as the Broncos edged Lafayette by a point. The Broncos will need more big-chunk plays on offense, plus stop the Bears from putting together long drives with their split-back veer offense. Sam Houston is ranked 25th in the most recent power ratings with three games left, all against top-10 teams.

WORTH NOTING: Twenty-three of DeRidder’s 26 TDs have come via the run.

OUR TAKE: Xavier Ford continued to wreck defenses last week, running for 177 yards and five TDs on 38 carries. LaGrange’s ground game came to life last week with Keshaun Doucet running for 114 yards and two TDs. QB Jason Wilson (1,087 yards) has surpassed 100 passing yards in each game this season. A balanced Gators attack that keeps the chains moving would help the defense, which has struggled to stop the run.

WORTH NOTING: Ford has 73 more carries (223) than any other running back in the area.

OUR TAKE: Both teams have big motivation with Prep needing a win to stay alive in the district title race while Iowa is also seeking to avenge a one-point loss to the Trailblazers last year in a game that decided the district title. LCCP was plagued by turnovers in last week’s loss to St. Louis. Iowa has been stout defensively, allowing a total of seven points over the last three weeks.

WORTH NOTING: Iowa RB Ronald Young has been held under 100 yards once all season, in its lone loss, to Leesville.

OUR TAKE: The Bulldogs have generated momentum with two wins after a few competitive losses. The Rams are streaking in the wrong direction as injuries have hampered the offense. A pair of versatile athletes, Kristian Ozane and Tristan Goodly, may have to provide the big plays on offense. Jennings is content to grind out long drives with RBs Jamaric McZeal and Rejohn Zeno.

WORTH NOTING: McZeal and Zeno have combined for 1,150 yards and 11 TDs.

OUR TAKE: Mamou allowed 481 rushing yards last week. Things won’t get any easier for the Green Demons this week. Iota plays a physical style, led by RBs Clay Doucet and Brayden Lavergne. Mamou’s offense has scored 30 or more points four times this season but will need a few stops from the defense to stay in the game.

WORTH NOTING: Doucet and Lavergne have combined for 939 yards and 11 TDs.

OUR TAKE: DeQuincy will face its second consecutive top-10 team this week. Notre Dame has scored 52 points per game in the last two weeks after back-to-back losses to Teurlings Catholic and Cecilia. It’s the first time the teams will meet since 1996.

WORTH NOTING: DeQuincy’s Wyatt Lavergne has run for more than 100 yards and a TD in back-to-back games.

OUR TAKE: Grand Lake had to hold on last week as Lake Arthur tried to rally with 22 fourth-quarter points, and will need to make adjustments and not get caught looking forward to next week’s matchup with Notre Dame. Vinton is looking to end a five-game win streak after opening the season with a 21-18 win over Merryville.

WORTH NOTING: The Hornets almost had three backs run for more than 100 yards last week with Ian Vigo, Brent Hardesty and Bryce Guillory going for at least 96 yards apiece.

OUR TAKE: Welsh is the last unbeaten team left in Southwest Louisiana, but rival games are always tough. Lake Arthur almost toppled Grand Lake with 22 fourth-quarter points. While the Greyhounds rely heavily on the run but lately the passing game has become more of a factor. Lake Arthur QB Ray Levi had his best passing game last week with 198 yards and two scores.

WORTH NOTING: It’s the first meeting between the Jeff Davis Parish rivals since a 24-13 Lake Arthur win in 2019. Welsh won six consecutive games in the series prior to 2019.

OUR TAKE: Oakdale is looking to stay in the top 10 in the Division IV power ratings. Pickering is allowing 61.8 points a game which could lead to a prime opportunity for Oakdale RB Cedric Allison (1,110 yards, 11 TDs) to have another big game after putting up 350 yards and three TDs last week.

WORTH NOTING: Oakdale has scored seven special teams or defensive TDs this season, including an Allison kickoff return and a Derrick Green pick-six last week.

OUR TAKE: Rosepine enters with a four-game win streak while averaging 50.2 points during that span with weapons in the run and passing game. Menard has been on both ends of a shutout the last two weeks, winning 51-0 in Week 6 but shut out last week by Avoyelles.

WORTH NOTING: Rosepine senior Grant Ducote has run for more than 200 yards in three consecutive games.

OUR TAKE: The Tigers must bounce back after losing last week. Elton is no pushover, powered by a strong ground game. DeMarcus Jack is a big, physical runner. Oberlin spreads the wealth on offense with Dominique Eaves (574 yards, 7 TDs) the leader and Noah Carter (11 total TDs) the playmaker.

WORTH NOTING: Basile has won seven of the last nine games in the series with both Oberlin wins coming in the 2019 season.

OUR TAKE: The Bears have a balanced offense led by Cohen Guidry, who has run for 340 yards, caught 30 passes for 416 yards and scored eight total TDs. Hamilton is led by its own versatile playmaker in Javon Vital, who leads the team in receptions and has scored on a run and kickoff return.

OUR TAKE: Basile, coming off a win that gave it control of the District 5-1A race, must avoid an emotional letdown. The Bearcats defense hasn’t allowed more than 21 points in a game and has allowed a total of 50 over the last five weeks. Port Barre reached a double-digit point total for the first time this season last week.

WORTH NOTING: Port Barre has been shut out three times.

OUR TAKE: The Tors have the benefit of playing at home the next three weeks, starting tonight with the top-ranked team in the Louisiana Sports Writers Association Class 5A poll. The Tors will need to squeeze everything they can out of each offensive drive as the Wildcats haven’t allowed more than six points in a game.

WORTH NOTING: Destrehan QB Jai Eugene Jr. is a Tulane recruit and the son of former LSU defensive Jai Eugene.