Melvin Manhoef will forever be known as one of the most dangerous, most violent strikers of all-time, in both 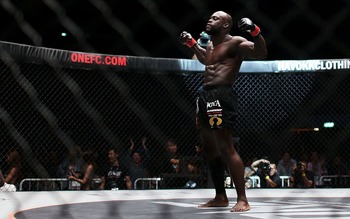 Hailing from Suriname, later moving to Amsterdam, Netherlands, Manhoef began his combat career competing in kickboxing at age 18, and he very quickly became quite successful in the sport.

Throughout his long and illustrious career in kickboxing, Manhoef would partake in his final bout in 2017, snapping his seven-fight losing skid with a unanimous decision victory. Manhoef would retire from the sport following this affair, which improved his record to 38-14.

That means, more or less, Manhoef was 37-7 at his peak in the sport.

But he didn’t compete solely in kickboxing, he’d go back and forth between that and MMA, where he debuted in 1995, also at age 18.

Manhoef would go 16-2-1 through his first 19 bouts, all but two (including the draw) ending via knockout.

This run saw him capture the Cage Rage light-heavyweight championship, whilst defending it twice prior to eventually vacating it. He had a rematch with the man he battled to a draw with, which he lost, and he avenged his only other defeat to date. 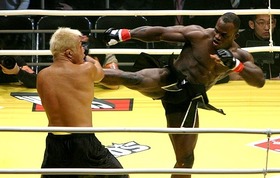 Manhoef would then go 6-2 over his next eight, winning all six victories via knockout, and being submitted with armbars in both defeats, to bring his record to 22-4-1. He was off to a great start, but he’d then run into multi-time, multi-organization world champion Gegard Mousasi, who submitted (triangle choke) him in just 88 seconds.

Following defeat to Mousasi, the Dutchman then became the first man to ever finish Mark Hunt with strikes and did so with a thunderous KO just 18 seconds into the opening round. Hunt is a professional boxer, and professional kickboxer, and he’s one of the most dangerous knockout artists in MMA history himself.

Manhoef also stands just 5’8” tall with a reach of 71”, and this fight of course took place at heavyweight. 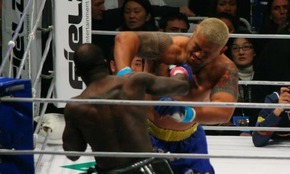 Hunt is the man that KO’d Roy Nelson with ease back in 2014, something literally no one saw coming.

That was an absolutely massive feather in Manhoef’s cap.

Manhoef was then submitted by 16-1 former WEC middleweight champion Paulo Filho, who boasts black belts in both BJJ and Judo, again with an armbar in the opening round, bringing his record to 23-6-1.

Following a first-round knockout victory in his next encounter, Manhoef would go winless in his next four outings (0-3, 1 NC), before going 5-2 in his next seven. This run saw him lay claim to the GSF welterweight championship. 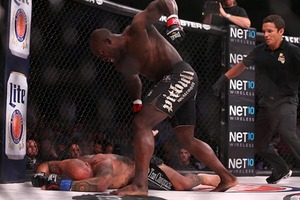 That fifth victory saw him victorious in his Bellator debut, where he violently KO’d fellow knockout artist and former three-time WEC light-heavyweight champion Doug Marshall, before he was KO’d by fellow kickboxing champion Joe Schilling in his next bout.

A no contest would come about in his next outing, against former Bellator middleweight champion Alexander Shlemenko, a fight he was also knocked out in. However, the Russian talent would fail his post-fight drug test and the result would be overturned.

Another KO victory would soon follow, this one over Hisaki Kato, a man that KO’d Joe Schilling in both kickboxing and MMA, before Manhoef was challenging Rafael Carvalho for his Bellator middleweight crown.

After an impressive performance over the course of five rounds, many believed Manhoef to be the victor. 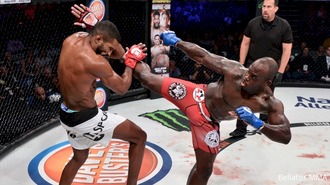 In fact, this is widely considered one of, if not the number one worst decision in MMA history.

Unfortunate for Manhoef, Carvalho was awarded the split decision victory when it was all said and done, marking the first defense of his newly claimed title.

Manhoef defended all of Carvalho’s takedown attempts whilst out-striking him merely the entire 25 minutes, this was truly a pitiful decision.

Considering the controversy surrounding the result of this contest, an immediate rematch took place that next Spring, seeing Carvalho victorious once again, this time via KO (head kick) at 3:15 of round four.

This was a much different fight, though Manhoef still had a considerable amount of success in it. Carvalho just made the proper adjustments and performed much better than he did in their first encounter.

Manhoef would win his next two bouts, one via unanimous decision and the other via knockout, before losing his 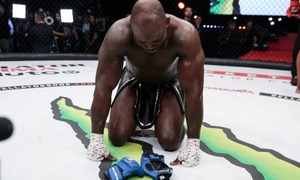 final two fights to Corey Anderson and Yoel Romero, getting stopped via TKO and KO due to ground-and-pound in both encounters.

This final defeat brought Manhoef’s record to 32-16-1-2, as it marked Romero’s eighth third-round knockout in his last ten victories, and the ninth overall throughout his career.

Though Manhoef did win titles in MMA, it’s too bad he was never able to add a world title to his resume, as he should have done. Judges can be terrible at times, and they cost him the Bellator middleweight championship.

Manhoef did lose a good amount later on in both his kickboxing and MMA careers, and he was knocked out quite viciously in a number of them. But, having fought a total of 103 bouts between the two sports, not to mention sticking around well into his mid-40’s, it’s to be expected. 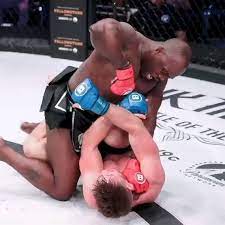 Of those 29 knockout wins inside MMA competition, 11 came via KO, and 18 came via TKO.

What’s more, 26 of those 29 knockout victories came inside the very first round.

Melvin Manhoef decided to retire from combat sports in September of 2022 at age 46 following his defeat to Yoel Romero at Bellator 285, ending his combat career with 70 total wins, 56 of which came via knockout. 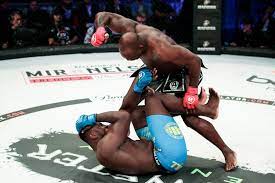 That is a man that’s incredibly profound in knocking people out, it’s just astounding. He was for the longest time known as the Mike Tyson of MMA for a good reason.

What was your favorite Melvin Manhoef moment?

If you enjoyed this piece, feel free to share it on social media!

I became a fan of combat sports when I was 12 years old. I was scrolling through the channels and landed upon versus, where WEC was televised. Urijah Faber fought Jens Pulver for the second time that night. That’s the first fight I saw, and the fight that got me hooked on the sport. Since then, the sport has grown so rapidly, and my goal is to enlighten everyone on what’s going on in the sport today.

The Glory Road: The Saga Lives On, By Steven D. Ayres, Receives Acclaim for Its Ability to Transport Readers Through Events in the Nation’s History with Authentic Writing and a Focus On Nostalgia