Inside the Chart | Starting To Translate:  It took time, but Sylvain Yondjouen, Georgia Tech’s Belgium-born defensive end, has started to round the corner from novice to pass rushing force.

If there was any doubt that Sylvain Yondjouen has acclimated to life in the Southeast, the proof is perched atop his head.

On a recent afternoon, the defensive end from Ruisbroek, Belgium walked around the Edge Athletic Center wearing a turquoise, tropical-themed hat… with the Waffle House logo on it.

Yondjouen got it at a career fair earlier this month for Georgia Tech student-athletes, but the 6-foot-4, 257-pounder has become a full-blown devotee of the 24-hour diner.  Like any good Southerner, he can proudly tick off his go-to order – which, technically, can double as a to-go order.

“Texas Bacon Cheesesteak.  And then I get my hash browns covered, smothered – that’s how you say it, right?” Yondjouen grinned.  In his French-tinged accent, it sounds more like smuddered.

“Sometimes double covered.  It depends on how hungry I am,” he continued.  “But I definitely get a chocolate chip waffle at the end.  I like them.  Those waffles are good.”

Because why wouldn’t a Belgian have a discerning taste in waffles?

In addition to breakfast menus, Yondjouen has also shown an increased mastery of rushing quarterbacks.  Four years after arriving on The Flats as the rawest of recruits, the junior has strung together some of his most productive outings over the past few weeks.  He enters Thursday’s matchup against Virginia at Bobby Dodd Stadium (7:30 p.m. ET, Georgia Tech Sports Network from Legends Sports) with a sack in three consecutive games.  He’s racked up more tackles for loss in that span (3.5) than he had in his first 26 games combined (1.0).

Defensive line was charitably considered an unknown for Georgia Tech heading into the season. With Yondjouen doing his part, the Yellow Jackets rank 33rd nationally in sacks per game and 18th in tackles for loss per game, a sharp climb from their numbers a year ago.

As he reflected on his recent run of production, Yondjouen smiled.  Put in the context of where he started, the 24-year-old can only laugh and cringe. 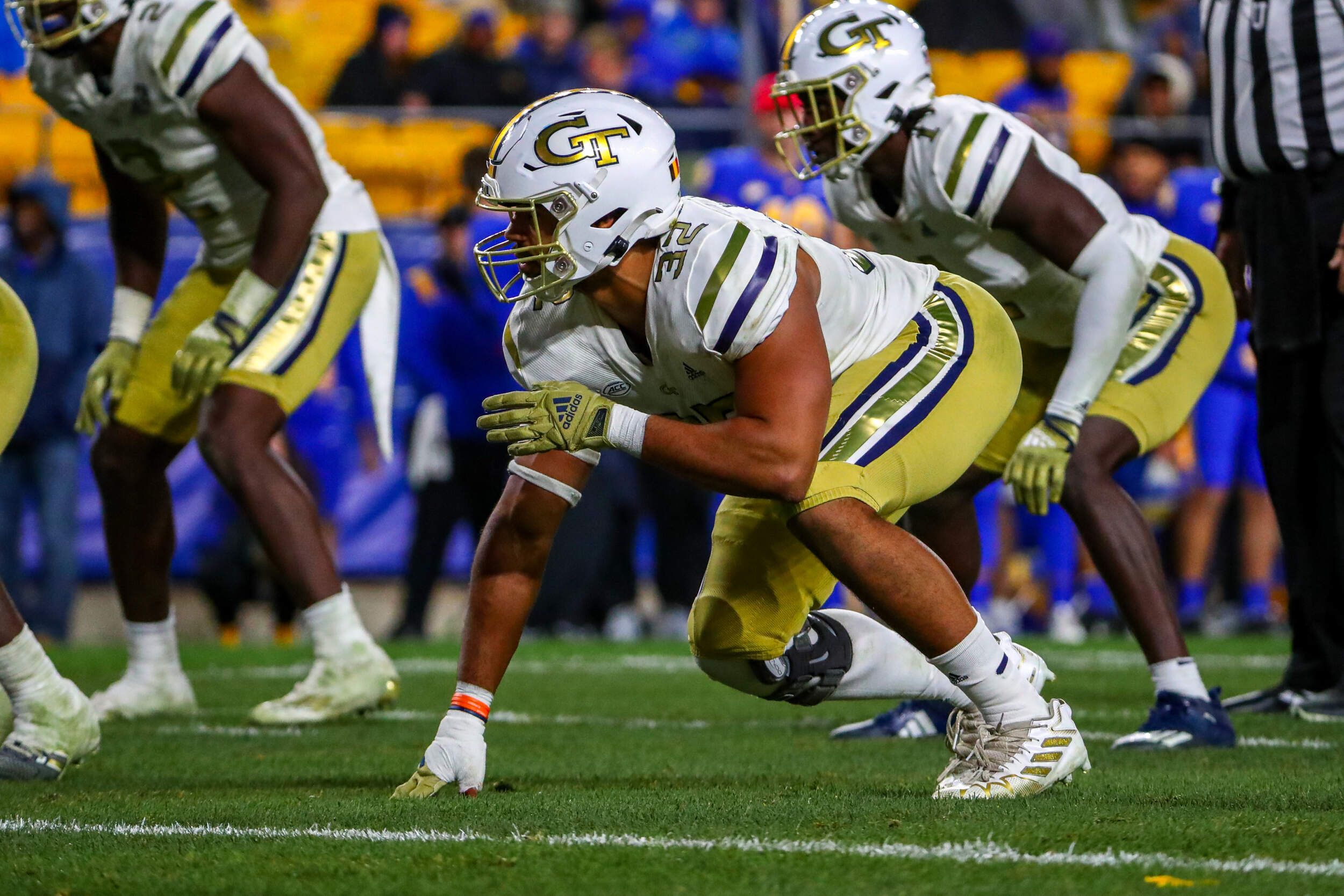 Foreign-born players all have their own origin stories of how they discovered American football – and the steep learning curve that inevitably gobsmacks all of them.

The second of four kids, Yondjouen grew up in Ruisbroek, a Flemish-speaking suburb outside the Belgian capital of Brussels (for the most authentic pronunciation, it’s “RAHS-brook,” with the r’s rolled).  He played soccer but admits it never appealed to him.  He dabbled in swimming and track and field.  But when he tagged along to watch one of his friend’s football practices at a 16-year-old, he was immediately hooked.

That led Yondjouen to joining the Brussels Black Angels, an amateur club that plays in the Belgian American Football League.  The team attracted players of all ages – Yondjouen joked that he’s pretty sure one of his teammates was 40 – but his size, speed and strength made him an intriguing prospect.  He eventually landed a spot on the Belgian national team.

It was at a game with the Belgian national team in 2016 that Yondjouen earned MVP honors and caught the eye of a scout.  That scout directed him to Premier Players International, a Germany-based service that exposes European football players to U.S. colleges and universities.  After turning heads at a few PPI combines in Germany, Yondjouen bought into their vision that he could one day earn a scholarship to play college football.  Georgia Tech coaches first evaluated him on a PPI tour of U.S. colleges in May of 2018.

To prepare for that possibility, Yondjouen knew he had to brush up on his English.  Belgium is a linguistic melting pot – French, Flemish and German are all considered official national languages there – and though Yondjouen didn’t speak English as a kid, he had experience switching between tongues.

“My Mom and Dad put me in a French-speaking kindergarten.  They were still living in the French-speaking part of Brussels, and then they moved to a Flemish-speaking [town] because they thought it was smarter for us to speak both languages,” he explained.

Yondjouen said he took extra English classes to prepare for the TOEFL, a standardized test that measures the English language ability of non-native speakers who wish to enroll in English-speaking universities.  He supplemented that by binging Netflix shows in French with English subtitles.  It worked the other way too: in Belgium, he said, Flemish-speaking people watch their TV shows in English with the subtitles in Flemish.

Learning the lingua franca of football was a different story.  Yondjouen had played the sport for nearly three years by the time he arrived at Tech, but football jargon evidently wasn’t one of the languages spoken in Belgium.  In his first position meetings, basic terms were met with blank stares.

“I had to know what was the boundary and what was the field.  And at first I had no idea what it was.  So that doesn’t start well as a D-end,” Yondjouen laughed.

His coaches have their own stories.  Defensive coordinator Andrew Thacker had to teach Yondjouen what an A, B, C and D gap was.  Defensive line coach Larry Knight remembers drawing a Y on his whiteboard, the universal playbook symbol for a tight end.

Yondjouen shot a hand in the air.

“He stopped the whole meeting.  ‘Coach, what’s the Y?’” Knight said.  “It was a huge learning curve coming from where he came from.  He did put the work in to learn those things.  But as a coach, you take those things for granted.” 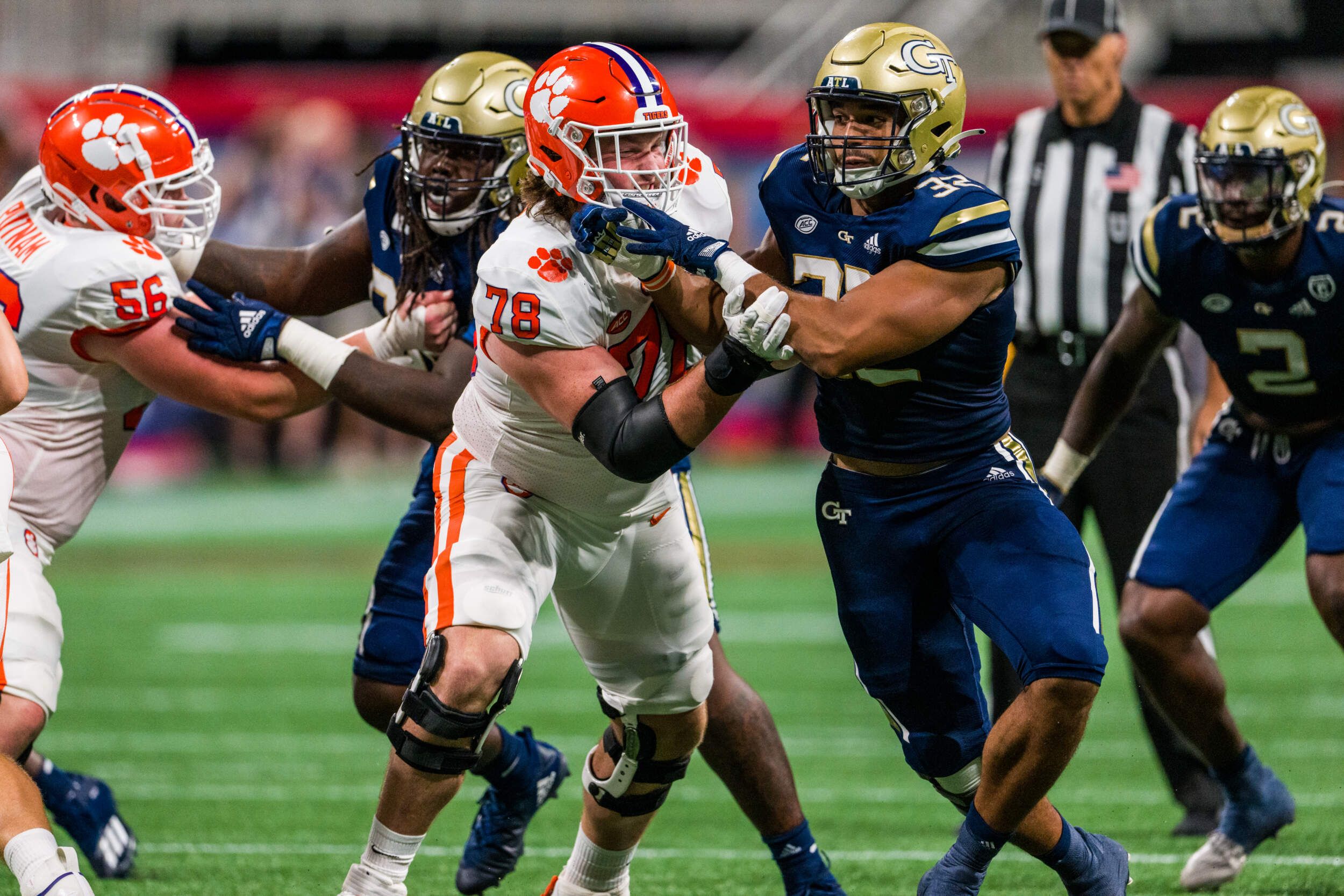 Yondjouen was still thrown into the rotation quickly.  He appeared in 11 games as a true freshman in 2019, making two starts and finishing with 12 tackles.  An injury ended his 2020 season after just three games.  He first showed a flash against Notre Dame in 2021, recording the first sack and forced fumble of his career.

Physical maturity was never an issue – linebacker Ace Eley teasingly calls him “Fabio” for his chiseled upper body, and Key jokes that “I don’t know if he’s 32 or 22.”  Learning the nuances, Yondjouen admits, took some time.  There’s still some terminology in the secondary that sounds alien to him.  But with the help of teammates and coaches, he slowly started to gain fluency at defensive end.  It’s unlocked a production that his head coach doesn’t believe has come by accident.

“He understands football now so much more than he did originally.  It’s starting to show up at really good times,” said Key.

“Sylvain brings things to the table that I can’t coach,” Knight added.  “One of them is his motor.  He never, ever, ever stops.  He just goes and goes and goes and goes.  And you get a guy like that who plays that hard automatically without you having to push him, and now you’re able to kind of fine-tune everything else, it’s really a credit to him.”

Yondjouen can attest.  Out of curiosity, he recently pulled up some clips on his tablet of a few games from his freshman year in 2019.

“I can’t remember the game, but it was a terrible game for me.  I ended up on the ground the first two plays.  I was like, ‘Man, I can’t watch this anymore,’” he said.

He and his teammates will look for more pleasurable viewing Thursday when they face a Virginia team led by senior quarterback Brennan Armstrong, who torched the Jackets for six touchdowns and 495 yards of offense in a 48-40 win last year.  Yondjouen took an unofficial visit to Virginia on his PPI tour of American colleges, and he said the Cavaliers pressed him for a verbal commitment.

With a chance to move above .500 for just the second time in his Georgia Tech career, Yondjouen doesn’t want to see his defense’s effort level slip.

“We’re really seeing that if you run to the ball, it’s going to end well.  We showed it.  We got sacks from just efforts, TFL’s from everybody moving the line.  It’s amazing,” he said.

Yet even as he hunts for his next sack, reminders of how far he’s come are never far from his mind.  Recently Yondjouen and Thacker walked to the Rose Bowl Practice Field together, their cleats clacking on the Brittain Drive asphalt.  They reminisced about Yondjouen’s early days as a Yellow Jacket, when he held his elbows out chicken wing-style rather than tucking them in as he tried to rush the quarterback.

“’I don’t understand how you guys kept me for that long,’” he told Thacker.

He’s glad he stuck it out – and opposing quarterbacks now have to get acclimated to a 257-pound Belgian bearing down on them.