Signing Durant and Kyrie: What could go wrong? For Nets, everything 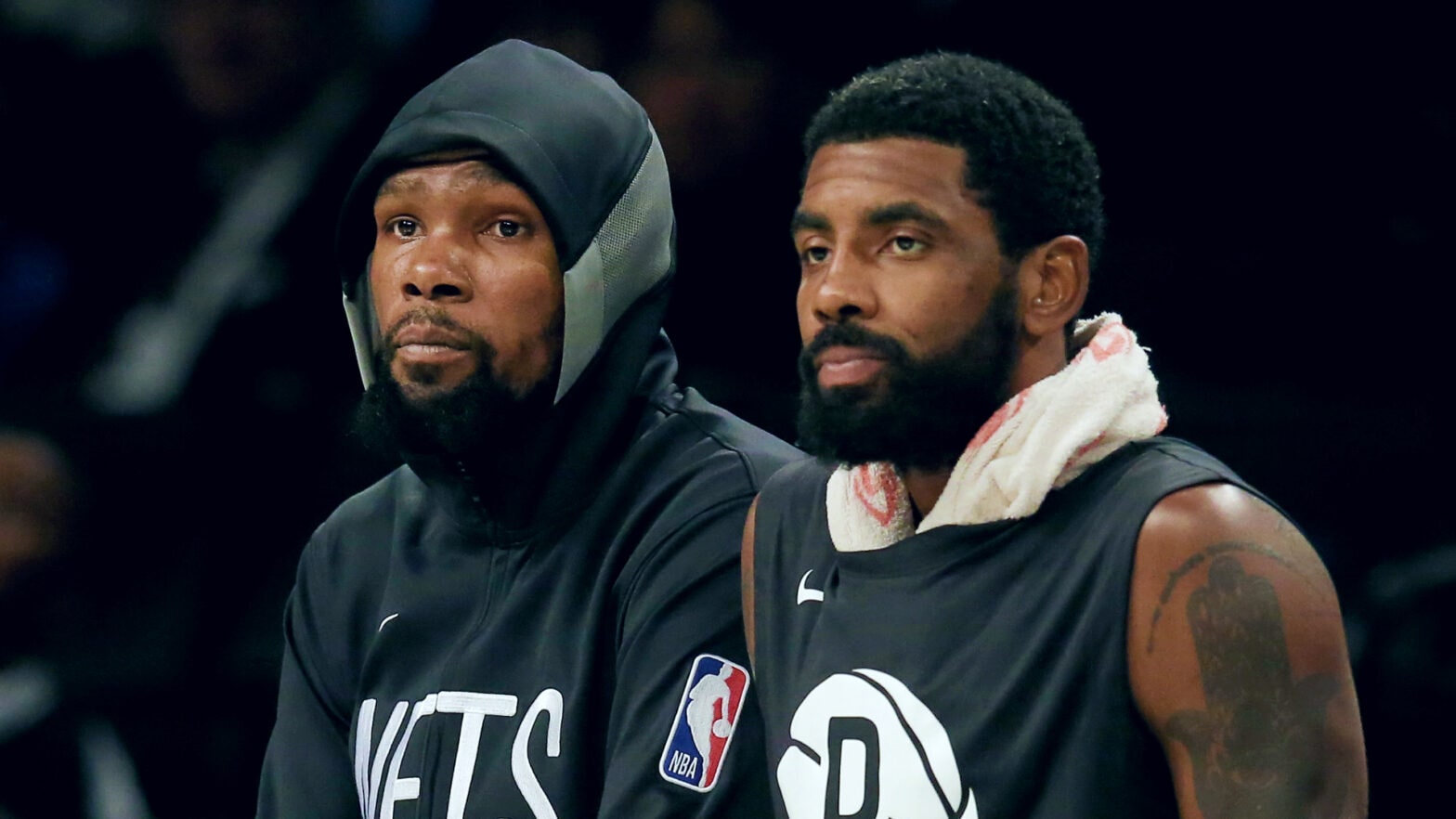 Kevin Durant and Kyrie Irving had big plans for Brooklyn when they signed the Nets in the summer of 2019.

Peace, plenty of promise and a purpose? It was all that and more in Brooklyn just three short years ago, which now seems like 30 years for a team that suddenly can’t go 30 minutes without making everyone ask again why Kevin Durant left a Golden State dynasty … for this.

Oh, yeah: Back in the fall of 2019, when these superstar-infused Nets opened camp instead of a can of worms, it all seemed so perfect. Sounded that way, too, as Durant and Kyrie Irving, after fleeing better teams in free agency, gushed about growing together and taking the Nets to new heights. What could go wrong?

It’s either hilarious or harrowing to rewind and listen to what was said then and compare it to now.

Durant, explaining why he was bullish on the Nets: “The basketball was appealing. They got the pieces and a creative front office.”

Durant, again: “I was doing a lot of YouTube research on Kenny Atkinson and I really liked his approach and that’s what drew me in pretty quickly.”

(Atkinson, a no-nonsense guy, lasted only one more season as coach before a rebellion.)

Irving, on the decision to team up: “With KD and [DeAndre Jordan]it was 4:16 in the morning, us just talking about our futures and how this opportunity ahead of us is something we haven’t had in our careers, talking in detail about the future and the investment we had in each other and the investment we wanted to have in Brooklyn, so it made sense, and then having the incredible people they have in the organization made it that much easier.”

You get the idea. Things changed, stuff happened, and not all for the better in Brooklyn, where a team built with championship aspirations is now bellyaching in the basement of the Eastern Conference, currently 1-5 and dealing with issues on the floor and away from it, both highly distracting if not irritating.

The dysfunction of the Nets can be blamed on superstar empowerment and how it can go wrong, and a frantic front office trying desperately to salvage the situation, and a devalued Ben Simmons whose confidence seems, ahem, “shot,” and the beleaguered and perhaps overmatched Nash, and a “deep-thinking” point guard whose skill for stirring up drama matches his tricky dribbling.

Of course, the Nets can throw all of this in reverse and rise in the standings by the end of the month; that would speak to the supreme talent of Durant and Irving, both averaging more than 30 points and still capable of taking over a game. But here and now? To quote former Net Micheal Ray Richardson, who once famously sounded the alarm in New York a lifetime ago: The ship be sinking.

Could it be that the high-water moment of these Nets will forever be Durant stepping on the 3-point line a few years ago against the Bucks in the playoffs? Because almost everything since then has been troubling and a drag to their lofty expectations.

The Nets swapped a handful of promising young players (Caris LeVert, Jarrett Allen) two years ago for James Harden, a former Kia MVP whose arrival only elevated the perception of the Nets as a potential dynasty. But Harden rapidly became frustrated and bailed for the Sixers, who were only too willing to send back Simmons in exchange.

Speaking of … remember those strategically-placed social media videos last summer showing Simmons dropping a string of 3-pointers in workouts? Well, he still hasn’t shaken the stigma of being allergic to outside shooting. He has attempted only one 3 this season, missed it, and hasn’t posted a double-digit scoring game while the defense gives him plenty of room. He’s averaging 6.2 points and 4.3 fouls a night. Remember, while Simmons has never been a volume shooter, his career average was 16 points before this season.

As a three-time All-Star, he hasn’t had an impactful game at either end of the floor through six career games in Brooklyn, raising legit questions about how he fits and whether he’s still bugged by the public flogging from the infamous playoff series between the Sixers and Hawks two years ago.

Irving was caught on a hot courtside mic pleading for Simmons to “shoot it” last Wednesday in a loss to the Bucks. Irving later said he was being supportive, and scolded the public by saying “give him a (bleeping) chance,” but added:

Irving knows something about confidence; he’s off to a terrific start and confirming his place among the top-dozen players in the league. Of course, that’s not the topic of discussion swirling about him right now. When Irving took to social media last week to seemingly support a movie seen as antisemitic, the NBA took the unusual step to condemn hate speech — without citing why or who was the reason for making a statement in the first place.

But everyone with a login and a password knew.

That’s the thing with Kyrie since joining the Nets: He has managed to divert attention away from his consistent and often brilliant performances by embracing social, medical and political stances he believes are bold and meaningful, while a segment society — and his own team and league — see him as being irresponsible at best and reckless at worst and definitely uninformed. The only certified experts he listens to are those in his head. And every time the outside world pushes back against him, Kyrie becomes more defiant and doubles down.

It’s the primary reason the Nets refused to offer him a contract extension last summer, which obviously raises serious doubt about his future with the team once he becomes an unrestricted free agent next summer. And if Kyrie leaves without a sign-and-trade, the Nets get zip in return — and therefore Durant loses yet another vital teammate as he begins to reach his mid-30s, leaving the former MVP to most certainly ask again for a trade.

After losing at home Saturday to the lowly Pacers, their fourth straight stumble, the Nets players met internally and aired their complaints. Simmons called the discussion “honest” and Durant described the mood as “somber” because the Nets can’t fool themselves or anyone else — the early season has been disastrous by every metric.

Nash, who is typically measured in public even after the toughest of losses, said: “We have to look deep inside ourselves and what we want to do. What do we want to accomplish? Do we want to give up on this because it’s been difficult early or do we want to stay the course and start to build something? We’ve had a lot of really good days here early in the season and we’ve lost a couple games and it’s shook our mentality hard. And we’re not seeing the same competitive spirit, same purpose, and if we don’t clean that up it’s not going to get better.”

If this keeps up, the price will likely be Nash’s job next season if not sooner, although the struggles of the Nets can also be traced to the fog surrounding Simmons, injuries to Seth Curry and Joe Harris and the absence of a quality big man/rim protector. The Nets are allowing 122.2 points, next to last in the league, another major worry.

The schedule does get lighter. That will help. A rematch of the Pacers is Monday, followed soon by the Wizards, Hornets, Kings … and the lightning-rod Lakers, the Nets’ identical twin brother living in the Western Conference.

The NBA season is funny, weird even. Keep that in mind. Misery can turn into happiness in a matter of a week. Especially since the young NBA calendar is just hitting Halloween. Especially for a team bringing Durant and Kyrie. Yesterday’s narrative can have a spectacularly short shelf life.

Durant was therefore being reasonable when he said: “We got a lot of basketball to be played ahead of us.”

This much is true. But it’s also fair to revisit an old Kyrie statement, well before he took his controversial stances, well before Simmons and Nash arrived, even before Durant and Kyrie first broke a sweat in a Nets’ uniform, and raise an eyebrow while reading it.

“We want to end our careers together,” he said in 2019, when life with the Nets was fresh and new and less complicated. “We want to do this as a team, and what better place to do it than Brooklyn?”

Shaun Powell has covered the NBA for more than 25 years. You can e-mail him here, find his archive here and follow him on Twitter.

The views on this page do not necessarily reflect the views of the NBA, its clubs or Turner Broadcasting.