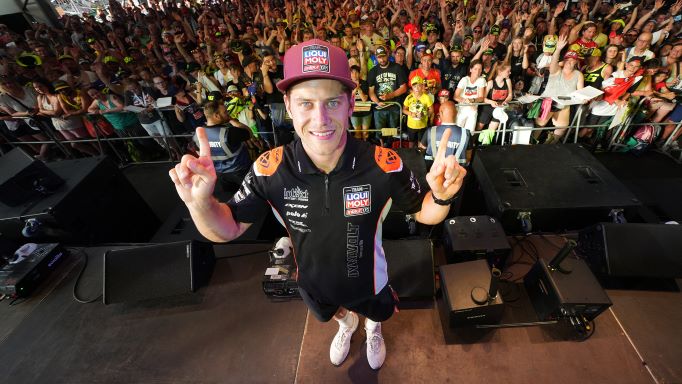 Another new name will take to the FIM Supersport World Championship grid in 2023 as Marcel Schrotter links up with the MV Agusta Reparto Corse squad for next season, alongside Turkish rider Bahattin Sofuoglu. Schrotter becomes the latest name to make the switch to WorldSSP after a career in Moto2™ and he will be looking to make an instant impact on the Championship as he switches paddock for next season.

Schrotter has competed in Moto2™ since the 2012 season, when he made a mid-season switch from Moto3™ and made his debut at the Indianapolis Grand Prix; competing in Moto2™ in every season since his debut. The German has racked up five podiums in his Moto2™ career, with a best of second at the Americas Grand Prix in 2019 in a run of three podiums in the 2019 season. His first podium came in 2018 at the San Marino and Rimini Rivera Grand Prix when he took third, while he also claimed one podium in 2020 at the Austrian Grand Prix.

For 2023, the 29-year-old will join the MV Agusta Reparto Corse alongside Bahattin Sofuoglu for his rookie WorldSSP campaign, while Sofuoglu embarks on his second campaign with the team after a stellar rookie campaign which has seen him lead the WorldSSP Challenge title fight. He heads into the Portuguese Round as the leader in the WorldSSP Challenge, leading his nearest rival by 28 points with 50 available.

Schrotter said of his move to WorldSSP: “First of all, I want to thank Andrea and MV Agusta for their trust in me and giving me this opportunity. I’m really looking  forward to this new chapter of my career and can’t wait to start working with MV and the new Team. I’m very excited to be part of MV Agusta history and I want to make history with MV Agusta! See you soon!”

Andrea Quadranti, Team Owner, added: “We are thrilled to have reached an agreement with Marcel. He is a highly experienced rider whom we have been following with our partner Matica for some time. I believe that he is the right rider for our reality. He will be able to build on his experience gained in Moto2 to help the team grow both technically and in terms of results. We can’t wait to to carry out the first test with him and start working to be competitive from the first race on the calendar!”

Watch the remainder of the 2022 WorldSSP in style using the WorldSBK VideoPass!


Work to do for MIE Racing Honda Team at Portimão


Pirelli Portuguese Round WorldSBK 2022   Round 09 The MIE Racing Honda team has been out at the Autódromo Internacional do Algarve in Portugal today, competing in the first free practice sessions of the ninth Superbike World Championship round.In warm and sunny conditions, the squad’s riders Leandro ‘Tati’ M more >>


Race pace the target for Team HRC at Portimão


Pata Yamaha with Brixx WorldSBK rider and defending WorldSBK Champion Toprak Razgatlıoğlu topped Friday’s Free Practice with a commanding lap time of 1’40.720, as the ninth round of the 2022 FIM Superbike World Championship kicked off at the Algarve International Circuit in Portugal today.     more >>


The GYTR GRT Yamaha WorldSBK Team returned to action today at Autodromo Internacional do Algarve in Portugal, with Garrett Gerloff ending the day third fastest on combined times. The Texan’s teammate, Kohta Nozane,endured a difficult day but improved his lap time this afternoon to finish in 22nd position.     more >>


18-year-old Spaniard Unai Calatayud starred on Friday to claim pole position in the first edition of the Yamaha R3 bLU cRU European SuperFinale held at the Autodromo Internacional do Algarve, with the front row separated by just 0.248s. more >>


The BMW Motorrad Motorsport family is mourning the death of Chrissy Rouse (GBR). The 26-year-old Briton passed away on Thursday, succumbing to the serious injuries suffered last weekend in an accident in the British Superbike Championship at Donington Park (GBR). It was with great dismay and sadness that BMW Motorrad Motorsport received the news of Rouse’s death.  more >>


This weekend the FIM Europe Motocross of European Nations returns, with the fastest riders in Europe gathering in Talavera de la Reina, Spain, for one big racing weekend where they will hope to put their nation on the top step of the box!


Rinaldi rockets to WorldSBK FP1 honours at Portimao ahead of Gerloff, Bautista P5 behind rivals


#PRTWorldSBK WorldSBK PortugalPortimao, AlgarveOctober 7th-9th All eyes were on the riders and all ears were glued to what they had to say, with a new kind of silly season starting after recent tests, as well as approaches for t more >>


Syahrin and Mercado reunited for the Portuguese WorldSBK Round


Pirelli Portuguese Round WorldSBK 2022   Round 09 The MIE Racing Honda Team prepares to take on the Autódromo Internacional do Algarve in Portimão, Portugal, the stage for round nine of the 2022 Superbike World Championship. more >>


The Aruba.it Racing -Ducati team is ready at Portimao for the final European round of the 2022 WorldSBK season


World Superbike 2022 R9 Portimao, Portugal7-9 October 2022It is the ninth round of the 2022 WorldSBK season, the last in Europe before overseas trips to Argentina, Indonesia, and Australia.After a fantas more >>


Team HRC ready for last continental round in Portimão


Round nine of the Superbike World Championship sees Team HRC and factory riders Iker Lecuona and Xavi Vierge travel to Portugal, and the Autódromo Internacional do Algar more >>


After a returning to the podium at the Catalan round, the GYTR GRT Yamaha WorldSBK Team is looking forward to the ninth round of the 2022 FIM Superbike World Championship at Autodromo do Algarve, Portugal.     Previously in C more >>


Rider standings ahead of X-Trial Andorra 2022


X-Trial Andorra 2022 X-Trial 2022   Round X-TR5 The Repsol Honda Team duo, Toni Bou and Gabriel Marcelli are set to compete in the final event of the 2022 X-Trial World Championship this Saturday. more >>


Double podium for the Ducati Lenovo Team in the Thai GP


.. with Jack Miller second and Pecco Bagnaia third in Buriram. The Italian rider is now -2 points off leader Quartararo The Grand Prix of Thailand, held this weekend at the Chang International Circuit in Buriram, ended with a double podium for the Ducati L more >>


Monster Energy Yamaha MotoGP‘s Franco Morbidelli showed good pace in the delayed Thailand Grand Prix, taking 13th place. Fabio Quartararo didn‘t have a good feeling in the extremely wet conditions and was unable to push like he wanted. He ended the race in 17th.Mo more >>


Cal Crutchlow and Darryn Binder struggled in the wet conditions of Buriram today.The Thailand Grand Prix developed to be a tricky one for the WithU Yamaha RNF MotoGP Team today. After all sessions throughout the weekend took place in dry conditions more >>


MotoGP 2022 – Round 17 of 20, Chang International Circuit – RaceA hot, wet and demanding OR Thailand Grand Prix was the scene for Red Bull KTM Factory Racing’s Miguel Oliveira to take his KTM RC16 to the top step of the pod more >>


LCR Honda CASTROL rider Álex Márquez produced a superb ride in wet conditions to take 8th position at Sunday’s Grand Prix of Thailand. The race was delayed by an hour due to a deluge of rain at Buriram and, when the action finally got underway, it was on a sodden track at the Chang International Circuit. more >>


LCR Honda IDEMITSU rider Tetsuta Nagashima toughed out challenging wet conditions to finish the Grand Prix of Thailand in 22nd position. Standing in for injured compatriot Takaaki Nakagami, the 30-year-old battled through 25 laps of a drenched Chang International Circuit to bring his Honda home at round 17 of the MotoGP World Championship. more >>


The love of enduro sport is what unites those competing in the FIM Enduro Vintage Trophy (EVT). That and an unwavering passion for classic dirt bikes. But for most competitors, enduro events are all about pleasure, not work. Not for Portuguese rider Pedro Mariano. more >>