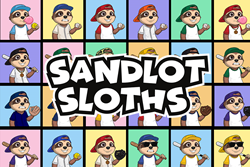 Sandlot Sloths is a collection of 5,944 hand-drawn sloths ready to play ball on the Ethereum blockchain.

Our goal is to build a community of baseball fans that share a passion for America’s Pastime while supporting young people from underserved communities with the opportunity to play.

Sandlot Sloths has teamed up with Major League Baseball’s Reviving Baseball in Inner Cities (RBI) Youth Program to launch its NFT collection of 5,944 hand-drawn sloths. Each sloth acts as a membership pass to the Sandlot Sloths community; a collective of baseball fans who share their love for the sport through IRL experiences and merchandise, all while supporting underserved communities through its charity partner.

The Sandlot Sloths NFT collection was created with both native and non-native NFT enthusiasts in mind. By owning a Sandlot Sloths token, not only do holders gain access to an entire community of baseball fans, but they are also eligible to receive a number of perks associated with owning a token, including:

“Having worked in Minor League Baseball for a number of years, my passion for baseball has only continued to grow,” said founder Jonathan Levey. “Our goal is to build a community of baseball fans that share a passion for America’s Pastime while supporting young people from underserved communities with the opportunity to play. Sandlot Sloths is how we aim to accomplish this.”

Those who join the pre-sale access list have the opportunity to mint a Sandlot Sloths NFT early for a discounted price of 0.042 ETH on October 27. Otherwise, the public mint begins October 28 and will be available for 0.06 ETH.

To get on the access list, join the Sandlot Sloths Discord and type “!homerun” in the general channel. This will ensure a discounted price and early access to the mint.

Sandlot Sloths partnered with Major League Baseball’s youth program — Reviving Baseball in Inner Cities (RBI) — to provide access to baseball and softball league play for underserved communities across the country. For every Sandlot Sloths NFT purchased, 20% of all initial sales will be donated to RBI to ensure that every child has the opportunity to play in a wide range of organizations that are affiliated with the program.

Furthermore, 2% of all secondary sales from the Sandlot Sloths collection will be donated to RBI on a monthly basis. Holders of Sandlot Sloths NFTs get fractional voting rights to decide how the funds are distributed and used by the program.

“On behalf of Major League Baseball, I want to thank Jonathan Levey and his Sandlot Sloths NFT for their support of the RBI program,” said David James, Vice President of Baseball & Softball Development, MLB. “The RBI program continues to provide opportunities to underserved children and communities, and their generosity will certainly help our efforts in strengthening the program around the world.”

Sandlot Sloths is an exclusive baseball-focused community open to holders of its non-fungible token (NFT). The membership is purchased on the blockchain as a NFT and owned by the token holder to gain access to special perks, one-of-a-kind experiences, as well as a vote on how charity funds are distributed.

Sandlot Sloths was created by its dedicated founder, Jonathan Leveywho’s worked in digital marketing for over a decade helping to launch several brands in addition to experience working in Minor League Baseball for seven seasons. Jonathan is supported by his Strategic Advisor, Jarrod Parkerwho’s a retired Major League Baseball pitcher for the Arizona Diamondbacks & Oakland Athletics.

“The idea and mission of the Sandlot Sloths building a project to support youth baseball was a no-brainer for me to join,” said Jarrod Parker. “I’m more than excited to bring energy and resources to help the Sandlot Sloths grow and drive an initiative with purpose… to the moon. Bringing players, fans and community together through NFTs is the future.”

About Reviving Baseball in Inner Cities:

Reviving Baseball in Inner Cities (RBI) is Major League Baseball’s youth outreach program that supports youth-serving organizations providing access to baseball and/or softball league play for their communities. RBI focuses on opportunities for youth in underserved communities, but also wants to ensure that every child has the opportunity to play. There is a wide range of organizations that are affiliates of RBI from Major League Clubs, Minor League Clubs, Park & Recreation Departments, Boys & Girls Clubs, and other independent community organizations. Level of play and types of programming vary from organization to organization, ranging from grassroots entry-level programming, league play, competitive tournament play, and academic enrichment, allowing the organizations to provide opportunities for all.