Toni Kroos has reached a milestone in Spanish football.

The German midfielder celebrated his 250th appearance in La Liga, and spectacularly marked the occasion.

Kroos made his debut in La Liga by coming on as a substitute against Córdoba in 2014 and made his 250th appearance against Barcelona in the first competitive El Clasico of the season.

Kroos highlighted just why he’s still with Madrid since that first game, as he was instrumental in Los Blancos’ first goal. 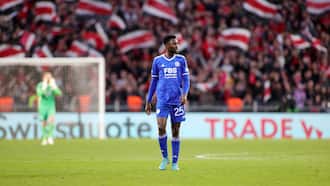 Wilfred Ndidi: Rodgers reveals when the Super Eagles star will return from injury

The German midfielder sprinted through the middle as Madrid pushed forward and shook off pressure from Sergio Busquets. Despite Busquets trying to pull him down, Kroos managed to hold his ground until he was able to find a brilliant through ball to Vinícius Júnior.

The Brazilian attacker found himself coming face-to-face with Marc-André ter Stegen and got a shot on goal, but the keeper parried the shot away.

Sadly for Barca, the ball fell into the path of Karim Benzema, who made no mistake in finding the back of the net.

Kroos has always been instrumental in Madrid’s attacks over the years. The midfielder scored 19 times in the Spanish league and notched up 61 assists. Overall for Madrid, he’s played 376 games, scored 25 goals and managed 86 assists.