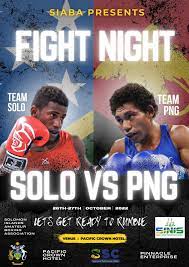 Assistant Commissioner (AC) National Capital and Crime Prevention (NCCP) Mr. Simpson Pogeava says, “This was a successful event where police deployed a good number of officers to provide high visibility during the game.

AC NCCP Pogeava explains: “You have shown that you are law abiding citizens. Such an image will convince other countries in the Pacific that the Solomon Islands is safe to host such events in the future. There were no incidents reported at Pacific Casino where the tournament was held.”

Mr. Pogeava adds: “I would like to thank my officers and Solomon’s International Assistance Force and Royal Papuan New Guinea Constabulary who took part in the successful operation. I would also like to thank those private security company who worked very closely with police in making sure people enjoyed the event.”

The event was hosted by the Solomon Islands Armature Boxing Association (SIABA) and the Honourable Prime Minister Manasseh Sogavare as the guest of honour during the two days event.


EIN Presswire’s priority is source transparency. We do not allow opaque clients, and our editors try to be careful about weeding out false and misleading content.
As a user, if you see something we have missed, please do bring it to our attention. Your help is welcome. EIN Presswire, Everyone’s Internet News Presswire™,
tries to define some of the boundaries that are reasonable in today’s world. Please see our
Editorial Guidelines
for more information.