Nigerian striker Victor Osimhen has finally reacted to his first club career hat-trick that he scored against Sassuolo, thereby recording his name in the history books of the Italian Serie A.

The Super Eagles man has so far this season proven himself as one of the best strikers in Europe and his performances have made him a target for many clubs.

Clubs like Manchester United, Arsenal and Spurs are said to be interested in the signing of Osimhen when the January 2022 transfer window opens. 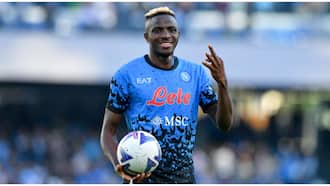 In the game against Sassuolo, Napoli recorded a 4-0 win which helped them to maintain their top position on the Serie A standings.

What record did Osimhen equal?

According to the report on Soccernetthe 23-year-old explained that he wants to do more this season.

“That was my first professional hat-trick so I’m really excited about it. It’s been a great return after a few challenges at the start of the season and hopefully I can continue this form.”

“As a striker, you always want to help your team so I want to stay hungry for more,” added Osimhen. 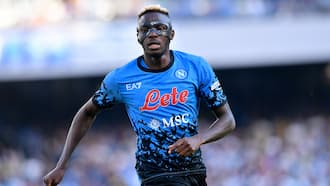 Didier Drogba hails Victor Osimhen, reveals why he is a complete striker

Earlier, Sports Brief had reported how former Chelsea star Didier Drogba hailed Nigerian striker Victor Osimhen for his brilliant performances so far this season for Napoli, who are topping the Serie A table.

Osimhen keeps giving Napoli fans cause to celebrate with his impressive goalscoring form, even netting a hat-trick in his side’s last game against Sassuolo.

The moment that caught the attention of Drogba was when the Ivorian saw Osimhen giving his teammate the chance to play a penalty – instead of playing it himself.

Drogba was impressed with what Osimhen did and saluted the Nigerian as a ‘complete and unselfish striker’.