The IFF Referee Committee has nominated seven referee pairs from six different countries to the Men’s World Floorball Championships 2022. The committee also nominated Mr. Mattias Linell from Sweden, as the Head of the Referees. Mr. Petr Seda from Czech Republic, Mr. Adrian Kretz from Switzerland and Mr. Sami Rahikainen from Finland are the referee observers in this event. 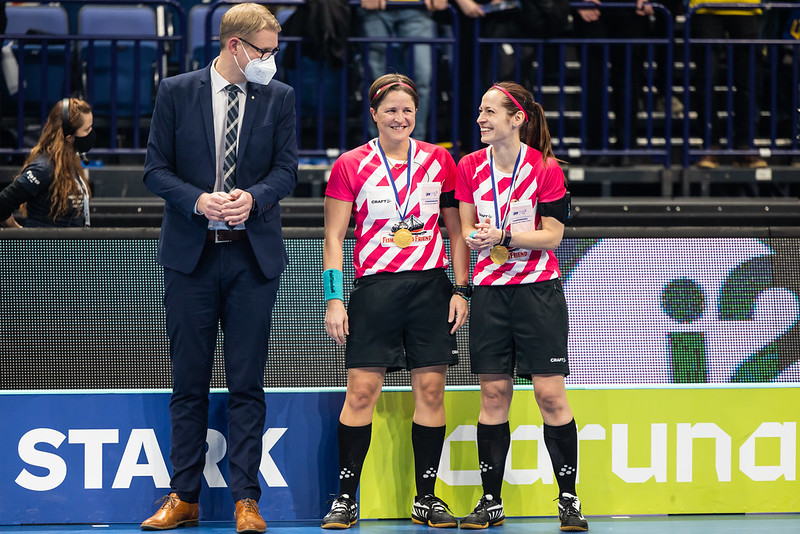 Corina: This is by far the Men’s WFC Final in Helsinki. The whole atmospehre and the fact that we worked so hard to reach this goal made it a once in a liftetime experience.

Corina: We referee in the highest men’s league in Switzerland.

Corina: I enjoy being part of the game and being responsible for the fairness of the game in terms of sticking to the rules but also making sure that the game is going smoothly. Allow good and positive emotions but on the other hand stop negative vibes and unfairness  immediately. This is a huge balance between the different emotions. To feel this thin line and to foresee those situantions is what makes it so interesting and fun.

Sandra: That we can play our part in ensuring that the teams play a fair, fast and attractive game.

Corina: I work as a psychologist in the police force of the city police of Zurich. 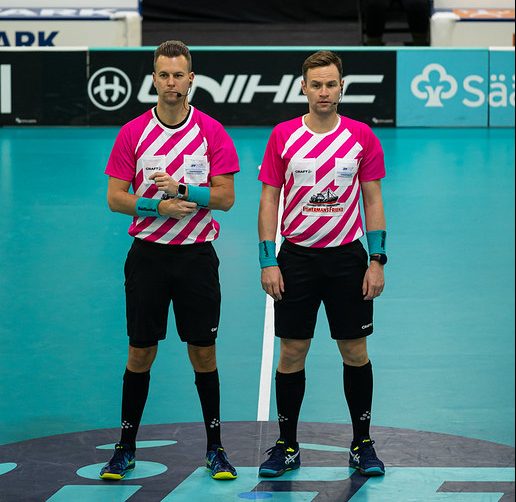 Janne: The atmosphere in the Finnish top league finals last season was really great and unforgettable.

Thomas: Challenge, speed of the game, unexpected situations and the process trying to get ready for them.

Janne: I love that it always puts new challenges in front of you and you can always develop to be a better referee. 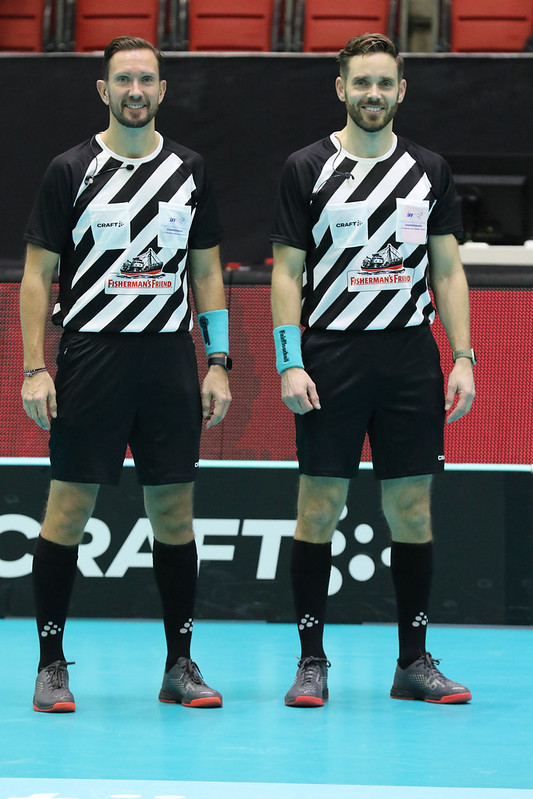 Thomas & Rickard: We really love floorball and all our games. But of course, the biggest games give great memories. This will be our 4th consecutive WFC as a referee pair and we are looking forward to many more great memories from Switzerland!

Thomas & Rickard: When we manage it together with players to find the great flow and pace of the game that Floorball represents – that´s the best feeling! Outside the great games themselves the memories and persons around – ref colleagues, IFF-staff and LOC. All fantastic persons dedicated to the best sport ever – Floorball!!

Thomas & Rickard:  Thomas works as a Global Key Account Manager within Telecom and Rickard as Managing editor/chief planner at the Swedish Police. From there we bring leadership and communication skills that very well apply on referee profile.

Jakub: For me every game is memorable. The international level is always memorable and I’m enjoying it a lot.

Vlastimil: My most memorable game was from last WFC in Helsinki, Thailand vs Singapore which was full of speed and emotions and I enjoyed it a lot.

Vlastimil: Referee of Czech highest league since 2007, IFF level since 2015.

Jakub:  I like to lead both teams to enjoy fair game and floorball.

Vlastimil: Floorball is sport of my life and after being active player and youth coach, I have been enjoying to stay with the sport as a referee and I like to enable both teams to enjoy fair game.

Jakub: I work as chef of operation (COO) at Czech Floorball, being responsible for evidence, IT systems, legislation and office.

Vlastimil: I work as Sales Director at Adidas, being responsible for Strategic Sport Accounts in East Europe. 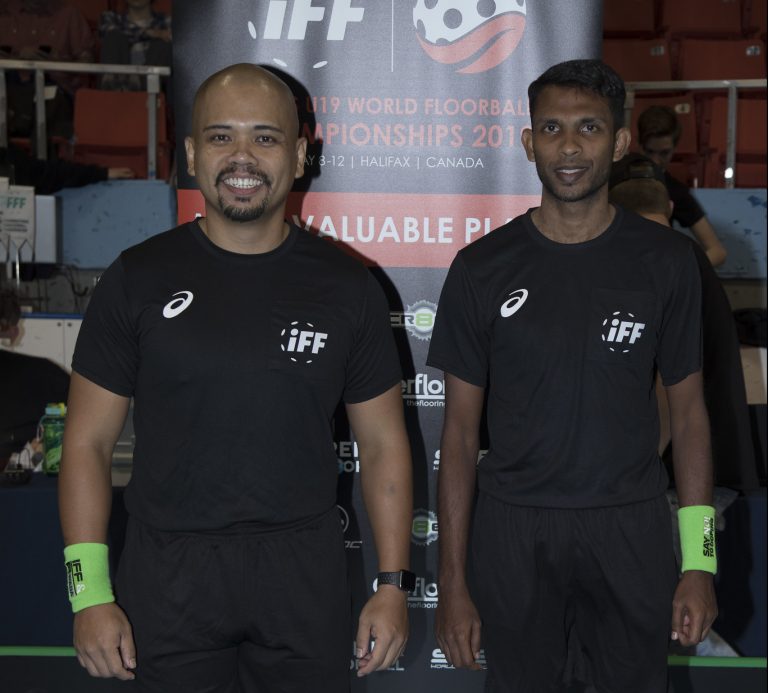 Sharil & Oswind: The most memorable game for us as a pair was during the WFC 2020, Norway vs Czech Republic because that was our first Top 8 teams’ game.

Sharil & Oswind: We are currently refereeing in the Singapore League.

Sharil: Keeping myself in good shape and sharing referee development ideas with other colleagues.

Oswind: Learning new refereeing skills whenever we have our tournament either from the observers or colleagues.

Sharil & Oswind: We both are Sports Coordinators working in schools in Singapore. 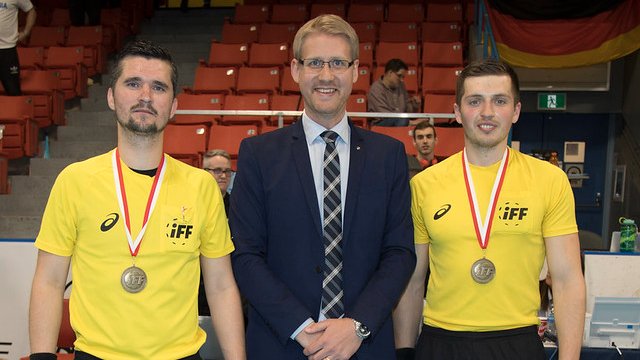 Maris: Gold medal game in the Men’s U19 WFC.

Kaspars: I enjoy the most being part of IFF family and meeting new people in every event.

Maris: To meet a lot of new people and being part of big floorball family. 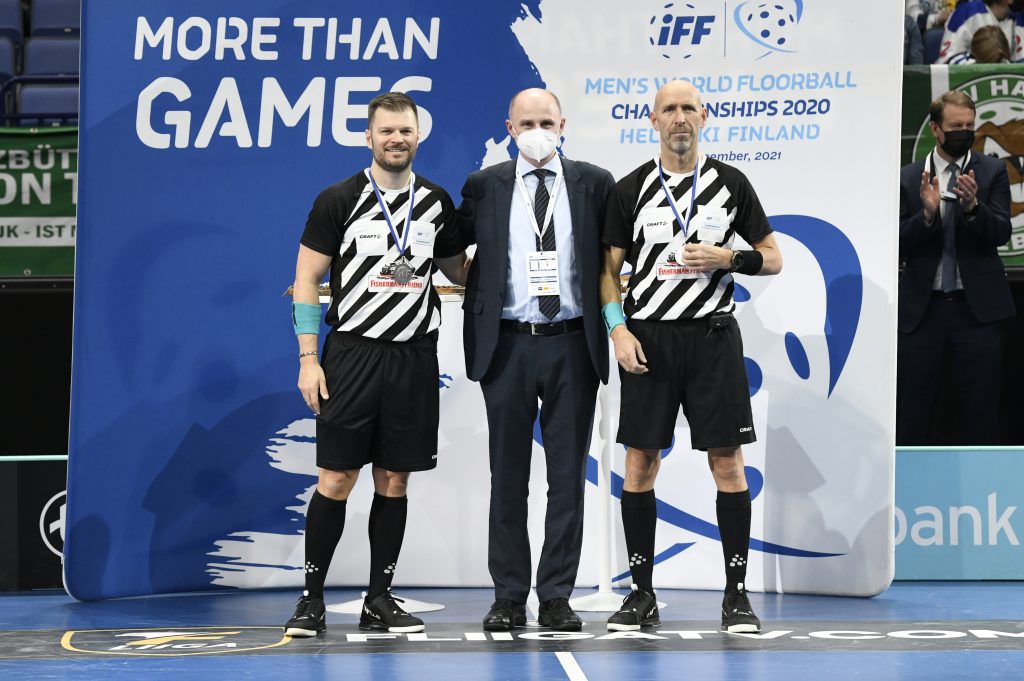 Håkan: My first semifinal in WFC 2010 I Hartwall Arena between Finland – Czech Republic. And also the Swedish Superfinal 2016 in Tele2Arena when there were 18,166 spectator.

Glenn: The Swedish final last year’s comes to mind. But in the WFC the last bronze match I would say.

Glenn: I have 541 games in the Swedish League.

Håkan: To be a part of floorball and all friends I have meet.

Glenn: Game management and getting the players to have a fluent game.

Håkan: Working with Floorball in local district in Sweden (Smaland/Blekinge).