Jen Rahne sat at her son Jake’s lacrosse practices when a familiar scene kept playing out. Brooke Corson, whose son, Silas, was also on the team, walked into practice with a puppy. A few practices later, she walked in with a different puppy.

And it kept on happening.

Eventually, Rahne had to strike up a conversation and figure out where all these puppies were coming from. And where they were all going.

Corson explained that she was the founder of Mutts with a Mission, a group that enrolls puppies in a two-year program — 18 months at a caregiver’s home and six months back with Corson and the organization — to train them as service dogs before permanently placing them with disabled veterans, first responders and law enforcement dealing with disability issues, mobility issues, PTSD or other ailments for no cost to the recipient of the dog.

Rahne loved what she heard. Her sons, Jake and Ryder, were on board. But her husband, Old Dominion head coach Ricky Rahne, was resistant. The family already has a curmudgeonly, 10-year-old Old English Bulldog named Lady and a Saint Bernard named Kodiak. 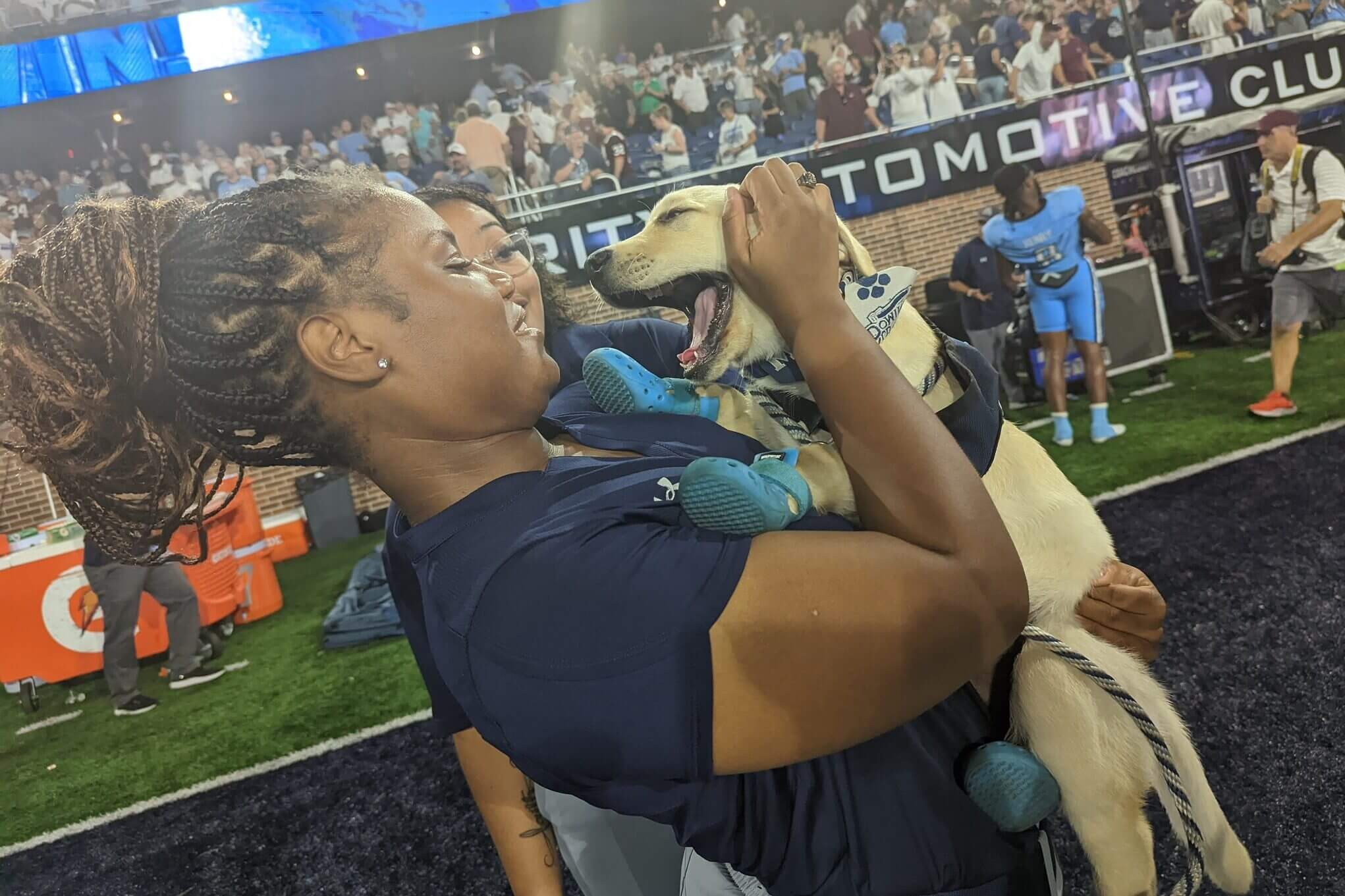 Ricky Rahne vetoed the motion for a third.

But she argued they could sponsor a dog to help support the organization. Thus, the relationship among Corson, Mutts with a Mission and Old Dominion began.

“A bunch of players were walking out of the building as we were walking in, and a lot of them turned right back around,” Rahne said. “They were like, ‘We don’t know what’s going on, but we’re following the puppy train.’”

Corson let them loose in the weight room after players had finished their conditioning and weights for the day. The puppies went wild for a few minutes before making their way back to Corson. All except one.

“He was chilling with all the guys, sitting under some weightlifting equipment, and he was wearing light blue, and we were like, ‘That’s our dog,’” Rahne said.

They narrowed the possibilities of names to King or Hudson and let ODU’s players vote. The name Hudson stems from former sports information director Carol Hudson, who also spawned the name Hudson Blue, a color ODU’s sports teams wear occasionally. Hudson won the players’ vote, and the team already has taken to most often calling him “Lil’ Huddy.”

Hudson lives with Corson but is sponsored by the Rahne family. In the two months since, he has grown into the team’s unofficial mascot.

Corson, a veteran herself and a fan of college football, has made Hudson a frequent fixture at practices and team events when he’s not busy with his day job: training to be a service dog. He learns to do tasks like going to get help, reminding his owner to take medication and retrieving dropped items. He learns to ride public transportation and the ferry as well as going through TSA checkpoints at the airport and flying before being paired with his forever home.

“He’s got a whole list of stuff he has to do before he gets paired,” Corson said. “But this experience, after all this, he’s going to be bomb-proof. … He’s handled everything. When they shot the Howitzer off at the game, it didn’t bother him. He’s unflappable.”

Players who perform best in practice earn the honor of being that week’s “Hudson Handler” or the player who will walk Hudson through the team’s Monarch March into the stadium. For his first game — ODU’s upset win over Virginia Tech — cornerback Tobias Harris won the honor.

“I was a little nervous because I was like, ‘There’s going to be a band and a drum section and tubas.’ That would freak my dogs out,” Rahne said.

But Hudson handled it in stride. Along the way, he has become a local celebrity, and his renown is only growing. He earned significant screen time during Old Dominion’s opener, which paid off for him on social media.

Naoma Doriguzzi is a local photographer and social media consultant who works with Mutts with a Mission and figured out early she didn’t have a good answer when players would corner her and ask where the photos she took with them and Hudson would end up. And she figured her own followers wouldn’t be interested in non-stop Old Dominion football content.

I came prepared, watching out for the rain in my tent 🏈🐾#odu #ecu #football pic.twitter.com/nBskGS9Y2W

He added more than 1,000 followers during the game, and he gave fans a place to follow his day-to-day exploits.

“We started it before the season, and we’d go out to practices, but it’s blown up. At the first game, people kept coming by and being like, ‘Is that Hudson? Is that Hudson!’” Doriguzzi said.

Hudson took his first road trip this weekend to ODU’s game at East Carolina and plans to be on the sidelines for Saturday’s game at Virginia. As for Hudson’s signature attire that attracted him the most attention, at least half of it was borne out of necessity.

Turf, especially early in the season and during preseason camp, can get just as hot as asphalt. So many service dogs, against their will, wear shoes.

“We’ve been doing this a long time, and our dogs have gone through every boot imaginable,” said Corson, who founded Mutts with a Mission in 2009. “Our dogs will keep them on, but they’ve never been happy with them and will flip them off or something like that.”

One of their team members found a pair of dog Crocs on the internet and texted that to Corson along with a joke that the dogs could match her since she frequently wore Crocs as well. They bought a couple of pairs out of curiosity and struck gold.

“The dogs love ’em. We’ve had dogs who object to boots, and they’ll wear them,” Corson said. “I’m guessing it’s the material.”

Many of the dogs Corson trains will have to walk long distances on pavement or on battleships in Virginia Beach and require some kind of protection to protect from burns. Now, that’s easier. And in Hudson’s case, that made him stand out more.

His goggles are specially made sunglasses for dogs from a company in Wyoming called RexSpecs. Players, however, just say Lil’ Huddy is rocking his own Pit Vipers. They check in at $84.95 each.

Corson and Rahne are hoping to make Hudson the first in a line of Mutts with a Mission dogs that embrace ODU’s program. They’ve already seen copycats. Virginia adopted “Champ” and the two will meet at this weekend’s game in Charlottesville.

“The smiles he puts on players’ faces, that’s all I was ever hoping for,” Rahne said. “Everywhere we go, people ask me about him and Mutts with a Mission. It’s blossomed into something awesome.”

Eventually, Hudson’s time in training will end. Whether he passes the torch to another puppy or retains his duties is a question to be answered another day. But Corson and Rahne are hoping the same thing for his forever home.

“It’s already sad to me he can only be with us for two years, and I really hope in two years, he goes to an ODU fan or someone who can keep him in our lives,” Rahne said.

(Top photo: Courtesy of Naoma Doriguzzi / Mutts with a Mission)