Late spots of rain transformed the critical final timed practice ahead of qualifying into a tense shootout in the latter stages as the field made their bids to grab direct spots into the Q2 session later this afternoon.

Having taken over top spot early on with a 1m59.167s on the combined order to lift himself up from 11th, Bagnaia found himself on the cusp of the top 10 as the final moments of FP3 got underway.

Thick, grey clouds hovering above the Sepang International Circuit led to spots of rain falling on track as Pramac rider Martin shot up to the top of the file with just under five minutes to go with a 1m58.583s.

The rain led to a frantic push for laps as the field bunched up at various points of the circuit, leading to traffic problems.

Bagnaia was left furious when he came across a touring factory Yamaha of Franco Morbidelli going through Turn 5, which forced the Ducati rider to check up and Marc Marquez behind to abort his lap and narrowly avoid contact with the championship leader.

With just under two minutes of the 45-minute session remaining, Bagnaia found himself latched onto the back of chief title rival Fabio Quartararo as they both lit up the timing screen.

But Bagnaia would crash going through Turn 8 trying to keep up with the Yamaha rider, which quite quicky put the Italian into a danger zone as a number of improvements started to happen behind him.

Martin’s 1m58.583s would keep him top of the order and safely through to Q2, while late improvements for Suzuki’s Alex Rins and Morbidelli shuffled Bagnaia down to 11th and into Q1. 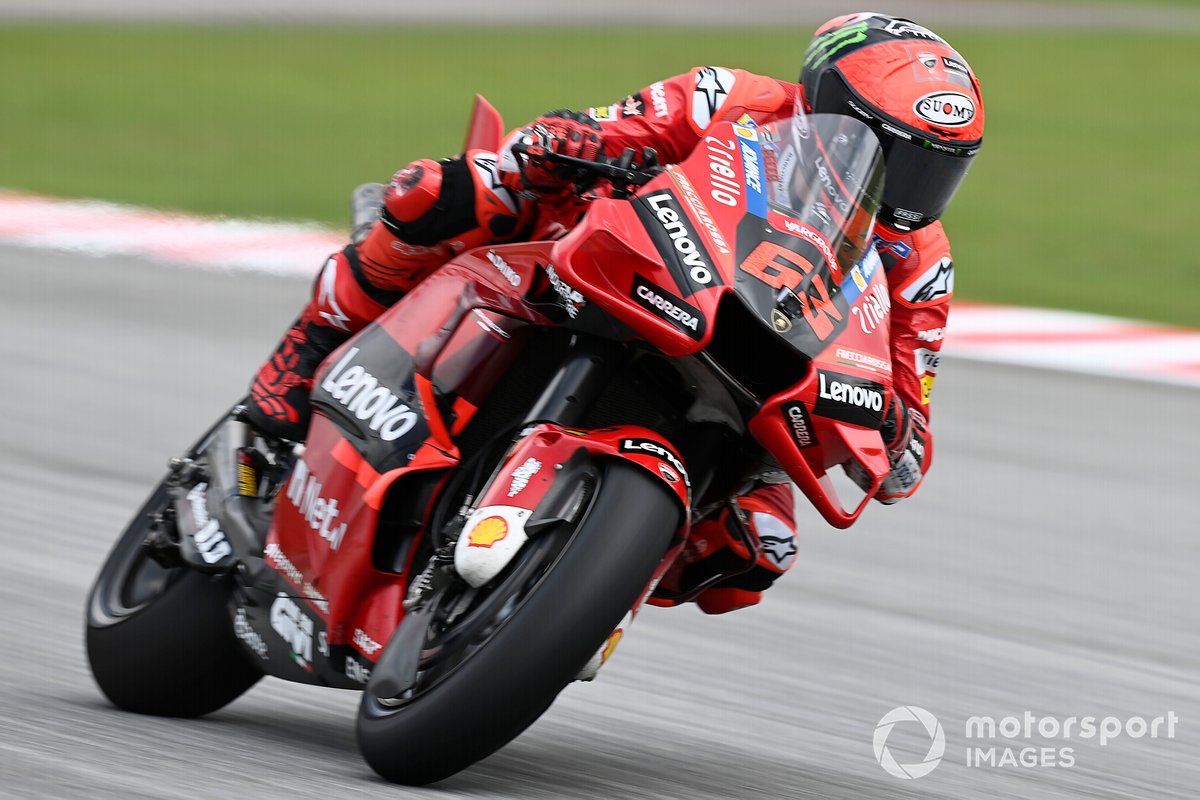 Marco Bezzecchi was second on his VR46 Ducati ahead of the Aprilia of Maverick Vinales, while Luca Marini was fourth on the sister VR46 Desmosedici.

Joan Mir safely made it through to Q2 on his Suzuki, with Gresini’s Enea Bastianini the leading championship contender in sixth ahead of Quartararo.

Rins’ late improvement pushed him up to eighth ahead of Aleix Espargaro, the Aprilia rider salvaging a tough weekend by following Martin on his final flying laps to secure a crucial Q2 place.

Morbidelli rounded out the top 10 but is currently facing an investigation for his late blocking of Bagnaia and Marquez, with race direction likely to be harsh on the Italian after he got in teammate Quartararo’s way earlier in the session.

Bagnaia’s crash proved massively costly as he was denied a place in Q2 by nothing having set an identical 1m59.167s to Morbidelli – though the Yamaha rider stole the march by virtue of his following lap being quicker than the Ducati runner’s.

The championship leader will join a volatile Q1 session later today that will include Marc Marquez, who was 16th at the end of FP3, Pramac’s Johann Zarco, Friday pacesetter Brad Binder (KTM) and Bagnaia’s teammate Jack Miller.

The worsening conditions at the end of FP3 led to several riders crashing, with LCR Honda’s Alex Marquez and RNF Racing’s Cal Crutchlow left in 17th and 19th as a result of separate spills.

Honda’s Pol Espargaro crashed twice in FP3 and was 21st as a result, with Gresini and Tech 3 rookies Fabio Di Giannantonio, Raul Fernandez and Remy Gardner also falling from their motorcycles during the session.