Marquez “having a hard time” with Honda MotoGP bike in Malaysia

The six-time premier class world champion scored his first podium of the season last time out at the Australian Grand Prix after narrowly missing out on victory.

Marquez urged caution on the result, however, as he noted Phillip Island’s fast and flowing nature – combined with its anticlockwise layout – masked the main issues of the 2022 RC213V.

The Honda rider ended Friday’s mixed running at Sepang third overall, but says this is not where he should be in reality as he is struggling with a bike that “feels very heavy”.

“I don’t know how, but the bike feels very heavy,” Marquez said. “You have to understand why I notice that inertia: on circuits where you flow, like Phillip Island, it’s less noticeable.

“But here we suffer more. My position is the same as always, but the character of this year’s bike is worse for my riding style.

“But it is the one we chose because for this year it was better. I’m third, but it’s not a real position; I’m having a hard time. I’m third because we’re pulling from experience.”

Marquez’s Honda teammate Pol Espargaro was handed a three-place grid penalty for Sunday’s race after he was deemed to have re-joined the circuit in an unsafe manner during FP1.

Espargaro ran off track going through Turn 8 in the early stages of FP1 and almost came into contact with Pramac’s Johann Zarco as he re-joined, netting him a penalty. 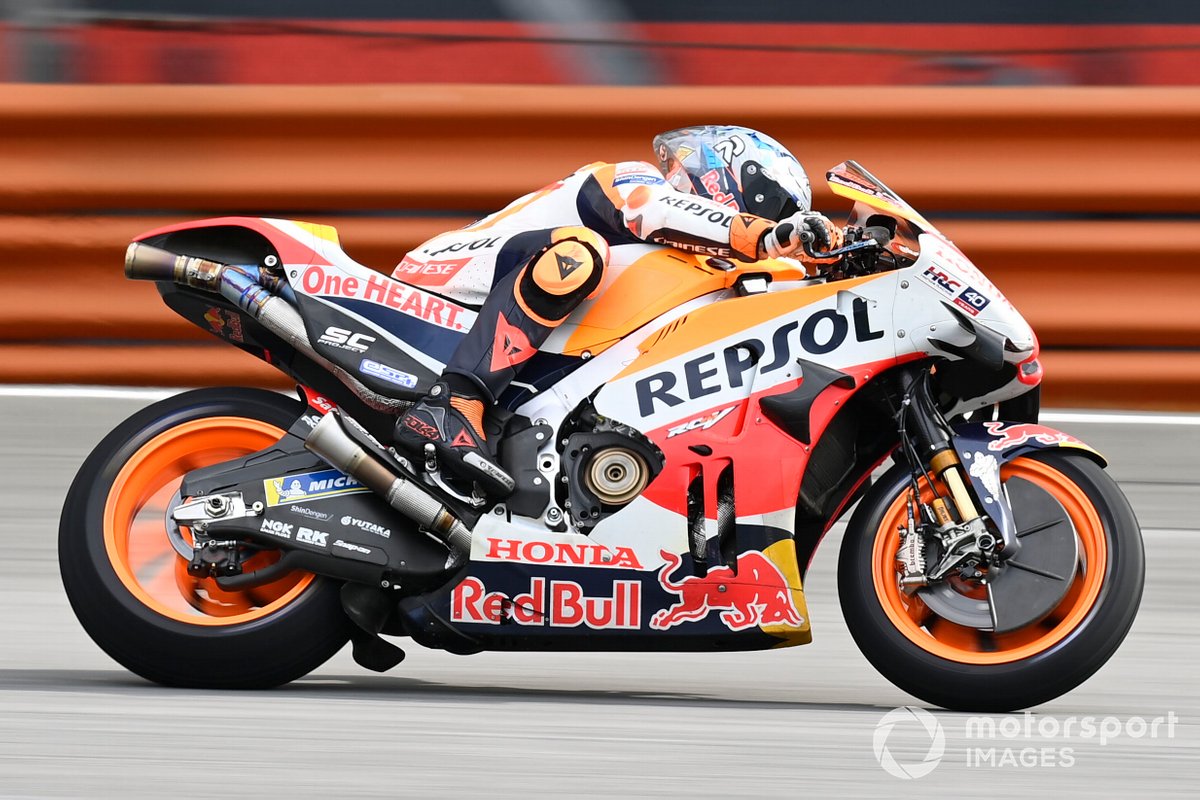 While Espargaro admits that his actions were “not nice”, but believes there were mitigating circumstances that race direction should have considered before judging whether or not to penalise him.

“I’m pretty angry,” Espargaro said of the penalty. “If you see the image, for sure you can understand the penalty. But there are things going on, why I just go in the track so fast because the crash is coming.

“In that place it should be a green [painted] area, close to the kerb until the end of the kerb to re-join to the track slowly.

“It’s like that at the other tracks in the world, but there is grass completely at one point.

“I needed to avoid the grass and go on the track, that’s why I meet with Johann. Apart from that it was in the first lap of FP1, everyone was figuring out how to ride this place.

“Plus, the lap was cancelled for both of us because of the yellow flag [for Marco Bezzecchi’s crash].

“If you consider it all, I’m the first one to say it was not nice. We shouldn’t do these kind of things, but you need to understand the full image of the story.

“It’s the same as always, you explain to them [race direction] the good thing [to do] would be… ‘okay, we will try to go to this place to see if what you’re saying is true, if the green area is finishing in one moment’.

“They would understand and wouldn’t penalise me, but they don’t do that, they don’t hear anything and I get penalised on lap two of FP1 three positions.”