Wataru Endo scored his second goal this term as Stuttgart thumped Bochum 4-1 at home for their first win of the season, while Celtic’s Daizen Maeda scored his season’s first in Scotland. Ayase Ueda struck his third for Cercle Brugge in Belgium where former Borussia Dortmund star Shinji Kagawa also scored for Sint-Truiden.

Kamada struck a 45th-minute penalty before Leverkusen leveled through Piero Hincapie’s 56th-minute header, but Randal Kolo Muani’s header and a chipped finish from Jesper Lindstrom made it 3-1 for the hosts.

Kamada’s through ball then led to Hincapie fouling inside the box and getting sent off for a second yellow card, with the Japanese playmaker scoring his second from the spot in the 72nd minute. Lucas Alario completed the rout four minutes from time. 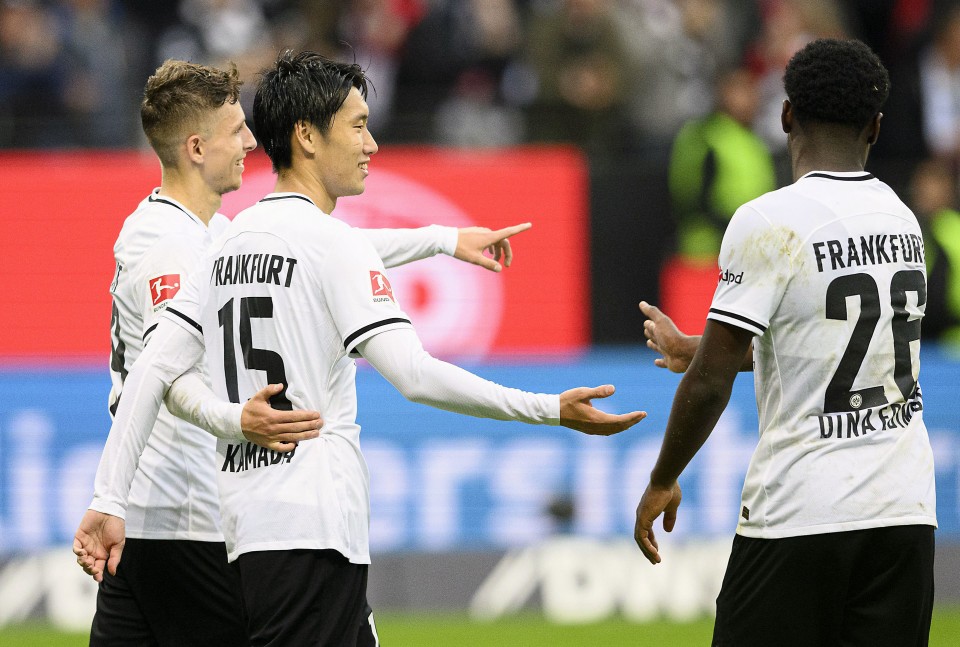 Daichi Kamada (C) of Eintracht Frankfurt celebrates after scoring his second penalty in the second half of a German Bundesliga match against Bayer Leverkusen in Frankfurt, Germany, on Oct. 15, 2022. (Kyodo)

Endo buried a loose ball for Stuttgart’s fourth in the 71st minute against Bochum before fellow Japan international Hiroki Ito came off the bench to play the last 15 minutes of the match.

The victory snapped Stuttgart’s nine-game winless start to the Bundesliga season that prompted the sacking of manager Pellegrino Matarazzo earlier in the week.

“I’ve been thinking the players were responsible too,” Endo said. “I hope (this win) serves as a catalyst.”

Celtic bounced back from their Champions League exit in midweek with a 6-1 hammering of Hibernian at home. James Forrest had a hat-trick and Georgios Giakoumakis a brace before Maeda scored off the post in the 89th minute from Aaron Mooy’s cross.

Ueda tapped in from close range to make it 3-0 for Cercle Brugge en route to their 5-1 home win over Eupen, while Kagawa scored the 12th-minute opener straight from a corner, his second goal this term, as Sint-Truiden went on to win 2-1 against Charleroi at home.

Mizuki Arai scored his first goal for Gil Vicente as they won 3-0 away to Serpa in the third round of the Portuguese Cup.