Interview: Evgeny Bobryshev on not being able to race in 2022 due to the FIM banning Russian riders 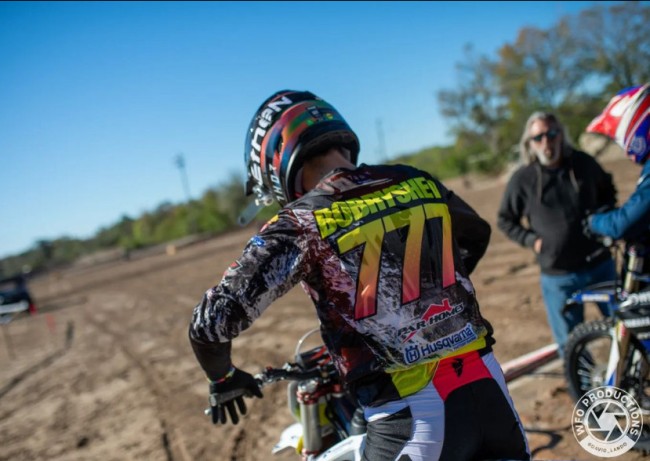 It’s been a tough year for Evgeny Bobryshev as well as the Russian Motocross riders as they haven’t been able to race professionally. After the Ukraine invasion, the FIM decided to ban Russian riders from racing which has been very tough for them.

Bobryshev was a recent spectator at the WSX event in Cardiff so we caught up with him to discuss his difficult year, potential plans for the future and more.

GateDrop: Bobby, we are here at WSX, first of all it’s great just to see you, unfortunately we haven’t seen you in a while! We are here at WSX, being a fan of the sport how great is it to see Supercross here in the UK?

Bobryshev: Yeah, you know it is one of the biggest events of the year to happen right now so I couldn’t miss it. I have a strange feeling to be here because looking at everything that is happening and people here getting ready for racing. I have a weird feeling inside my body because I want to be part of that. I have to just watch and enjoy the weekend.

GateDrop: You’ve been to some AMA Supercross races, walking into this stadium and seeing the track here in Cardiff, how does it compare?

Bobryshev: Yeah, it is completely different there in the US. This track looks way easier I would say than in the US. But I think it is good, it is WSX so it’s good for the level of riders racing here. If they build a proper American Supercross track then it would be completely different because the whoops over there, they’re two metres high. It is massive, here they are alright – I think I could go myself with my outdoor suspension through them (laughs).

GateDrop: Seeing Ken Roczen and Eli Tomac racing a Supercross track here in Wales, I think that is really good for the sport – it should help the sport grow outside America.

Bobryshev: Yeah, those big names coming over, you don’t see them often in Europe because they have such a busy schedule over there in the US. Now they are here it is good to see it live. It will be nice to reach out to the boys, I have known Kenny since he stepped up to race the first GP in Portugal when he was 16 years old. Since that time, I have known him and it is good to see him over here. Tomac also, you don’t see him often coming here and there’s many other good riders here, so it is interesting races to watch.

GateDrop: Just on you, a lot has been happening in the world this year and the sad state of affairs between Russia and Ukraine means you haven’t been able to race. What exactly have you been doing with yourself?

Bobryshev: It is frustrating to see what is happening in the world, definitely. Not many people know this but I have lived in the Netherlands since I was seventeen, so I have everything setup there. My kids were born there, and my family have a Dutch passport, I have a resident card and my side business is there also. 99% I am there in the Netherlands. Since March when they announced that Russian athletes can’t participate the Russian races, to be honest I was looking everywhere to see where I could race. I called many countries but unfortunately all of them, all the federations are affiliated with the FIM.

I was depressed to be honest because I went to the US to get ready for the AMA outdoors and I had goals for the British Championship. I was so concentrated for this year and so motivated and pumped. When they stopped me from racing and when you love the sport, you put your heart into Motocross and somebody tells you that you can’t ride. It’s not my fault what is happening and why we have to be mixing with political situation there. We don’t have the power to make the change, you know? 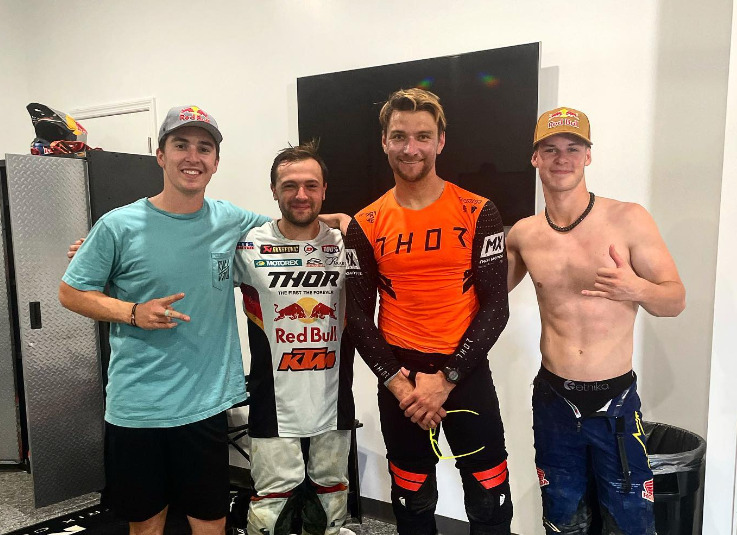 GateDrop: Have you stayed in the Netherlands most of the time and have you been doing much riding?

Bobryshev: I stayed mostly in the Netherlands and put more time into the family. At the same time, I was trying to find away to race. I put my bike to the side, I did go riding a few times in March and then I travelled back to Russia in August to visit my Mum and Father for a couple of weeks. I got my dog from there as well because we left the dog there. I organised a school there, I had a group of kids that I was teaching Motocross for a day and enjoyed that. Most of the time I’ve been in the Netherlands and then I was in England to do some riding and testing. But not much to be honest, not much.

GateDrop: You have seen a little bit what your life will be like without Motocross but that probably makes you motivated to come back and race a few years! Have you heard anything yet if you will be able to race in 2023 or not?

Bobryshev: No, at the moment it is still quiet. I saw a few days ago there was news that the boxing association, they allowed Russian fighters to fight worldwide. Also, tennis and hockey players, they can play. I hope that the FIM can look at the situation, nothing is changing so why they have to be affected by that? I hope they allow us to ride for next year.

GateDrop: Are you still motivated to come back and race then or has this situation annoyed you that you wouldn’t want to come back? I am sure being away from racing for a year you miss it…

Bobryshev: Yeah, definitely. I really have to try and find away, I hope the FIM can look at the situation and allow Russian athletes to race because this is what I live for. I love the sport badly and then next year, I will do AMA outdoors definitely if I am allowed. 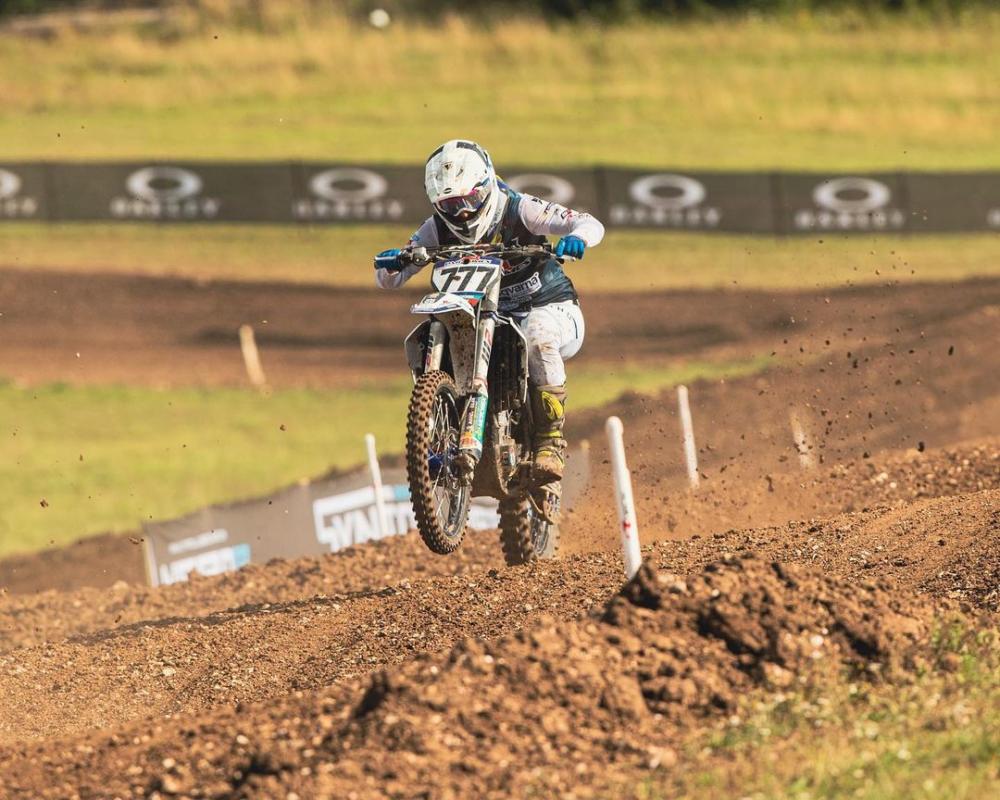 GateDrop: You plan on doing the full AMA National championship?

Bobryshev: Around nine or ten rounds I will do and then the British so I have to find away. Also, I have applied for a Dutch passport, but the problem is, it is taking a bit longer as they are really busy the government. I explained the situation to them, but it is difficult.  I also spoke with an FIM representative, and he also said the situation is difficult but somehow that it’s not under their control. They will have a meeting in December and I hope they can sort it out.

Bobryshev: Yeah, I did look into racing there. I also looked in South Africa, Brazil and many countries. They all had FIM affiliations, but the big hope was Canada. They told me the first time that I could race because they weren’t affiliated with the FIM. So, I made a deal with GasGas to race over there and everything. A few weeks later the FIM sent them a mail warning them that if they let Bobryshev race that they would get a sanction from the federation. They contacted me and said they were really sorry, but they didn’t want to have a problem with the FIM.

I was feeling fired up inside about how it was possible. You know me, even if I change my passport or something, my personality stays the same, it is just paperwork at the end of the day. They just say Russians can’t ride and they aren’t looking at the individual situation. Many people are the same as me, most of their life in Europe paying taxes etc. But they don’t care because I hold a Russian passport and that’s it, you can’t race!

GateDrop: You want to race the AMA Nationals next year; we saw Josh Gilbert do them and was comfortably top fifteen this year and pushed for top ten. Does that motivate you to have a good winter knowing you could battle for top ten in the AMA Nationals?

Bobryshev: I’m not thinking about where I can be, I do have some ideas. This year I was supposed to do AMA also but I couldn’t do it but it motivates me just to go and race there. It will be something different and fun. With everything happening I had so much support from the US people saying it was ridiculous and that it was possible for them to stop me racing. I love the country, my family like it, it’s big and the weather is warm. I would like to go over there, meet new people, try different tracks and race. I like the tracks they have over there.

GateDrop: Just on the MXGP World Championship, last year was unreal with a three-rider title but this year Gajser ran away with the title!

Bobryshev: Yeah, I mean this year was boring. It was alright but compared to last year when we had Herlings and Febvre at a good level battling every race. For me this year was a bit boring, I put the TV on, I saw Tim was gone and I put the TV off again because second and third were far away. But I definitely followed it, I follow the sport but at the start when I couldn’t race I was upset so wasn’t interested for a while.