When the Holy Cross boys basketball team begins pre-season practice 10 days from now, Jacob Meyer will be back in action with the Indians.

Meyer, the leading scorer in Kentucky last season with a 38.2 average, planned to finish his high school career at a prep school in Atlanta. But the 6-foot-3 guard has returned to Holy Cross and is eligible to play his senior season, according to coach Casey Sorrell. 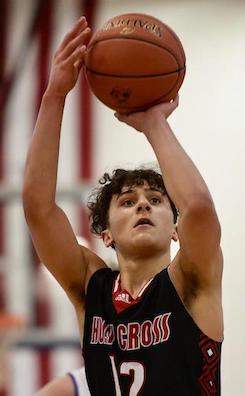 During the spring and summer, Meyer played for the Indy Heat in the Nike Elite Youth Basketball League. The team qualified for the Peach Jam national tournament where he averaged 9.5 points and 3.1 rebounds in six games.

In July, Meyer announced that he would enroll at The Skill Factory, a prep school in Atlanta that’s designed to develop elite student-athletes to reach their full potential. He made that move to raise his profile for college recruiting.

Meyer made a commitment with Western Kentucky University before his junior year, but he reopened the recruiting process last summer. He has also received Division I scholarship offers from Miami of Ohio, Bowling Green, Indiana State and James Madison.

With Meyer back in the lineup, Holy Cross will likely be ranked among the top contenders for the 9th Region championship this season. The Indians also have senior guard Javier Ward and senior center Sam Gibson returning from last year’s team that posted a 21-10 record.