Cale Makar won the Stanley Cup and earned playoff MVP honors after a season in which he was voted the NHL’s best defenseman.

He may be the best hockey player in the world, and still he looks around at Connor McDavid, Patrick Kane, Auston Matthews and Colorado teammate Nathan MacKinnon and marvels at all the talent.

Hard to argue with that. The NHL is coming off its highest-scoring season in decades and a Cup final between the Avalanche and back-to-back champion Tampa Bay Lightning that was a showcase of the best playoff hockey can deliver.

Thanks to an unprecedented level of skill and speed on the ice, business is booming going into what’s expected to be the league’s first full season on a normal schedule since before the pandemic.

McDavid, Edmonton’s captain, set career highs with 44 goals, 79 assists and 123 points and still wasn’t the MVP. That’s because Toronto’s Auston Matthews scored 60, the most in an NHL season since Alex Ovechkin’s 65 in 2007-08.

Matthews scored the most, but he certainly wasn’t alone. The total of 6.3 goals per game last season is the most since 1995-96, and with a less condensed schedule, the questions follow along the line of, “Can Matthews score 65?” and “Can Ovechkin score 50 again?”

“Every guy in this league can score goals,” Boston goalie Jeremy Swayman said. “I have the best seat in the house some nights. It’s incredible what these players can do.”

Off the ice, players are still paying back owners for losses from the pandemic under their collective-bargaining agreement, but thanks to U.S. TV deals with ESPN and Turner Sports that began last season and other business deals, the NHL has rebounded strong. Revenue hit a record of $5.2 billion last year.

That number is expected to keep rising, and one reason is the addition of advertisements to jerseys for the first time, the second of the four major North American men’s professional sports leagues to go that route after the NBA. Montreal captain Nick Suzuki said it’s “just the way things are going in this generation” — a give and take between hockey tradition and the need for revenue.

“It’s tough, but we’ve got to make some money back any way we can,” Chicago forward Max Domi said.

MacKinnon will become the highest-paid player in the league after signing a $100.8 million contract extension that kicks in a year from now. He and the Avalanche are favored by FanDuel Sportsbook and other oddsmakers to win the Cup again, which rivals see as the product of talented teammates pushing each other to be better.

“Arguably, I think they’ve got the best forward, the best defenseman and a lot of guys underneath that that are unbelievable,” Anaheim forward Trevor Zegras said. “Just the talent on that team is ridiculous.”

Zegras was responsible for the most ridiculous highlight-reel play last season, alley-ooping the puck to a teammate from behind the net for a goal. Creativity is on the rise, with stars like Matthews at the forefront of a generation of players unafraid to be themselves and stand out in a sport that has long discouraged individuality.

“As long as I’m playing well and helping the team win and we’re playing well as a team and everything, it doesn’t matter how many goals I score,” Matthews said. “Whether I score 20 goals or 100 goals, as long as those things are kind of aligning, it’s fine.”

Matthews and the Maple Leafs will again try to exorcise some playoff demons after losing six consecutive opening series, while McDavid and the Oilers will attempt to get past Colorado in the West. But that can’t start until the regular season wraps up in mid-April, back on schedule for the Stanley Cup to be awarded two months later.

But first, it’s time for 1,312 regular-season games, starting with San Jose and Nashville in Prague for the return of the NHL’s Global Series. Before going to Finland in November to face the Blue Jackets, the Avalanche will raise the third championship banner in franchise history in their season opener and begin the hunt to keep the Stanley Cup in Denver.

“Nothing really changes,” MacKinnon said. “It’s going to be a long season, obviously, before the playoffs, but it’s fun to have that experience now and the confidence to do it again.” 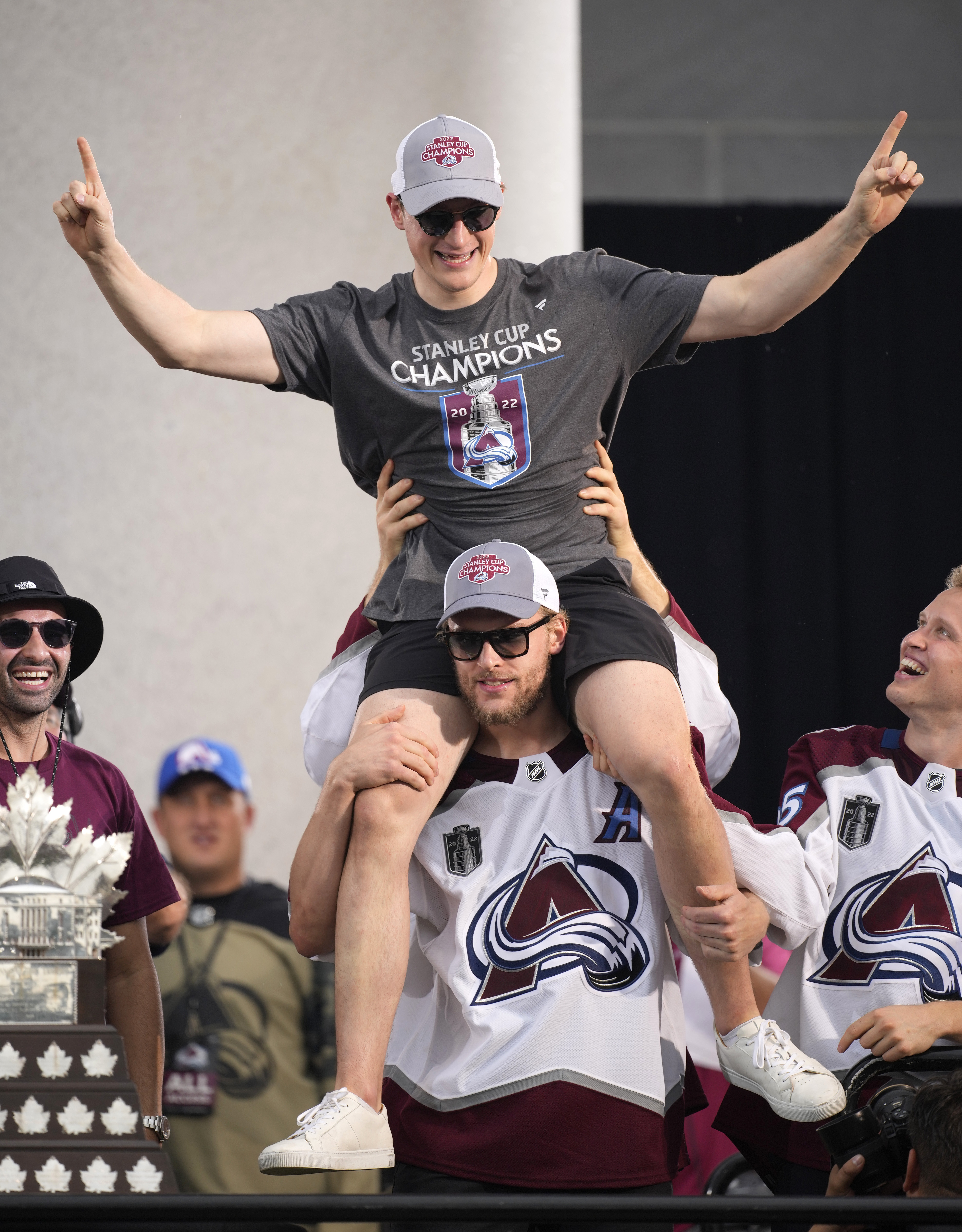 FILE -Colorado Avalanche right wing Mikko Rantanen, center bottom, lifts defenseman Cale Makar, center top, during a rally outside the City/County Building for the NHL hockey champions after a parade through the streets of downtown Denver, Thursday, June 30, 2022. Looking on are center Nazem Kadri, left, and right wing Logan O’Connor. All the Stanley Cup parties and parades are over for the Colorado Avalanche. The shorter-than-most summer has run its fun-loving, Cup-hoisting course and training camp has arrived. It’s time to get back to the task of defending the title. (AP Photo/David Zalubowski, File) 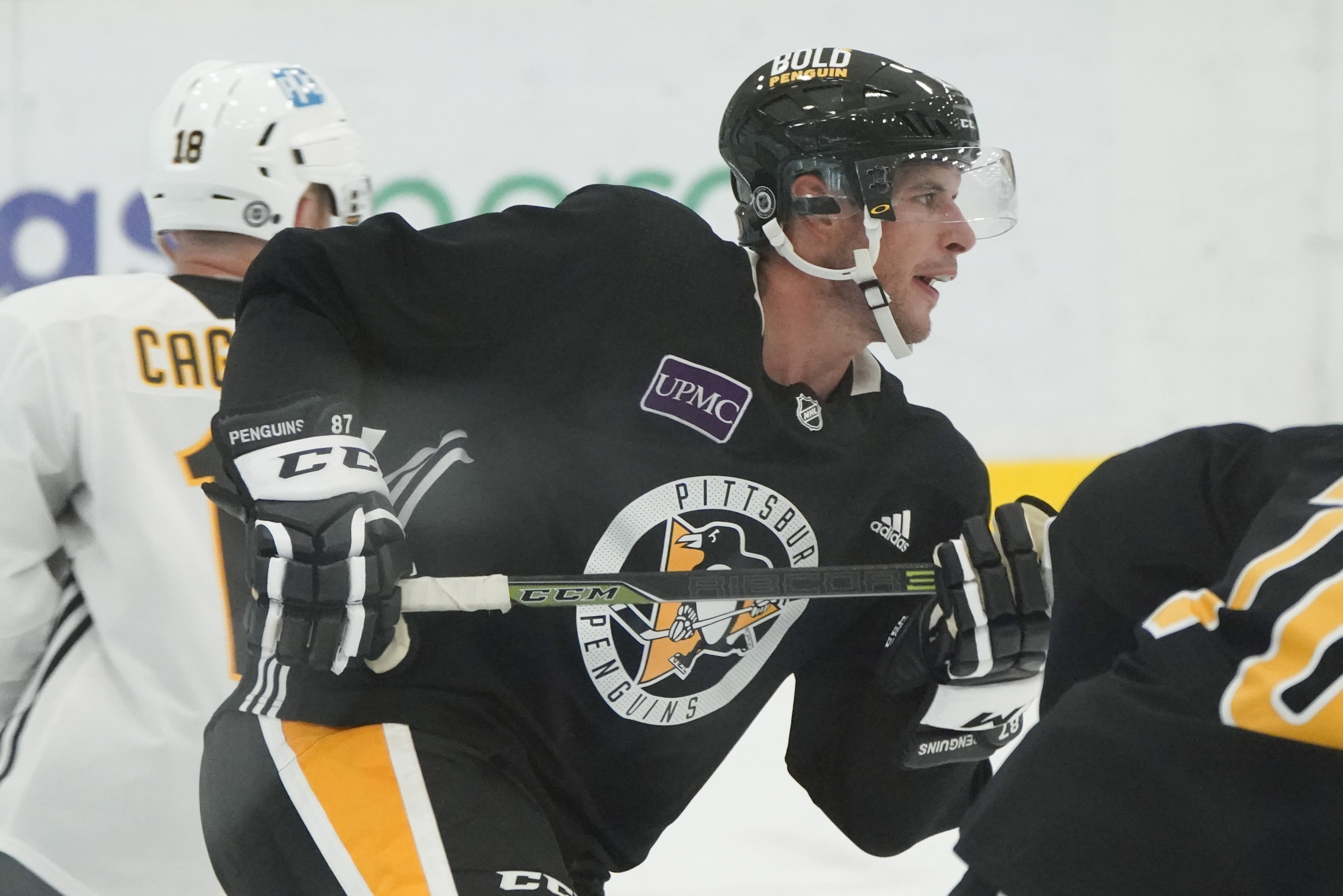 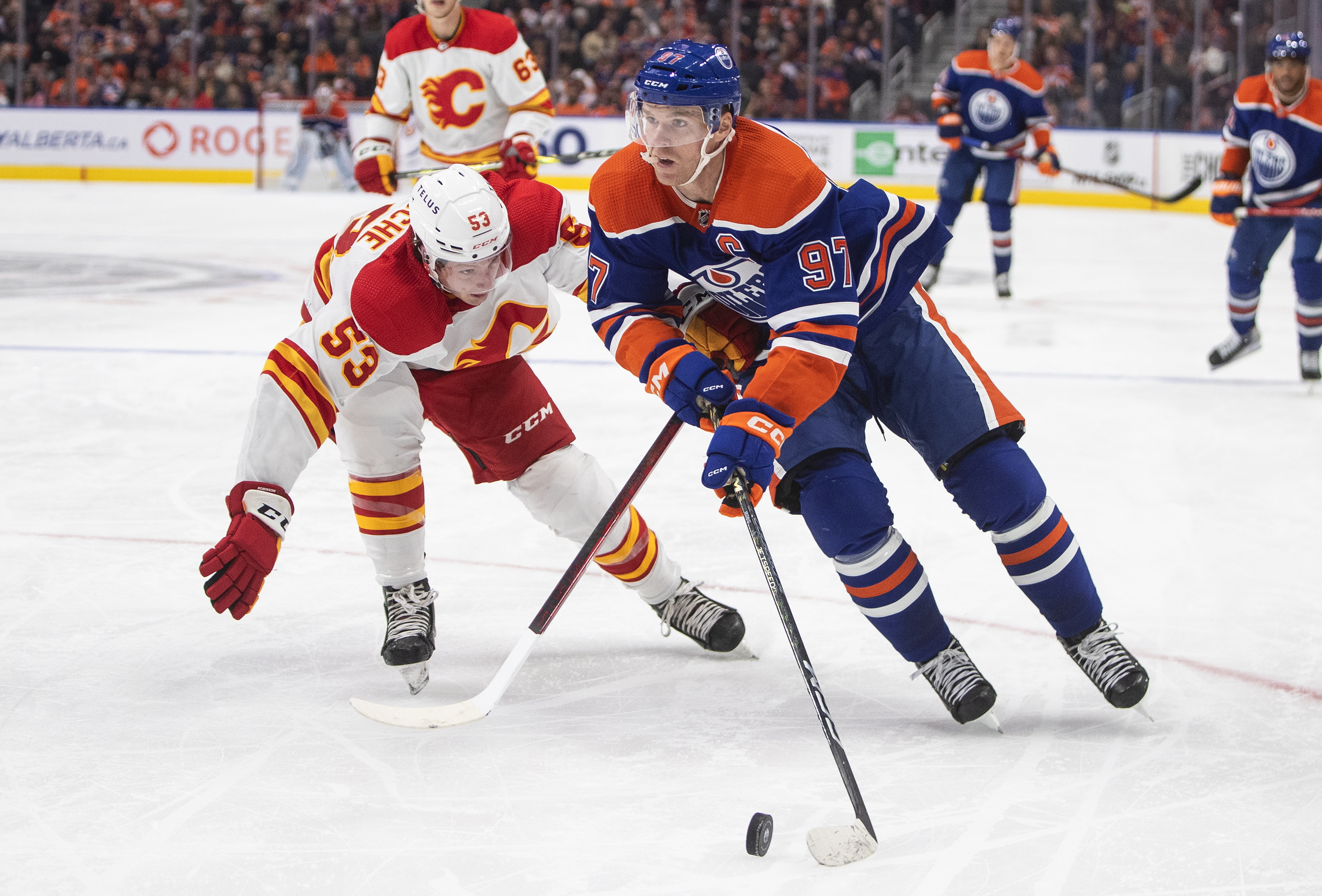 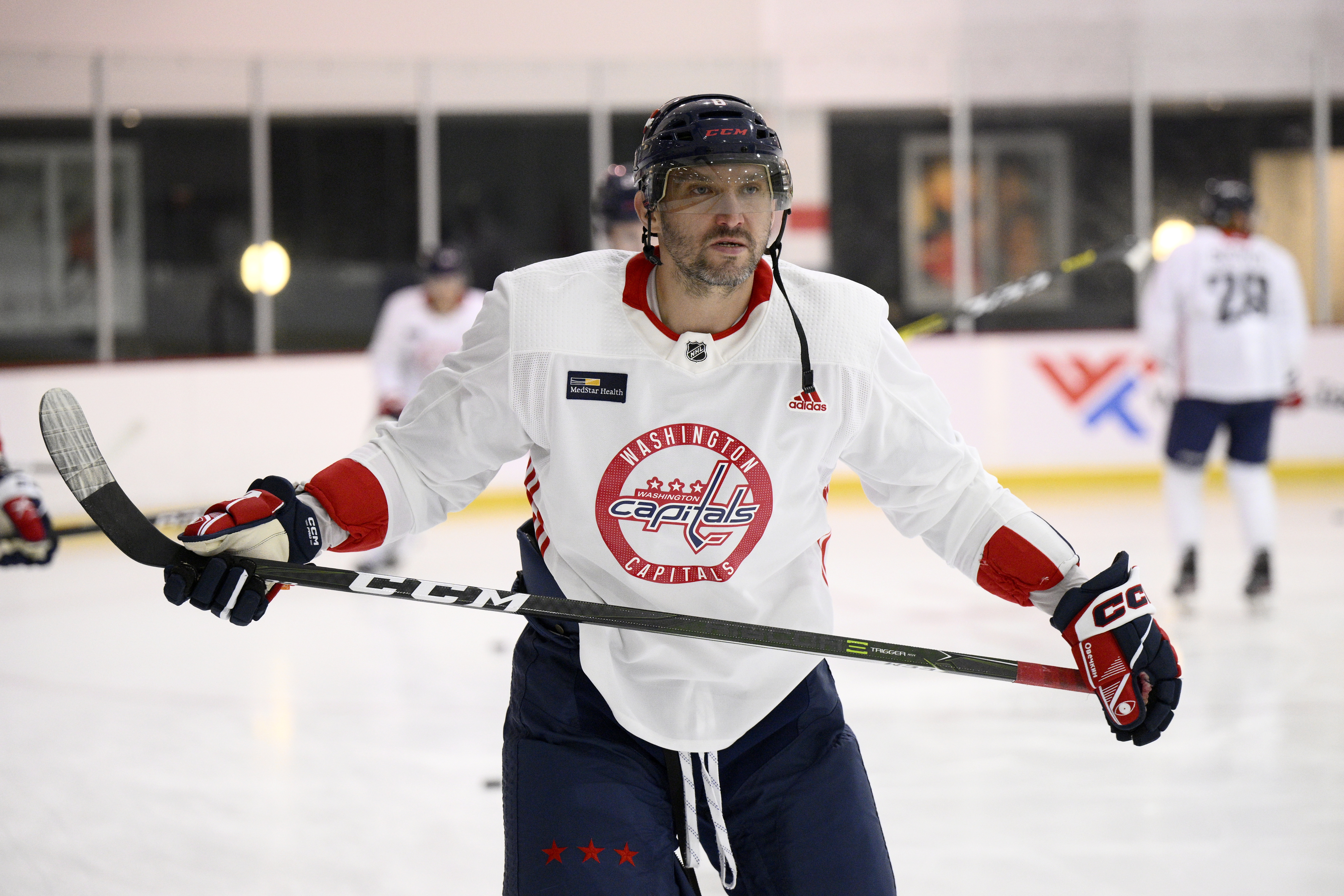 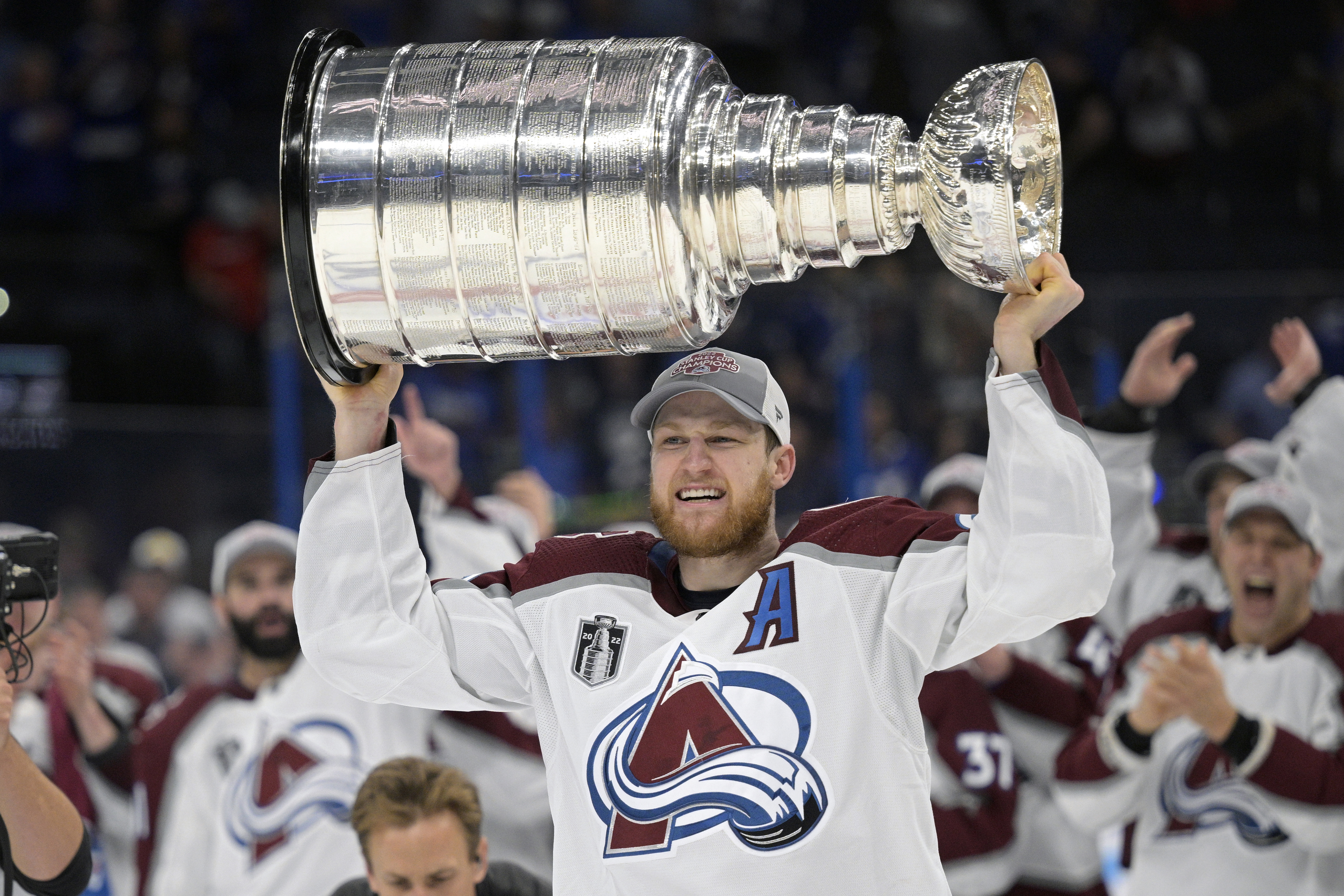 FILE – Colorado Avalanche center Nathan MacKinnon lifts the Stanley Cup after the team defeated the Tampa Bay Lightning in Game 6 of the NHL hockey Stanley Cup Finals on Sunday, June 26, 2022, in Tampa, Fla. The Colorado Avalanche are making Nathan MacKinnon the highest-paid player in the NHL’s salary cap era. MacKinnon, who just turned 27 earlier this month, signed an eight-year contract that is worth $100.8 million, according to a person with knowledge of the situation. The person spoke to The Associated Press on condition of anonymity Tuesday, Sept. 20, 2022, because the team did not announce terms of the contract. (AP Photo/Phelan M. Ebenhack, File)