After an offseason that saw a lot of roster turnover and the integration of many fresh faces into its lineup, Harvard women’s ice hockey was challenged early in a four-game homestand to open its 2022-23 season. It faced the monumental task of developing team chemistry while simultaneously winning games against quality opponents. Ultimately, the first four games of the season underlined just how much work the Crimson still has to do, as it managed just one victory – a shutout of Dartmouth – while suffering three setbacks, at the hands of Quinnipiac, Yale, and Brown.

Brown started the contest with a one-player advantage, as first-year Indi Wagner was called for a delay of game penalty. Halfway through the power play, Brown broke through the Harvard defense. After taking a pass from junior defender Cassidy Piersiak in the neutral zone, sophomore forward Olivia Williamson skated up the ice and fired a shot into the top left corner of the net to give the Bears the lead.

Six minutes later, the Crimson got a chance to respond, as Brown senior defender Maddie Stockfish was called for a two-minute tripping penalty. Despite not converting on the power play, Harvard found its equalizer a minute later off of a shot from sophomore forward Paige Lester. Lester took the pass from senior forward Kristen Della Rovere and laced a shot into the back of the net as she fell to the ice.

Despite multiple power play opportunities for both teams across the second and third periods, neither team could muster another goal as the game went to a decisive overtime period.

In the overtime period, Brown sealed the victory after converting on a power play chance initiated by a slashing call on Della Rovere.

With a 45-32 shot advantage, the contest marked the first time so far this season that the Crimson has outshot its opponent.

Seeking to build upon the momentum from its first win of the season, Harvard played host to No. 9/8 Yale (1-0-0, 1-0-0) on Friday in the second-to-last game of its opening four-game homestand. This was the first matchup between the two teams after splitting the season series last year.

Following a third period that went down to the last second, it was the Bulldogs who escaped with a 2-1 victory over the Crimson. Yale rode the hot hand of first-year forward Jordan Ray, who scored her first two career goals in the contest.

Although the game was high-octane and filled with emotions, Harvard still has a long season with many important games before it.

After withstanding an early Crimson offensive to begin the first period, the Bulldogs dominated possession and kept the pressure on the Harvard defense. The Crimson defense stood strong by recording three saves and three blocked shots.

Six minutes into the first period, Harvard had a chance to strike first, as junior forward Shannon Hollands got free on a breakaway. However, the Crimson faithful had to wait to cheer as the sound of the puck hitting the pipe echoed throughout the arena.

Harvard mounted its next offensive at the ten-minute mark, which was sparked by an outlet pass from Della Rovere to senior forward Anne Bloomer. By winning multiple faceoffs and recording more shots on goal, the Crimson kept the pressure on the Yale defense, but its best chance came off a blocked shot from sophomore defender Mia Biotti. After Biotti’s shot ricocheted off a defender in front of the goal, sophomore forward Hannah Chorske and Bloomer each tried to inch the puck past the goaltender.

But after the offensive flurry resulted in nothing, Harvard’s defense surrendered the first goal of the matchup and the Bulldogs jumped out to a 1-0 lead. The goal came following a miss from Yale junior forward Elle Hartje. Hartje’s shot from the right side of the goal drifted wide left, but Ray was there to quickly tap in the puck before Pellicci could recover. 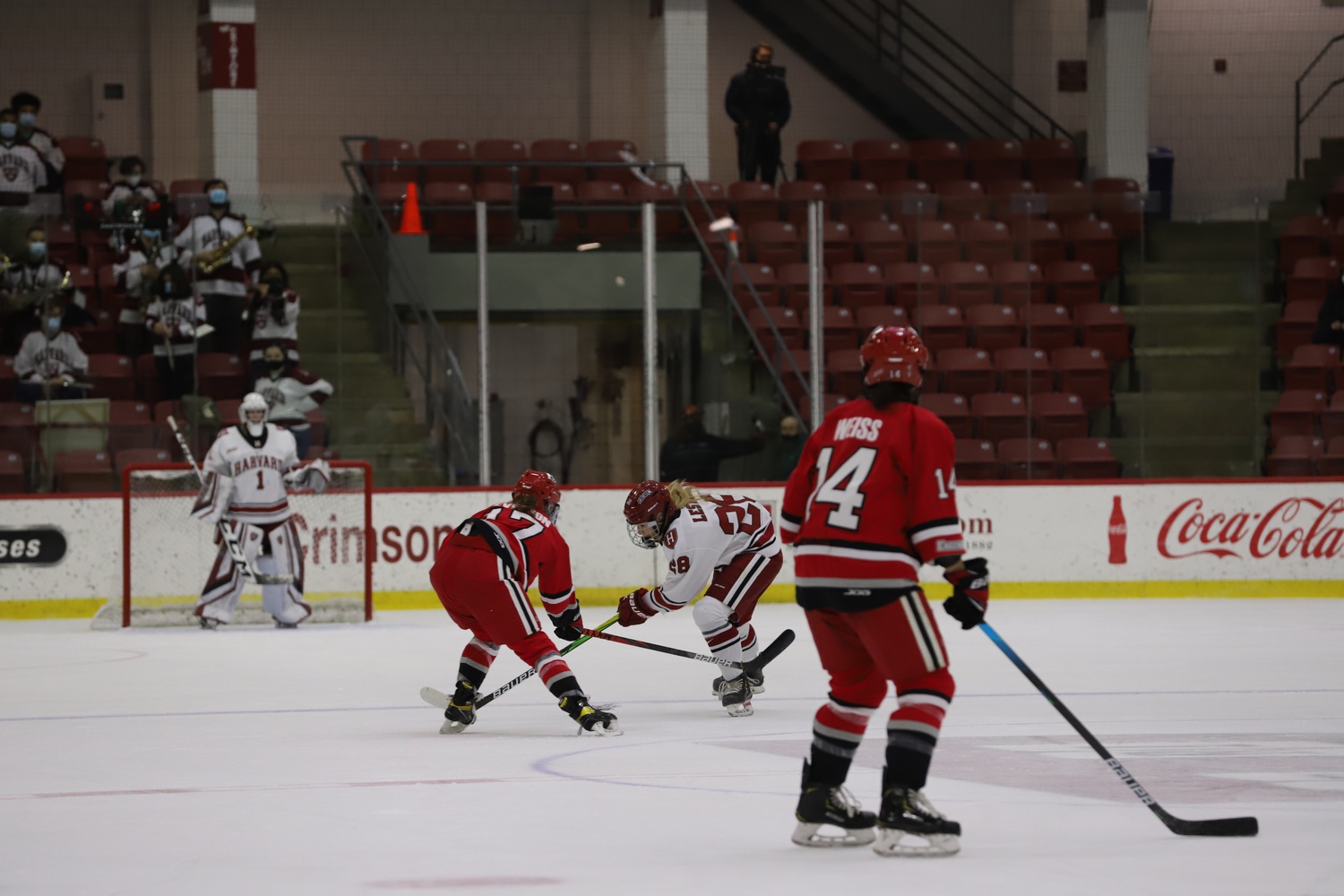 Sophomore goalie Alex Pellicci (1) waits in goal during a 4-3 overtime victory over RPI on Dec. 4, 2021. In Friday’s loss to Yale, Pellicci made 53 saves, the third-most in school history. By Angela Dela Cruz

The Bulldogs kept the puck in the Crimson’s defensive third after scoring. The Harvard defense, anchored by Pellicci’s multiple saves, stayed strong. With four minutes left in the first period, the goaltender took a scary hit while covering up the puck. However, she quickly shook off the hit and stayed in the game.

“I wanted to give [the team] confidence that we could come back and win,” Pellicci said.

In response, the Crimson took control of possession and spent the final minute of the first period peppering shots on goal.

Early into the second period, Harvard had a chance to even the score off a shot from sophomore Ellie Bayard, but Yale goalie Pia Dukaric made the glove save at full extension.

The Crimson went on the power play after a tripping call eight minutes into the second period. Despite generating a few quality shots on goal, Harvard was unable to capitalize on the advantage. The Crimson moved to 0-2 on power plays in the period after the Bulldogs killed off another advantage caused by a cross-checking penalty.

Yale appeared destined to expand its lead to two goals following a line change late in the second period. A perfect outlet pass that snuck past the Harvard defense was waiting for Bulldogs senior forward Charlotte Welch as she emerged from the bench. However, Welch was unable to light the lamp, due to a brilliant save made by Pellicci. The save was just one of many in the period, as Pellicci sought to keep the Crimson in the game after the early goal.

“I try not to let things get in my head,” said Pellicci about the first-period goal.

With only one goal separating the teams, the action grew more intense in the third period. The Bulldogs went on the power play following a tripping call on senior defender Kyra Willoughby early in the period. By generating offense of its own and sending a few shorthanded shots on goal, Harvard killed the powerplay. The same story played out the second time Yale went on the power play. The Crimson ended up firing three shots on goal during the power play. Harvard was even able to draw an advantage of its own when the Bulldogs were called for hooking while defending a shot from Hollands. Yale ended up killing off the majority of the penalty by pinning the puck against the boards.

Shortly after the Crimson killed off its third penalty of the period, the Bulldogs found the back of the net for their second goal of the night. It was once again Ray who was the hero for Yale. After picking up the puck in the defensive end, the first-year carved up the Harvard defense and scored unassisted.

The Crimson continued to fight in search of some late-game heroics. Harvard’s comeback bid started following an incredible two-way effort from sophomore forward Gabi Davidson Adams. Davidson Adams deflected a shot from Ray toward Lester. Then, she took Lester’s pass and guided it into the net past Dukaric to slice the deficit in half. With a little over two minutes left in the game, the Crimson got another break as the Bulldogs were called for a minor penalty.

Della Rovere kicked off the power play by winning a faceoff and controlling the puck. The faceoff win was just one of many throughout the game for Harvard as the Crimson won the faceoff battle down the stretch to stay in the game and keep pressure on the Yale defense. 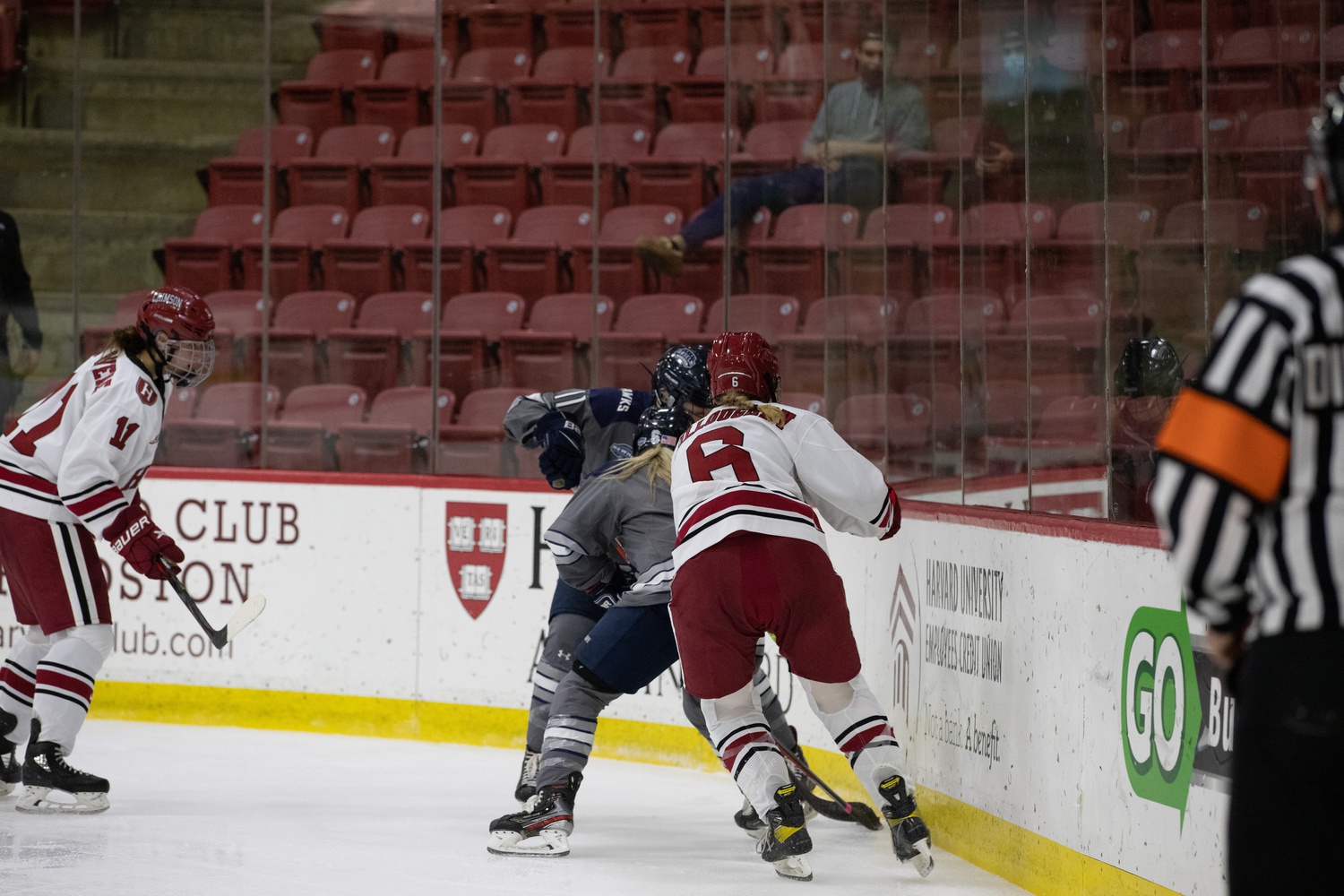 Senior defender Kyra Willoughby battles against the boards in a 6-2 victory over St. Anselm on Oct. 19, 2021. During Saturday’s loss to Brown, Willoughby celebrated her 100th career game for Harvard. By Angela Dela Cruz

Despite firing five shots on goal and pulling Pellicci in favor of an extra skater, Harvard could not crack the Bulldogs’ stout defense. The Crimson was given one last chance to tie up the game as Yale was called for yet another minor penalty with five seconds left. As the crowd of 433 sat on the edge of their seat, the final five seconds ticked away and Yale held on to its one-goal lead.

After Bloomer recorded her 100th game in the previous contest against Dartmouth, it was Della Rovere’s turn to surpass the 100-game mark.

“To reach that milestone especially with the other seniors means a lot and it is a real honor,” Della Rovere said.

Fellow captain Willoughby also surpassed the mark during the 2-1 loss to Brown on Saturday.

Over the course of the game, Pellicci recorded a career-best 53 saves, which was the third-best single-game save performance in program history. The performance came on the heels of a shutout and 40-save performance in her first two starts of the season. The Prior Lake, Minn. native has dazzled to start the season despite only appearing in three games last season.

“There’s been a lot of support from the coaches and the girls on this team that have given me the confidence to play to the best of my abilities,” Pellicci said.

The Crimson came out red hot, as Della Rovere scored only 11 seconds into the match after winning the opening faceoff and receiving a pass from Bloomer. The goal was the fastest score in Harvard history and the eighth fastest in NCAA history.

In the final minute of the second period, the Crimson further expanded its lead. Goals from Bayard and Bloomer gave Harvard a three goal advantage which remained intact throughout the third period.

To open the season, Harvard welcomed No. 7/7 Quinnipiac (9-0-0, 3-0-0) to the Bright-Landry Hockey Center. Although the Crimson holds a winning record in the all-time series, it has not secured a victory versus the Bobcats at Bright-Landry since the 2014-15 season.

Harvard got on the scoreboard in the waning minutes of the first period, thanks to the Bloomer-Della Rovere connection. Bloomer took possession of the puck in the Crimson’s defensive third and flung it to find Della Rovere streaking up the left side of the boards. Then, Della Rovere beat the goalie with a nifty fake to score the goal.

Graduate forward Shay Maloney scored another goal for Quinnipiac in the final minute of the second period to extend the Bobcat lead back to three. Adzija and Bloomer traded goals in the third period as Harvard was unable to drum up a comeback.