GMT94 Yamaha Step Up to WorldSBK with Lorenzo Baldassarri 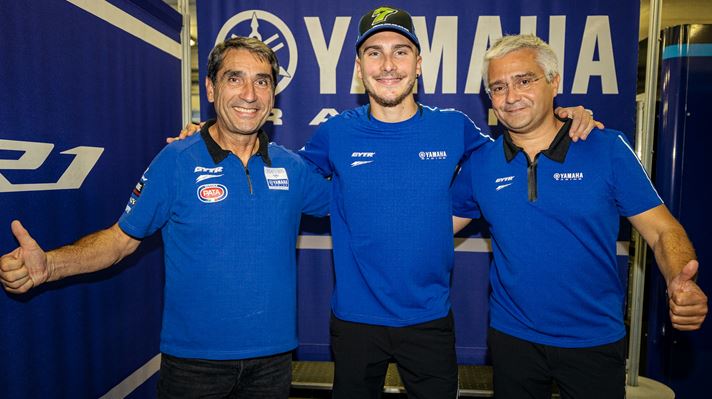 Having spent the last five seasons running the race winning Yamaha R6 in the intermediate class with Yamaha support, the GMT94 Yamaha team will now take on the premier category for the first time since 2009. Following his impressive first year in WorldSSP, Yamaha is delighted to sign Baldassarri for the 2023 season, during which he’ll race a Yamaha R1 for the French squad.

Meanwhile, GMT94 Yamaha will continue to contest the WorldSSP championship for a sixth consecutive season in 2023, with a single Yamaha R6 for French Supersport Champion Valentin Debise.

Founded in 1991, the GMT94 team has a long and successful history in motorcycle road racing, celebrating its first title in the 1998 French Superbike Championship, which was won by the team’s founder Christophe Guyot. In only their second EWC season, the team officially announced itself on the world stage, winning the 24 Hours of Oschersleben in 2000, and finishing second in the final standings.

In 2001, the team took its first of three 24 Hours of Le Mans victories, and after narrowly missing out on title success throughout its first five seasons, GMT94, now running Yamaha machinery, was crowned the 2004 EWC champions. By the time it bowed out of endurance racing in 2018, the GMT94 Yamaha team had racked up three world titles (adding 2014 and 2016-17 to its 2004 championship), 17 wins, including two Bol D’or victories, and 36 podiums.

It then embarked on the WorldSSP championship in 2018, going on to take seven victories with Jules Cluzel, as well as 24 podiums, the most recent of which came in the team’s home race at Magny-Cours this year.

Stepping up to WorldSBK with them, Baldassarri has shown incredible speed and consistency in 2022, winning four races including on his debut at Aragón, and 14 podiums. The Italian currently sits second in the standings, and with three rounds remaining is well in the hunt for the title.

Prior to this season, Baldassarri was well established inside the Grand Prix paddock. Having made his debut in the 2013 Moto3 season, his unquestionable talents earned him promotion to the Moto2 World Championship in 2014.

There, he soon became a regular top 10 finisher, and celebrated his maiden podium at the 2015 Australian round in Phillip Island. The following season he added two more rostrums to his tally, including a breakthrough victory at the San Marino GP, beating the likes of MotoGP riders Franco Morbidelli, Alex Rins, Takaaki Nakagami and Johann Zarco.

In 2018, Baldassarri took another victory, this time at the Spanish GP in Jerez, and finished fifth in the Moto2 standings. The following year, the #7 rider kicked off the season with three wins from four races, eventually ending the year seventh in the standings. ‘Balda’ left the GP paddock in 2021, entering the WorldSSP championship with his sights set on WorldSBK. 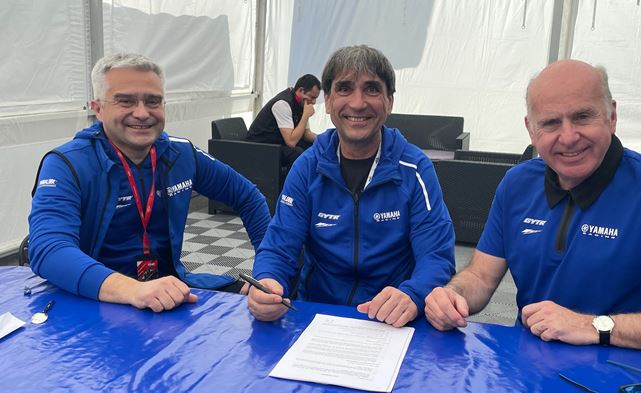 “It’s nice to see that our supported team from the WorldSSP championship is stepping up to WorldSBK. We have seen how successful this has been in the past with the GRT Yamaha team, and now we will be supporting GMT94 Yamaha in the same way. They are a team that knows what it takes to be competitive at the top level, and we expect a good performance straight away.

Yamaha wanted to offer an opportunity to the best riders in WorldSSP, and with Lorenzo we have someone who’s clearly ready to make this step. From the first race, he has impressed us and to be in the title fight in such a competitive category is an incredible achievement in itself. We look forward to having the GMT94 Yamaha WorldSBK Team and Lorenzo on the grid in 2023.”

“I’m very happy, because I started this project with Yamaha in WorldSSP from Moto2, and my goal was always to be in WorldSBK. This year, we’ve had a very good season, we have grown together and I’m always improving. I’m ready for this step into the WorldSBK championship with Yamaha and the GMT94 Yamaha WorldSBK Team, so thanks to them for giving me this opportunity; I can’t wait to start this new challenge.”

WorldSSP heads to Argentina with the title fight still on


Argentina WorldSBK – What to look out for in San Juan


#ARGWorldSBK October 21st-23rd 82 – 82 points off the Championship lead is the biggest deficit Jonathan Rea has had since joiningKawasaki.8×8 – Eight riders climbed on the podium in the more >>


Pecco Bagnaia closes in eighth place on the first day of free practices for the Australian GP at Phillip Island.


Cal Crutchlow and Darryn Binder were right in the mix on Friday at Phillip Island.The typical several seasons in one day weather welcomed teams and riders this weekend as the MotoGP World Championship returns to Australia. While the rain neve more >>


Espargaro finds his Phillip Island form with Marquez 0.250s behind

Álex Márquez made an eye-catching start as free practice for the Australian Grand Prix got underway at Phillip Island. The LCR Honda CASTROL rider went third fastest in FP1 and finished the opening day just two tenths outside the top 10 as the MotoGP clas more >>


Tetsuta Nagashima made solid progress on the opening day of free practice for the Australian Grand Prix as he again stood in for the injured Takaaki Nakagami. Tackling Phillip Island for the first time on MotoGP machinery, the LCR Honda IDEMITSU rider made a big stride between se more >>

Cold temperatures, powerful winds and a mixture of sun and rain made it an opening day dominated by rapidly changing and unpredictable weather conditions for Elf Marc VDS Racing Team riders.    more >>


Yamaha Motor Europe is pleased to announce that Jeremy Seewer, Maxime Renaux and Glenn Coldenhoff will remain with the Monster Energy Yamaha Factory MXGP team in 2023, racing the premier class of the FIM Motocross World Championship, with all three riders targeting the MXGP crown aboard the Factory YZ450FM.  more >>


Lowes and Arbolino in positive mood ahead of Phillip Island return


With just three rounds remaining in the 2022 Moto2 World Championship, Sam Lowes and Tony Arbolino return to Australia this weekend to take on the spectacular challenge of the 4.4km Phillip Island track.          more >>


Alex Marquez thrilled to return to the Island for Australian GP


The MotoGP World Championship returns to one of its iconic venues for round 18 of this year’s series, and LCR Honda CASTROL man Álex Márquez is excited about the prospect of tackling Phillip Island more >>


Nagashima back in LCR Honda saddle for Australia


Darryn Binder and Cal Crutchlow can’t wait to ride their Yamaha YZR-M1 machines at the picturesque Phillip Island Grand Prix Circuit this weekend.With 17 rounds down and three to go in 2022, the next stop of the MotoGP World Championshi more >>


The Ducati Lenovo Team has arrived in Australia to contest the third-to-last round of the 2022 MotoGP season, the Australian GP, at the Philip Island Grand Prix Circuit this weekend.


The track, about a two-hour drive from Me more >>


The Yamaha Ténéré World Raid Team of Alessandro Botturi and Pol Tarrés, in partnership with Riders for Health, are ready to make history once again as they take on the gruelling Africa Eco Race that follows the original Paris-Dakar route between the 15th-30th of October.     more >>

Following a serious incident in the FIM Supersport 300 World Championship’s Race 1 during the Pirelli Portuguese Round at the Autodromo Internacional do Algarve, it is with great sadness that we report the passing of rider Victor Steeman (MTM Kawasaki). more >>


Repsol Honda Team ready to rumble Down Under


After a week of rest, the Repsol Honda Team prepare for a return to the legendary Phillip Island Circuit where they will more >>


21 events are foreseen in 2023, including the Monster Energy FIM Motocross of Nations w more >>


Nagashima to replace Nakagami at the Australian Grand Prix


Following doctors’ recommendations, Takaaki Nakagami  will miss the 18th round of the 2022 MotoGP World Championship at Phillip Island in Australia. Tetsuta Nagashima will once again stand in for his compatriot as Taka recovers from the operation he underwent after the Japanese GP. more >>

The 2022 Motocross of European Nations has concluded in Talavera de la Reina as Team France and Team Spain were crowned this year’s champions in the MXoEN and WMXoEN categories!The morning of the race began with an opening ceremo more >>


After Alvaro Diaz won the riders’ title on Saturday, Yamaha was crowned Manufacturers’ Champions in the final FIM Supersport 300 World Championship race of 2022, which saw Italy’s Mirko Gennai lead a Yamaha 1-2-3 at the Algarve International Circuit in Portugal. more >>


Pirelli Portuguese Round WorldSBK 2022   Round 09 The ninth round of the Superbike World Championship draws to a conclusion for the MIE Racing Honda team and brings some positives, despite the riders failing to score points on Portu more >>

The First NASCAR Cup Race in 1949 Wasn’t Pretty, But It Was a Start