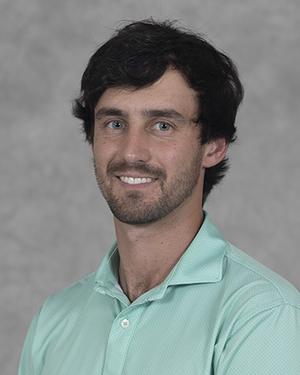 A former Southeastern Lion himself, Lawrence Allan was hired as the new head coach for the SLU Golf program on August 18. Allan replaces former head coach Jake Narro who led Southeastern to a Southland Conference Championship in the spring.

Despite having big shoes to fill, Allan is fully prepared to take on the challenge.

Allan is an Alva, Scotland native who grew up loving golf. One of his earliest childhood memories came when his mom bought him a plastic club and golf balls.

The game of golf has had a ton of iconic athletes to play the sport. For Allan, one of them is Tiger Woods and it’s easy to understand why. Woods has won 82 PGA Golf Tours and twelve international victories, including 15 major tournament championships, putting him in second place all-time behind only Jack Nicklaus.

However, Woods is not Allan’s favorite golf athlete .

“My favorite golfer when I was a kid was probably Sergio Garcia. Mainly because he always dressed cool, and made different colored grips look fun,” Allan said.

Outside of his fashion sense, Garcia has won thirty-six international tournaments, highlighted by a Masters Tournament triumph in 2017. A man with that much success can easily influence young kids like Allan.

Despite these well-established golfers, the most important one in Allan’s life is his dad.

Allan played multiple sports in high school such as football, soccer and rugby. However, what made Allan gravitate to golf so much was his father.

“He was always a really good golfer, and I wanted to follow in his footsteps,” he said.

His love for his dad and his family is something Allan carries with him throughout his entire life. Having this support system is what helped him get through tough times.

After high school, Allan attended Southeastern. During his stay at SLU, he became a three-time All-Southland performer from 2012-2016 and played a significant role on the 2013 Southland Conference championship team.

Allan graduated as a Lion with a degree in sports management. Soon after, he had a professional career in Europe, where he was on the PGA EuroPro Tour, the Challenge Tour and the APT Tour.

Allan’s hard work and dedication stem from his desire to win at the highest level. His passion for the success of other golfers is something that has continued to grow after he was hired to become a coach.

“It’s all about doing the best you possibly can. Golf is a team sport but you still play individually, so if you can do your best it helps out everyone,” Allan said.

What made his collegiate career and professional career so special was the fact that his teammates treated Allan like family. Everyone in Europe was from different backgrounds and cultures, so getting to know one another and creating those special bonds was key to their success.

Allan is trying to take this same approach with his players at Southeastern. “I’m trying to make it similar to what it was for me. Trying to recreate that culture is very key.”

As a head coach, Allan wants to take inspiration from New England Patriots head coach, Bill Belichick. Allan said he admires Belichick for the way his teams are always prepared and well organized.

Ultimately, Allan’s family background shaped him into who he is today. From his dad being his favorite golfer to his teammates treating him like family, he plans to carry on that tradition with his group of Lions.