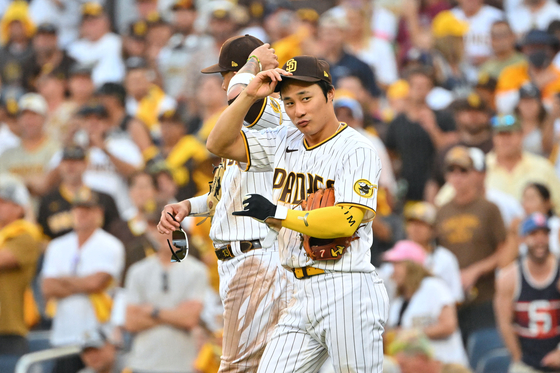 San Diego Padres shortstop Kim Ha-seong takes the field for the ninth inning against the Philadelphia Phillies during game two of the NLCS at Petco Park in San Diego on Wednesday. [USA TODAY/YONHAP]

A Fox Sports commentator appeared to refer to San Diego Padres shortstop Kim Ha-seong, who is Korean, as a player from Japan during a live broadcast of game two of the National League Championship Series on Wednesday.

Fox Sports color commentator John Smoltz referred to Kim’s career “in Japan” while discussing his batting during the fifth inning of the game.

“I know in Japan he was known for a home run hitter,” Smoltz said.

Kim was born and raised in Korea and played his entire career here with the Kiwoom Heroes organization before joining the Padres at the end of 2020. He is a three-time KBO Golden Glove winner and was known in the KBO as a solid batter and exceptional base-runner.

Kim has never played professionally in Japan, with the exception of representing Korea at the 2017 Asia Professional Baseball Championship and the 2019 WBSC Premier12.

Smoltz is a former pitcher who played for the Atlanta Braves, Boston Red Sox and St. Louis Cardinals. He retired in 2009.