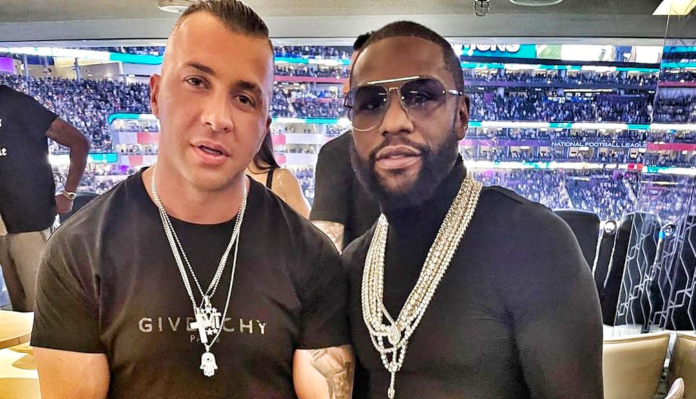 Floyd Mayweather returns to Japan for another exhibition bout under the RIZIN banner on September 25th, and now his bodyguard ‘Jizzy’ will compete alongside him on the undercard.

Ray Sadeghi, known professionally by his questionable nickname ‘Jizzy Mack,’ will compete at Super RIZIN against kickboxer ‘Kouzi,’ aka Koji Tanaka. The bout was recently revealed on RIZIN FF’s official Twitter account, so we assure you this is real. The announcement states the ‘free weight’ fight will be contested under ‘standing bout rules.’

‘Free weight’ is certainly underselling the size differential between Kouzi and Jizzy. Kouzi typically fights at 135 pounds, while Jizzy looks to weigh about a hundred pounds more. At least the smaller man has a whole lot more experience. Kouzi enters this contest with a record of 31-16-2 over his 13 years of professional competition.

Jizzy, on the other hand, has no confirmed pro or amateur fight experience. There is footage of him from 2020 getting quickly knocked down in sparring by a much smaller opponent, though. So let’s hope for his sake he’s worked on his stand-up fundamentals since then.

MMA fans may remember Jizzy from the lead-up to the Conor McGregor vs. Floyd Mayweather boxing superfight in 2017. He was one of Mayweather’s bodyguards, and McGregor spent a small portion of each stop on their worldwide press tour mocking the “juice head turkey.”

Jizzy also made headlines in Japan when he got between Floyd Mayweather and his September 25th Super RIZIN opponent Mikuru Asakura during a staredown, shoving the Japanese fighter. Jizzy would further inflame the pride of Japanese athletes by calling them “weak and disrespectful.” That led to Kouzi stepping up to challenge the unrepentant bodyguard.

Super RIZIN is set to start early in Japan to accommodate North American viewers interested in seeing Floyd Mayweather and Jizzy fighting. The special mini-card kicks off on Sunday at noon in Japan, which is 11pm EST Saturday night in the Western world. Following the shorter Super RIZIN card, there will be a musical interlude featuring pop acts TBA and then RIZIN 38, which is headlined by Kyoji Horiguchi vs. Yuto Hokamura.

Floyd Mayweather doesn’t seem to concerned about taking any damage from his Super RIZIN opponent Asakura. ‘Money’ is already lining up another big-money exhibition bout on November 13th in Dubai against YouTuber Deji, who happens to be KSI’s brother. With opponents like these, ‘Money’ Mayweather doesn’t have too much to worry about in the ring.

His opponents should watch out, though. Mayweather’s first Japanese exhibition fight against Tenshin Nasukawa ended via violent KO in under two minutes.

Let us know what you think of Jizzy’s professional fighting debut at Super RIZIN in the comments!

This article appeared first on BJPENN.COM