Plenty of openings for players to step up for the Minutemen 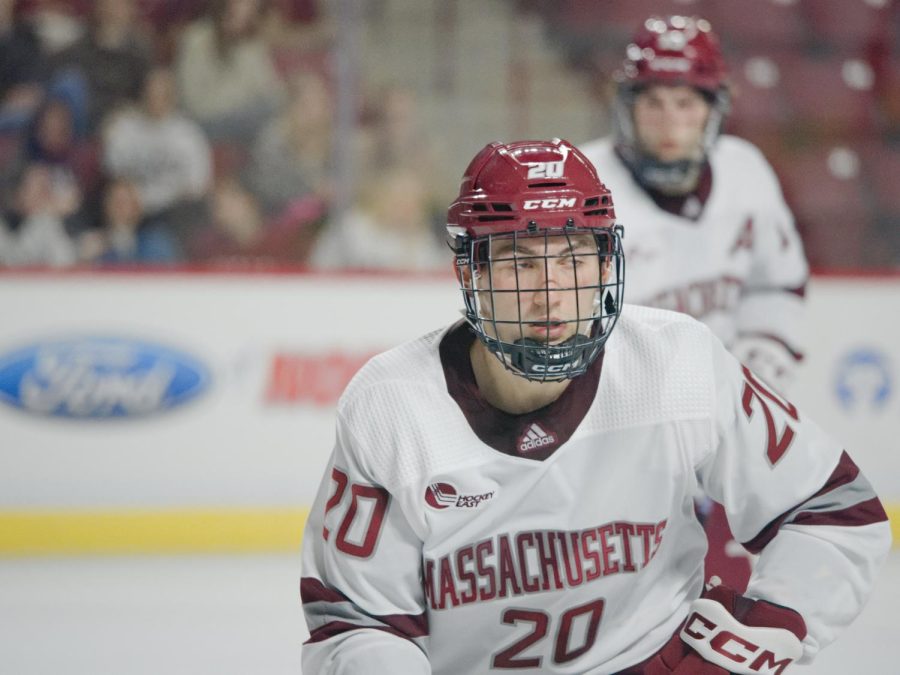 The Massachusetts hockey team is facing more uncertainty ahead of its 2022-23 season than ever before. There isn’t a clear top goal-scorer or a clear starting goaltender, and those questions won’t be answered until partway through the season.

However, with all the uncertainty comes room for stars to emerge. There will be faces in the Minutemen’s lineup that haven’t gotten consistent playing time in the past, and they could shine under the brighter spotlight. I picked out five players that I think could have a breakout season in 2022-23.

Taylor Makar has massive upside potential in UMass’ lineup. He’s a big-body forward that can play center or on the wing, and he isn’t afraid to get physical on the ice. He struggled last year in a number of areas including skating and discipline, but the jump from year one to year two of college hockey is a major time of growth.

Now that Makar had a full off-season to work on the weak parts of his game and build muscle onto his larger frame, he could be a key factor for the Minutemen on both sides of the puck. Makar’s playstyle already fits what head coach Greg Carvel looks for in forwards. He now just needs to showcase his improved skillset on the ice.

Heading into his third season in Amherst, Harding was voted an assistant captain by the Minutemen. They have faith in his leadership abilities and wearing a letter may just give Harding the confidence boost he needs.

Harding is going to be playing more minutes this season than ever before, likely slotting into the second or third line of forwards for UMass. He isn’t known for his offensive production, but if Harding can pick up some slack in that area while remaining a physical presence on the forecheck, he can become a difference maker in the Minutemen’s lineup.

Bohlinger is only a junior, but he is the most experienced defender that UMass has right now based on his time spent in Carvel’s system.

Taking on more of a leadership role in the defense will be new to Bohlinger, but he’s equipped to handle that challenge. He’s in a backend that oozes with talent every year, and this season Bohlinger could come into his own as the two-way defender that he showed glimpses of in his first two seasons.

A key factor for this season is that Bohlinger is coming into the year healthier than he has been in the past. Carvel always cited Bohlinger as a high-impact player that made a real difference when he was on the ice, so if he remains a permanent fixture all season, he can be an anchor in the Minutemen’s backend.

Putting Nodler on here is admittedly a bit of a stretch considering he’s played a lot of meaningful college hockey games already. But in Amherst, he’s still relatively unknown.

In any case, Nodler will likely make a massive impact on the forward group as a graduate transfer from Michigan State. His presence in the face-off circle will give the Minutemen a lift that’s necessary after losing Josh Lopina. He also has 34 career points and can provide some scoring — another area UMass desperately needs help in.

On Saturday night in the Minutemen’s exhibition game, Nodler played on the top line with Cal Kiefiuk and Reed Lebster. Eric Faith wasn’t playing in that game, and I still expect that he’ll be the top line’s center come Oct. 8, but Nodler proved plenty capable of slotting into the top six, whether it be on the first or second line.

I don’t know if there will be a full-time starter in net at the beginning of the season, but I’d imagine by the end of the year UMass will be leaning on Pavicich to carry that load. They brought in Cole Brady from Arizona State to compete for the job, but ultimately, I believe Pavicich has a higher ceiling.

With Matt Murray out of the picture, Pavicich has a much easier path forward to get playing time. The sophomore spent his first year learning from the veteran netminder, and now he can lead the charge forward. If Pavicich wins the starting job and plays well, he can ease some of the burdens that are currently being placed on the offense.

Colin McCarthy can be reached at [email protected] and followed on Twitter @colinmccarth_DC.