Paul defeated UFC legend Anderson Silva via unanimous decision on Saturday in the biggest victory of his young boxing career.

Sulaiman took to Twitter where he congratulated the 25-year-old American for a “sensational” and “entertaining” victory over Silva.

The WBC president dubbed the YouTuber a “legit fighter” and lambasted anyone who doubts his talent.

Sulaiman tweeted: “After last night whoever says @jakepaul is not a legit fighter is simply bitter and a hater.

“Congratulations on a sensational & entertaining win and great show of sportsmanship #fairplay.” 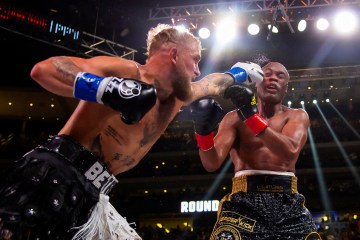 But fans quickly responded by accurately pointing out that Paul has yet to beat an actual boxer.

The Problem Child has won all of his six fights so far against YouTuber AnEsonGib, ex-basketball player Nate Robinson and retired MMA fighters Ben Askren, Silva and Tyron Woodley, whom he beat twice.

One fan tweeted: “Lol. Sulaiman trying to get in on it. Paul has no wins against an actual boxer.”

Another posted: “Can’t say that yet. He fights MMA fighters, not boxers.”

JOIN SUN VEGAS: GET A FREE £10 BONUS WITH 100s OF GAMES TO PLAY AND NO DEPOSIT REQUIRED (Ts&Cs apply)

A third wrote: “Agreed!! He beats Tyson Fury every day of the week.”

This fan commented: “He’s not a boxer because he doesn’t fight boxers it’s simple really.”

The closest Paul has ever come to facing an actual boxer was Tommy Fury.

Their fight was scheduled for December but Fury pulled out after suffering a broken rib and chest infection.