“It’s not hard to live here in the Basque Country because there are so many similarities with where I’m from in Brittany,” says Real Sociedad’s central defender Robin Le Normand, 25. “We’re proud of our land like the Basques. Our territory. Of our food. We’re closed people and when you come somewhere like here, it’s difficult at first, but once the people know you and trust you, then you are accepted.”

And with Le Normand, they came to trust him and depend on him.

“He’s aggressive, correct with the ball, strong in duels and fast,” the Spanish football manager Manolo Marquez tells The Athletic. “I like him, he’s a very important player for La Real.”

Le Normand played in 37 of Real Sociedad’s 38 league games last term, where a sixth-place finish meant more European football in the Europa League. He’s been a near ever-present for three seasons now, three seasons in which the Basque side have played in the Europa League. They played European football only once in the first 13 years of this century, ironically when they met David Moyes’ United in 2013. Thursday will be the fourth time Real Sociedad have played Manchester United since 2021.

United won the first fixture 4-0 behind closed doors in Turin last year, drew the second at Old Trafford and lost the third in M16. A draw will be good enough for the Basques to win the group, with United needing to win by two goals if they’re to take the top spot and avoid February’s two-game knockout against a side who’ve dropped down from the Champions League. In United’s case, that could be Barcelona.

“I played in the first game (the 0-4). Tough,” he says. “Our first time against a giant team in Europe from outside Spain. There were extraordinary factors around that game — it was our ‘home’ game but didn’t feel like one during the pandemic. We learned a lot from that. You have to be smarter.”

They were, with a 0-0 draw and then the victory a few hours after Queen Elizabeth II died.

“I was suspended and injured for both Old Trafford games,” he says. “It was frustrating — it’s one of the great stadiums in world football. But I’m available for the most important game between these two teams on Thursday.

“That win in Manchester gave us a lift. It showed that we can compete with the biggest clubs and even win. We’re not the best team but a good team with good players, humility and determination. If we concentrate, we can beat anyone.”

Le Normand hasn’t been an overnight success. He left Brest aged 19 after one senior game (“Did you know Gonzalo Higuain was born in Brest and Camavinga grew up in Brittany?” he asks) on France’s north west coast and moved to the bottom of the Bay of Biscay. Antoine Griezmann was another young French teenager who left provincial France for San Sebastian and La Real’s youth football factory. He didn’t do badly either.

His younger brother Theo stayed in Brittany and plays for Guingamp. Robin, however, went to Spain.

“I had a lot to learn,” he says of his early years. “But this is the place to learn and I passed my trials to play here. I came with a mentality to work but without the physical side to back it up. Three years of hard work changed that.

“The youth system is excellent. We had the only B team in the second division last season of all La Liga clubs. That’s how good the level of young footballers coming through here is.”

San Sebastian’s Reale Arena is one of many in La Liga that has been redeveloped in the past decade. The capacity was increased from 32,000 during the time of David Moyes to 40,000. More importantly, the stands were brought closer to the pitch. Not quite like their tight, cramped Atotxa home that they left in 1993, but a big improvement. And it will be a rare full house, including 2,000 United fans feasting on pints and pintxos. 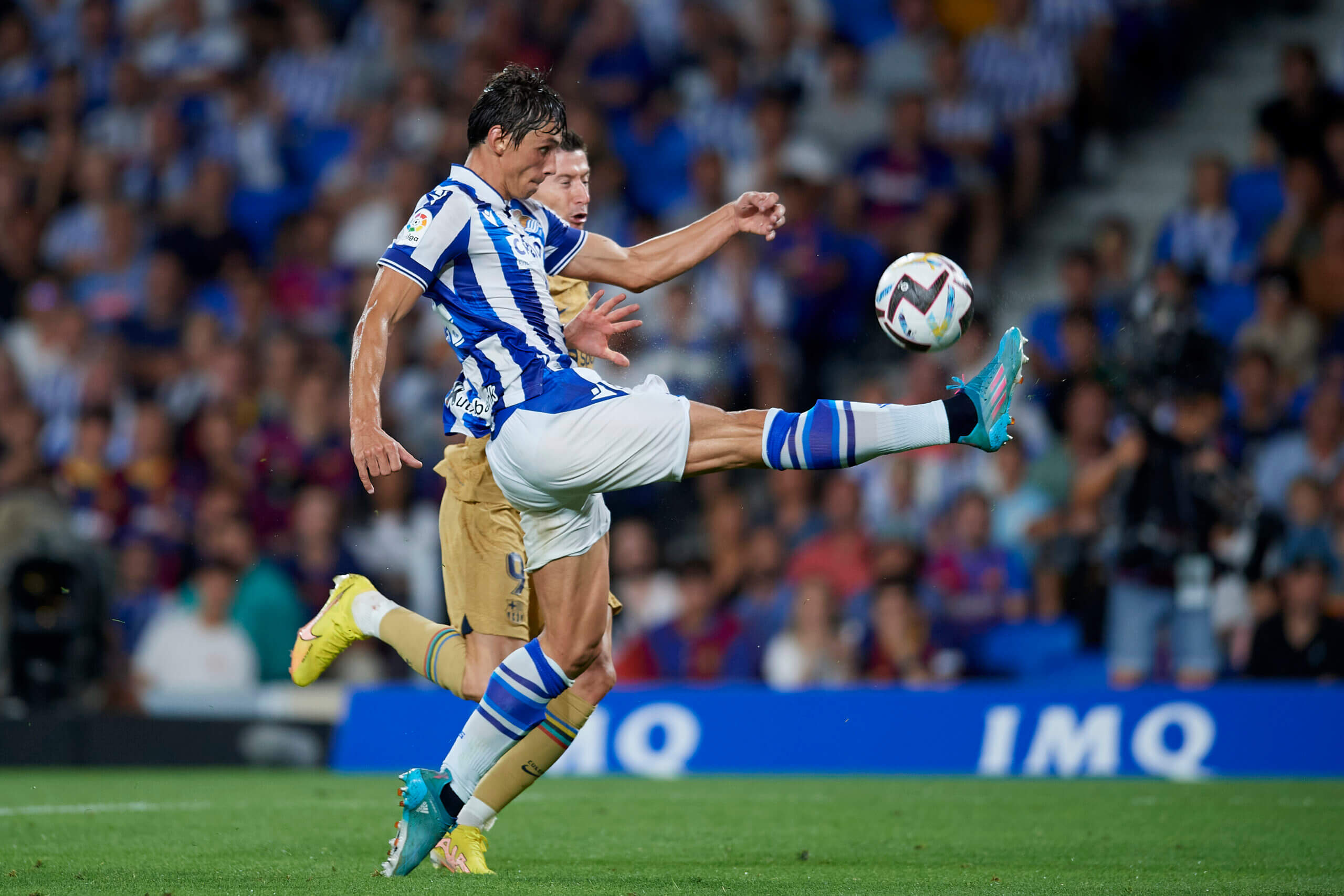 “Look, England is a land of football and you’re used to having the stands close to the pitch, but for many years it wasn’t like that here,” says Le Normand. “The stands are much closer and we feel that as players. The atmosphere really is special.”

United have a French central defender of their own, but he’ll be missing.

“Rafa Varane is an example for me, an inspiration even, someone who went from the French second division to Spain as a young player to win everything with Real Madrid. He’s one of the best in the world. I played against him a few times. He’d speak to me after the games in French. Small chats, he’s a good guy, a real competitor in the game but friendly off it. It shows that if you work and you have the talent, the physique, you can reach the top.”

Le Normand has come up against top players this season, but one has stood out.

“Lewandowski,” he says of the man who scored after a minute in La Real’s first home game of the season and then added a second in a 4-1 win, the only time they’d been beaten at home until Sunday’s reverse against Real Betis.

“It actually gets easy with experience and also technology — you can study players before games and watch videos but when you’re up against the complete footballers in their position, it’s difficult. You can play the perfect game and in one second it’s the imperfect game because they can change. That’s what the best can do. I’ve played against (Lionel) Messi and had the sensation that I’ve played well. And lost.” 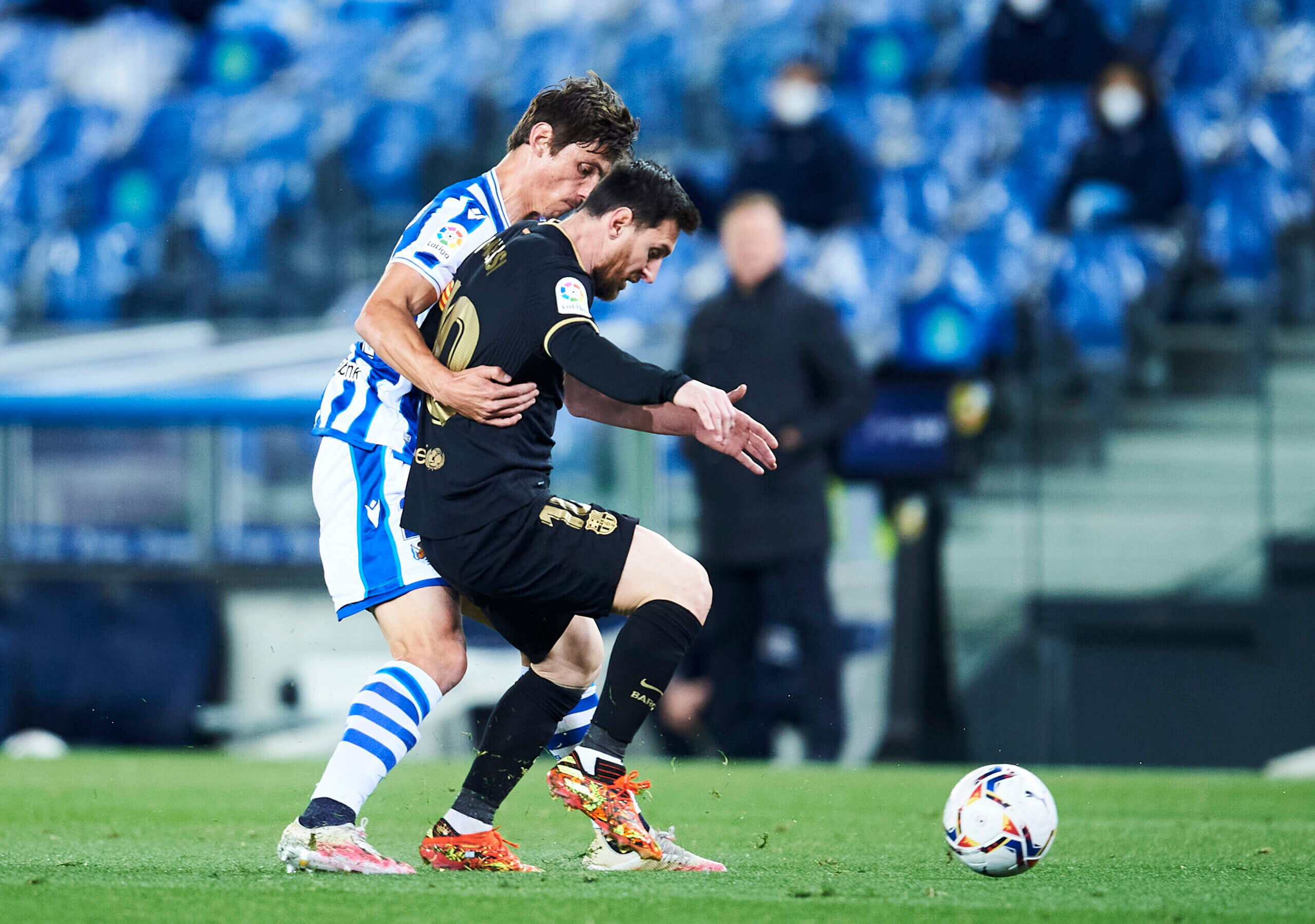 Those losses have become rarer for Sociedad. They’ve won all five of their Europa League games this season, scoring 10 and only conceding one and sit fifth in La Liga, one spot higher than last season. That made it four successive top-10 finishes compared to three in the previous 17 years.

“We’re getting better and we continue to aim to get better. La Liga is very competitive and there’s Barcelona and Real Madrid. It’s very difficult to do what the club did in the 1980s (they won the league twice). The money the biggest clubs have gives them a big advantage, but we want to be playing in Europe every season.

“We won the cup against Athletic Club. The atmosphere in the dressing room is positive, we’re working hard and we need to maintain this dynamic. Tactically, this trainer (Imanol Alguacil) has improved us a lot, there is an excellent youth system here. Many of the players keep coming into the first team and many of them are local — this is important to the people here. If you look at the trainers, too, they know the club well.

“And then there are intelligent signings like David Silva, who every single player here can learn from. We know he’s technically the best player here but we see him, aged 36, one of the best in the league and are amazed. He’s a leader on the pitch, he supports us, advises us, directs play and the rhythm of the game. Very few players can do that. I could talk for 20 minutes about how good David Silva is. In fact, I could speak for two hours about him.” Silva’s thigh injury is a big blow to his side. La Real have lost both league games without him. 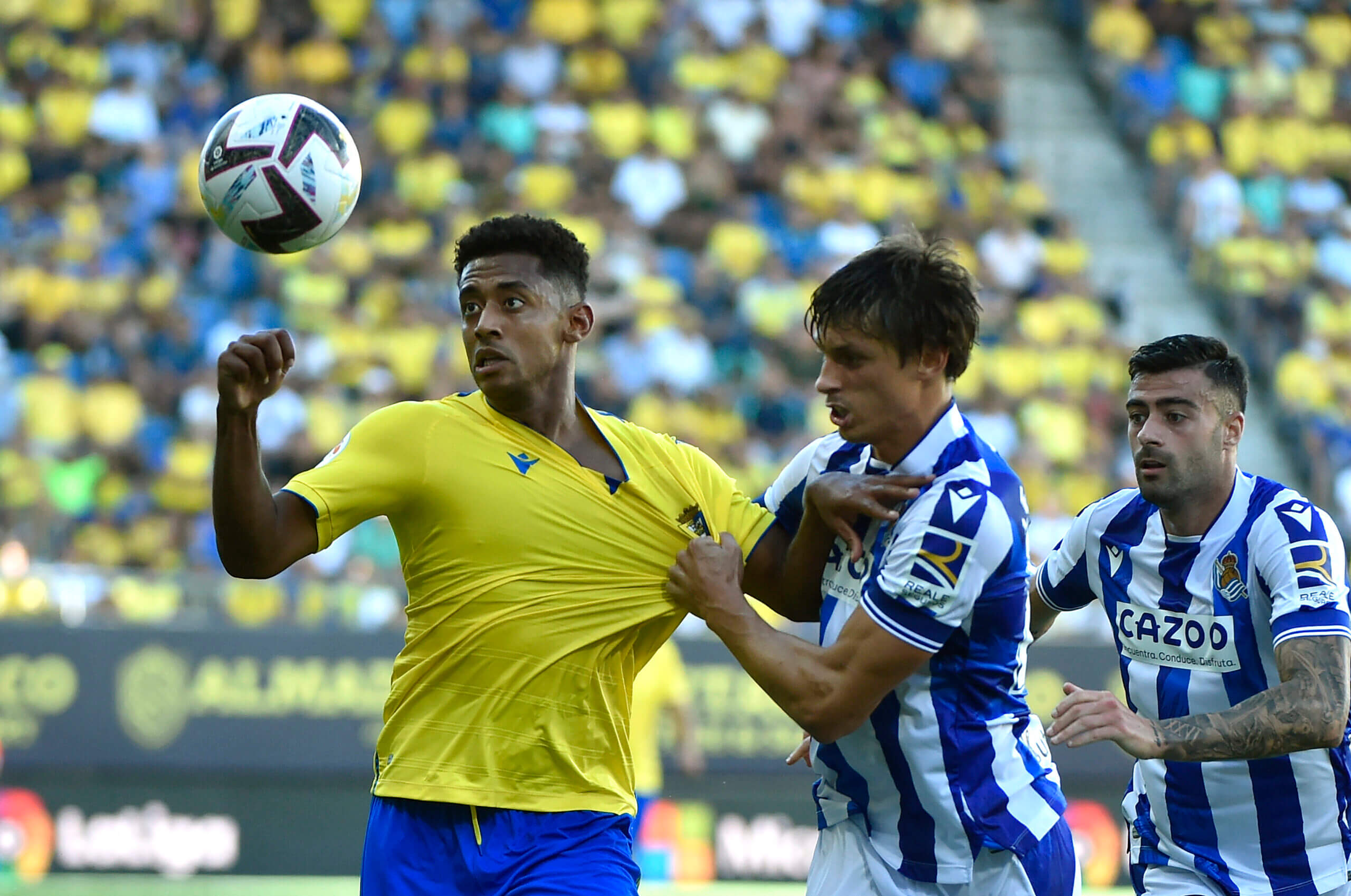 The Europa League is strong this season, with Barcelona, Ajax and Sevilla having dropped down into a competition that the latter have won more than any other. With Real Sociedad and Betis through, that makes it four Spanish sides — but it’s a failure that Barcelona and Atletico (who finished bottom of their group, so didn’t even qualify for the Europa League) didn’t make it out of the Champions League group stage.

“The best teams don’t always win in football,” he says — and doubtless Barcelona’s Xavi Hernandez would agree. “In the Europa League, we beat teams from Moldova and Cyprus but they were hard games, their levels continue to rise. And who would have put Club Bruges qualifying from a group with teams from Spain, Germany and Portugal? But they deserve it.

“The level goes up all the time and it’s about cycles where Spain has done better than any other country in European competition. You’ll see it in the World Cup, too. I don’t expect an African team to win it, but I expect them to be stronger in every World Cup and I’m looking forward to seeing teams like Senegal.”

“My Spanish team-mate (Martin) Zubimendi, if he went, would be a revelation. As would Brais Mendez, too, our top scorer here who only joined this season from Celta Vigo. He scored the goal (a controversially awarded penalty) in Manchester.

“I’m French and our team is already full of stars. People say (Kylian) Mbappe’s levels have dropped but the World Cup is the perfect stage for him to show otherwise. France has the best team, individually and collectively, and we’re world champions and favourites to win again.”

France will have to do it without Paul Pogba.

“An important player as we saw in the last World Cup. I’m not inside the national team so I don’t know exactly how important he is there, but I see a leader in that team. But there are also young French midfielders who play in La Liga with Madrid, Eduardo Camavinga and Aurelien Tchouameni. When you’re playing for Real Madrid aged 19 and 22, you are already demonstrating your level. It’s an incredible level and that’s fantastic for France, but not so much for Real Sociedad when we have to play them.

“My ambition is to play for France and that’s why I work and get better every day. I need to be the best version of myself that I can be so that the trainer of the national team notices.”