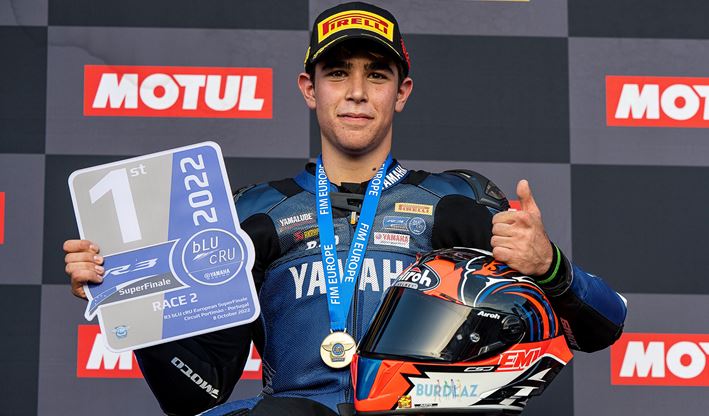 Having scored a podium finish in the opening race this morning, Ercolani edged ahead of France’s Evann Plaindoux in the final standings, with 2021 Yamaha R3 bLU cRU European Cup rider Kayla Yaakov impressing on her return to European racing in third overall. 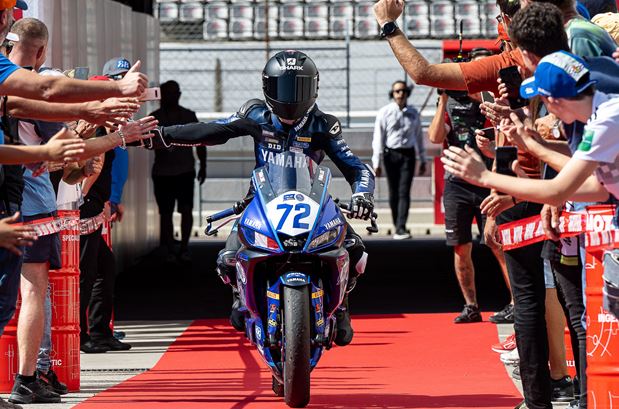 Spain’s Unai Calatayud led the field away from pole position in Race 1, but was quickly demoted behind home hero David Da Costa and Ercolani, who traded positions out front throughout the opening lap.

As the race settled in, 15 riders battled in the front group, with FIM Supersport 300 World Championship Barcelona wildcard Calatuyad regaining the lead on the second lap. Da Costa then hit the front again, and was able to cross the line in first from lap four right until the chequered flag, seeing him become the first Portuguese rider to claim victory inside the FIM Superbike World Championship paddock.

That win didn’t come without a challenge though, with Plaindoux putting in a storming charge from 11th on the grid to narrowly miss out on victory by just 0.081s in second. Ercolani found himself at the back of the lead group in the final few laps, but managed to make his way back into third by the finish, with American young talent Yaakov following him through to take fourth.

Spain’s Javier Corral Arias made it five different nationalities in the top five positions, finishing ahead of pole-sitter Calatayud, who dropped half-a-second behind on the penultimate lap and was unable to recover. Italy’s Emanuele Cazzaniga was seventh and also lost out at the end, after challenging for a top three spot late on. 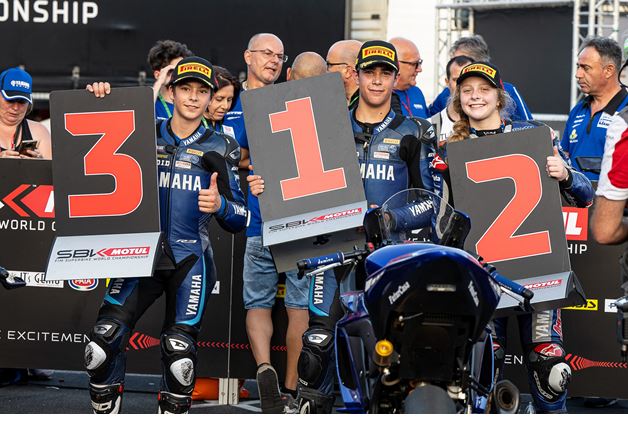 Natalia Rivera Resel came out on top of the second group of riders in eighth, with the Spaniard two seconds clear of Japan’s Teppei Kugawa and Brazil’s Kaywan Alves Freire da Costa.

“It was a very closely contested race, quite tough, especially at the beginning,” Da Costa said. “I tried to widen the gap from the start, but I couldn’t manage to pull away. I could only really hold onto the position in the last few laps. In the end, I won and I am very happy for this.”

The grid was reset for Race 2, which was shortened to eight laps following an incident in the WorldSSP300 race. Da Costa once again fought his way to the front, ahead of Calatayud, with the Race 1 protagonists all back in the hunt throughout the second contest.

The #72 rider looked set to double up in the Algarve, but on the final lap at the final corner – a tricky high-speed downhill right-hander – Da Costa crashed, ending his hopes of winning the first Yamaha R3 SuperFinale. 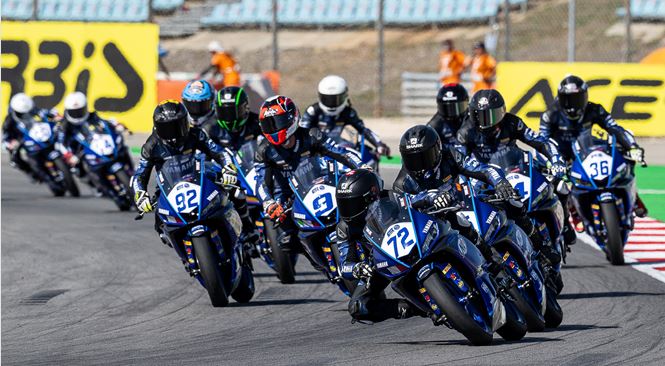 There to capitalise was Ercolani, who jumped ahead of third-place finisher Plaindoux in the final standings to claim the overall victory. Yaakov led at several points throughout the race, crossing the line in second ahead of Freire da Costa.

The Brazilian was penalised a position for track limits on the final lap though, seeing Plaindoux promoted to the podium for the second time this weekend. It was a reverse of Race 1’s results for Spanish duo Calatayud and Corral Arias in fifth and sixth, while France’s Dorian Joulin made impressive gains from 14th on the grid to finish seventh.

Cazzaniga was eighth, ahead of Rivera Resel and Saudi Arabia’s Mohammad Abdalaziz Binladin, both of which were able to run with the lead group in the second race, finishing just over a second from victory.

“I am very happy, I just tried very hard from the start and to finish with the victory is amazing,” Ercolani said. “I will of course be back next year in the Yamaha R3 bLU cRU European Cup, and thanks to Yamaha for offering this event and giving me support for the 2023 season.”


Pirelli Portuguese Round WorldSBK 2022   Round 09 The challenges continue for the MIE Racing Honda team as it competes in the ninth WorldSBK round at the Autódromo Internacional do Algarve in Portugal.In acti more >>


GYTR GRT Yamaha WorldSBK Team’s Garrett Gerloff crossed the line for a 10th-place finish in Race 1 at Autódromo Internacional do Algarve, with Kohta Nozane missing out on points.      The two riders returned to ac more >>


As round nine of the Superbike World Championship continues at the Autódromo Internacional do Algarve, Team HRC riders Xavi Vierge and Iker Lecuona have now completed the first of the more >>

The first day of racing has concluded with the qualifying sessions in Talavera de la Reina, Spain for the 2022 edition of the Motocross of European Nations.The qualifying heats were crucial for the teams aiming to secure the best possible position on the grid for tomo more >>


Pata Yamaha with Brixx WorldSBK’s Toprak Razgatlıoğlu took a dominant win in Race 1 of the ninth round of the 2022 FIM Superbike World Championship at the Algarve International Circuit in Portugal today.     more >>


Work to do for MIE Racing Honda Team at Portimão


Pirelli Portuguese Round WorldSBK 2022   Round 09 The MIE Racing Honda team has been out at the Autódromo Internacional do Algarve in Portugal today, competing in the first free practice sessions of the ninth Superbike World Championship round.In warm and sunny conditions, the squad’s riders Leandro ‘Tati’ M more >>


Race pace the target for Team HRC at Portimão


Pata Yamaha with Brixx WorldSBK rider and defending WorldSBK Champion Toprak Razgatlıoğlu topped Friday’s Free Practice with a commanding lap time of 1’40.720, as the ninth round of the 2022 FIM Superbike World Championship kicked off at the Algarve International Circuit in Portugal today.     more >>


The GYTR GRT Yamaha WorldSBK Team returned to action today at Autodromo Internacional do Algarve in Portugal, with Garrett Gerloff ending the day third fastest on combined times. The Texan’s teammate, Kohta Nozane,endured a difficult day but improved his lap time this afternoon to finish in 22nd position.     more >>


18-year-old Spaniard Unai Calatayud starred on Friday to claim pole position in the first edition of the Yamaha R3 bLU cRU European SuperFinale held at the Autodromo Internacional do Algarve, with the front row separated by just 0.248s. more >>


The BMW Motorrad Motorsport family is mourning the death of Chrissy Rouse (GBR). The 26-year-old Briton passed away on Thursday, succumbing to the serious injuries suffered last weekend in an accident in the British Superbike Championship at Donington Park (GBR). It was with great dismay and sadness that BMW Motorrad Motorsport received the news of Rouse’s death.  more >>


This weekend the FIM Europe Motocross of European Nations returns, with the fastest riders in Europe gathering in Talavera de la Reina, Spain, for one big racing weekend where they will hope to put their nation on the top step of the box!


Rinaldi rockets to WorldSBK FP1 honours at Portimao ahead of Gerloff, Bautista P5 behind rivals


#PRTWorldSBK WorldSBK PortugalPortimao, AlgarveOctober 7th-9th All eyes were on the riders and all ears were glued to what they had to say, with a new kind of silly season starting after recent tests, as well as approaches for t more >>


Syahrin and Mercado reunited for the Portuguese WorldSBK Round


Pirelli Portuguese Round WorldSBK 2022   Round 09 The MIE Racing Honda Team prepares to take on the Autódromo Internacional do Algarve in Portimão, Portugal, the stage for round nine of the 2022 Superbike World Championship. more >>


The Aruba.it Racing -Ducati team is ready at Portimao for the final European round of the 2022 WorldSBK season


World Superbike 2022 R9 Portimao, Portugal7-9 October 2022It is the ninth round of the 2022 WorldSBK season, the last in Europe before overseas trips to Argentina, Indonesia, and Australia.After a fantas more >>


Team HRC ready for last continental round in Portimão


Round nine of the Superbike World Championship sees Team HRC and factory riders Iker Lecuona and Xavi Vierge travel to Portugal, and the Autódromo Internacional do Algar more >>


After a returning to the podium at the Catalan round, the GYTR GRT Yamaha WorldSBK Team is looking forward to the ninth round of the 2022 FIM Superbike World Championship at Autodromo do Algarve, Portugal.     Previously in C more >>


Rider standings ahead of X-Trial Andorra 2022


X-Trial Andorra 2022 X-Trial 2022   Round X-TR5 The Repsol Honda Team duo, Toni Bou and Gabriel Marcelli are set to compete in the final event of the 2022 X-Trial World Championship this Saturday. more >>