Entering the ACC Tournament, what does Syracuse field hockey bring to the table?

To support student journalism and the content you love, become a member of The Daily Orange today.

After No. 12 Syracuse (14-3, 3-2 Atlantic Coast) moved into third place in the Atlantic Coast Conference following last week’s upset win over No. 4 Louisville, its focus shifts to the ACC Tournament. The Orange play their regular-season finale at No. 13 Wake Forest on Oct. 28, and the conference tournament begins on Nov. 1 in Durham, North Carolina.

“(The win) meant so much because we’ve been focusing on bouncing back and resetting after we get scored on,” said graduate forward Quirine Comans.

With a win over the Demon Deacons, the Orange would start the conference tournament as the No. 2 seed for the second straight season. A loss would drop them to fourth. They would be tied with No. 7 Virginia at 3-3, but the Cavaliers hold a tiebreaker over Syracuse by virtue of their 3-0 win over the Orange on Sept. 23.

But before postseason play commences, let’s dive deeper into the key takeaways from the regular season.

Jumping out in front

The Orange have scored first in 12 of their 17 games this season, and in those 12 games, they hold a perfect 12-0 record. This season, games have usually ended in a blowout when Syracuse scores first, with a +47 goal differential in those situations. 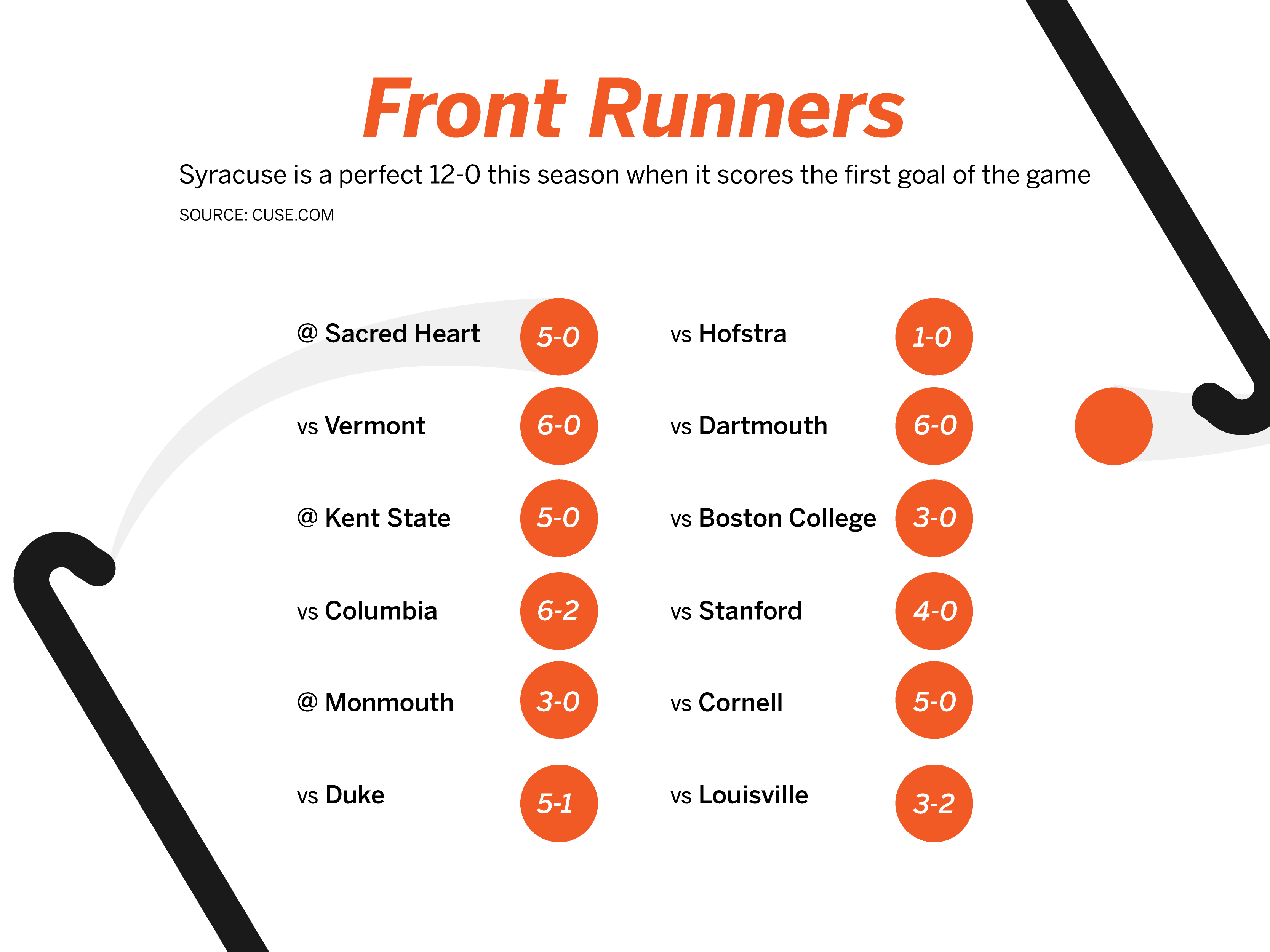 Syracuse scored first in its first four games, dominating its nonconference opponents. The Orange have outscored their opponents by 19 and scored 26 goals through their first six games, the most since the 2016 team that made the quarterfinals of the NCAA Tournament (also with 26). The team finished the regular season with a 10-0 nonconference record and a +39 goal differential.

In conference play, Syracuse scored first in three of five games. In contests where SU got on the scoreboard first, it beat Duke 5-1, Boston College 3-0 and Louisville 3-2.

Seven different players combined to score the opening goal through the 12 games where Syracuse scored first. Charlotte de Vries leads the team with six opening goals, while six other players have one opening goal.

Syracuse is just 2-3 when conceding first. The two come-from-behind victories came against James Madison in overtime and last Friday’s win over Louisville. The Orange allowed the first goal in losses to Princeton, Virginia and North Carolina.

Syracuse’s defense has also had its fair share of dominance.

The Orange have shut out their opponents nine times so far, the most since 2017, with goalkeeper Brooke Borzymowski notching a career-high nine scoreless outings.

“(Brooke) has that quiet confidence in there,” head coach Ange Bradley said after Syracuse’s 3-0 win over Boston College on Sept. 30. “[She’s] doing her role and doing it well. When she’s doing that, she helps everyone else do their job.”

If SU can keep Wake Forest scoreless on Friday, the team will reach double-digit shutouts in the regular season for just the second time this century.

“(Borzymowski) is a brick wall. We all trust her so much. The more experience she gets the better.” de Vries said.

Outside of the goal, defenders Eefke van den Nieuwenhof, Jannemijn Deutman and Sienna Pegram have been solid, working tirelessly to stop opposing offenses and create outlet passes in transition.

“We’re very tough girls on the field and we practice really hard. No matter what happens, we keep going,” van den Nieuwenhof said after SU’s 4-0 win against Stanford on Oct. 5th.

Syracuse has relied on its defensive unit to keep them in games, but will need to translate that to the postseason to make a run in the ACC tournament.

Following Sunday’s win over No. 19 Rutgers, the Orange finished 9-0 in the regular season at home. It was SU’s first undefeated season at J.S. Coyne Stadium since the 2015 national championship team (10-0). 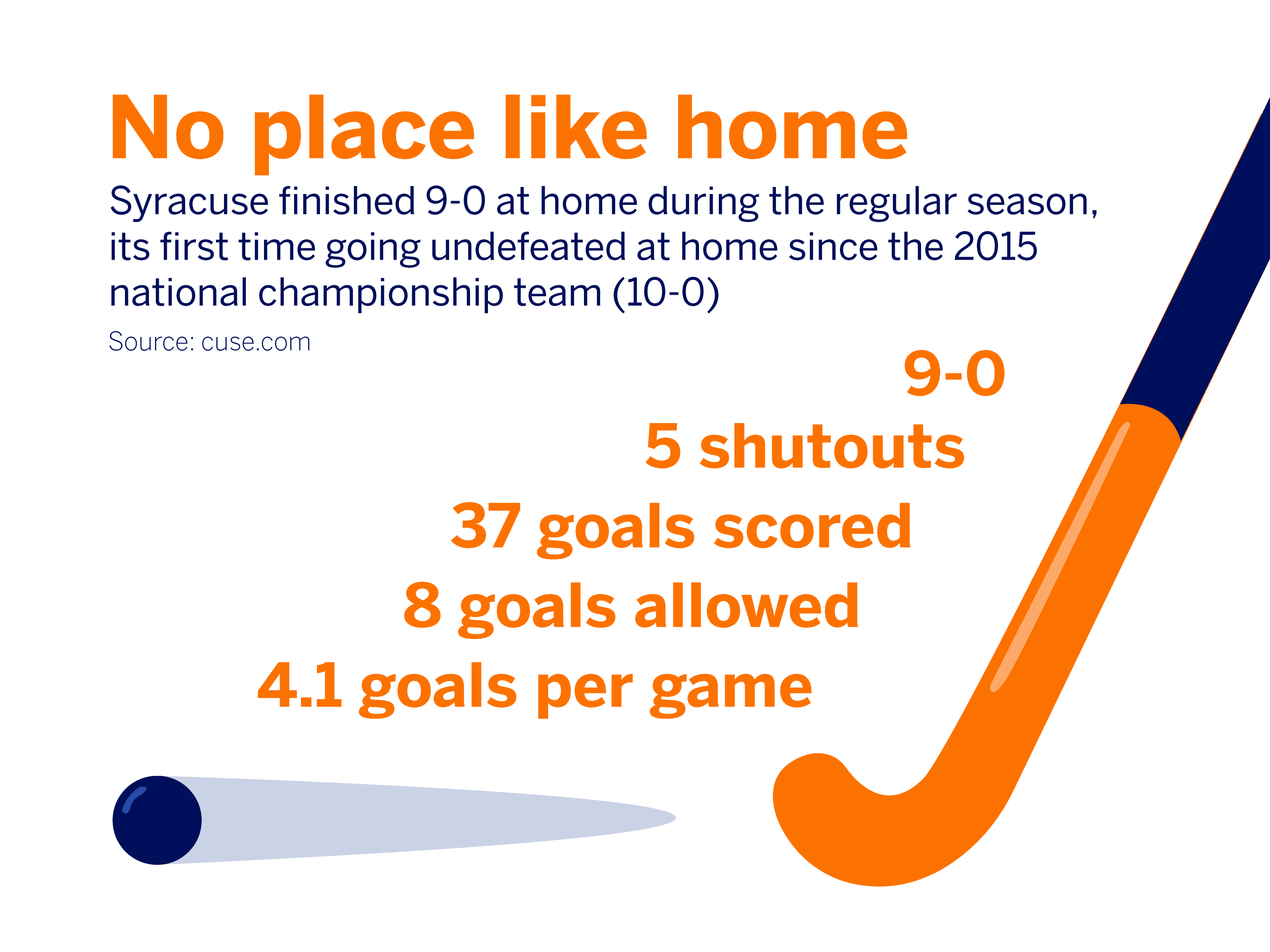 “It’s our house. We train here, we live here, we play here, it’s our playground,” Bradley said  after a win over Louisville last week.

In nine games at J.S. Coyne, SU tallied 37 goals while only allowing eight.

But Syracuse is 3-3 overall and 0-2 in ACC play with just +1 on goal differential on the road. With the conference tournament in Durham, all but one team will be playing on neutral turf, except for Duke, who is 1-4 at home.