Dmitry Bivol To Move Towards Undisputed After Gilberto Ramirez Fight

WBA light heavyweight champion Dmitry Bivol (20-0, 11 KOs) says he will proceed to his next goal of becoming the undisputed 175-lb champion if he successfully defeats challenger Gilberto Ramirez (44-0, 30 KOs) this Saturday, November 5th, in Abu Dhabi.

For Bivol to become undisputed, he’ll need to take on the dangerous knockout artist, IBF, WBC & WBO champion Artur Beterbiev (18-0,18 KOs), a fighter that has been knocking everybody out that he’s faced since turning professional in 2013 after arguably being robbed of a victory over Oleksandr Usyk in the 2012 Olympics.

For the time being, Bivol is concentrating only on the task at hand against the undefeated former WBO super middleweight champion ‘Zurdo’ Ramirez, who is a fighter that looks and fights like a full-fledged cruiserweight.

Ramirez isn’t on the same level as Bivol or Beterbiev, but his huge size for the light heavyweight division gives him an advantage.

Size can make up for what a fighter lacks in terms of power, speed, or boxing ability, and Ramirez is a prime example of that.

The 6’4″ southpaw Zurdo, 31, is a huge guy that gets over on size alone, making him hard to beat for fighters that are giving away a lot of weight like the much smaller Bivol.

Bivol has got to make sure that he doesn’t let Ramirez use his size on him, and the best way to do that is to stay on the move all night.

“I’m looking forward [to the fight]. Of course, I like that people support me,” said Dmitry Bivol to Boxing Social about his fight on Saturday night on November 5th against Gilberto ‘Zurdo’ Ramirez.

“I like the Abu Dhabi government making this event for people, and I see they love sport,” Bivol continued. “It’s great. Of course, I’m glad. I don’t know what he will do, but we should be ready for everything.

“On our training camp, we train for different strategies for this fight. I’m focused only on my fight now. I’m not focused on my goal,” said Bivol when asked if he’s thinking about fighting IBF, WBC & WBO 175-lb champion Artur Beterbiev next.

“Of course, if it happens, I’ll try to do my best, of course. I’ll try to be better,” said Bivol when asked if he believes he’ll do better against Canelo Alvarez in a rematch when or if they fight next May. 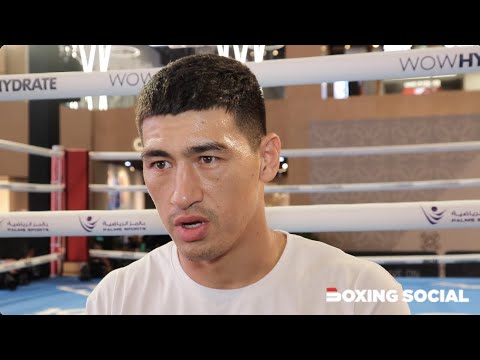