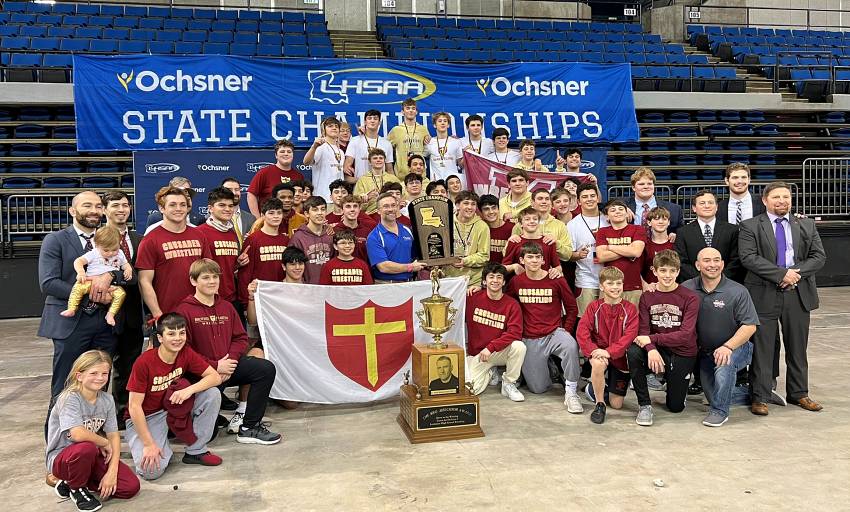 Return of the crusade seems to be a theme fit for one particular wrestling team Louisiana – the Brother Martin Crusaders, to be exact.

The Crusaders have an opportunity to win back-to-back team state titles which would put them on track to streaking in the LHSAA finals like years past.

Andrew Nicola, who is entering is fourth season in charge at Brother Martin, took over the program in 2020 and led them to a state team title in his first year. Nicola led his team to two team titles in three years since being in charge.

Brother Martin will look to climb the mountain again after only graduating six senior starters. The lineup returns a plethora of experienced wrestlers especially underclassmen.

“Accountability and consistency are two big factors in being a championship caliber team year after year,” Nicola said. “Our team is simply grateful for the opportunity to compete and therefore we hold each other accountable and we are consistent with our training on a year-round basis.”

Last year, Richie Clementi made history by becoming the only undefeated freshman to win a state championship in school history. He did not just dominate the state of Louisiana but surrounding states when the team competed out of town. Clementi went perfect by winning 40 matches all season with little trouble. The team will now depend on Clementi to be a leader despite being only a sophomore.

“Clementi was elected by his peers as a class-level team leader,” Nicola said. “Our staff places a lot of responsibility on our peer-elected team leaders and team captains. Clementi is working daily to become a better leader by example in all that he does academically, athletically, and socially.”

With such a brilliant varsity start, Clementi has an opportunity to become one of the most decorated wrestlers in Louisiana prep history.

Two other sophomores returning will be pivotal when the Crusaders takes the mat. Trey Trainor earned a starting spot after winning at an intense dual meet against Holy Cross last year. Rory Horvath is an underclassman who had an overall record of 31-13 and gained a magnitude of experience against credible opponents.

The returning juniors include an outstanding pair in Jacob Elsensohn and Hunter Chabert.

Last year, Elsensohn placed third at state but compiled a record of 50-3. He comes from a wrestling family as Jacob’s brother Mason won the 132 lbs. individual state championship a year ago. Jacob is tough as nails and seems poised for a revenge tour for his junior season.

Chabert had an impressive record of 43-9 last year but could not crack the lineup due to the depth the Crusaders consistently have. However, he has an opportunity this year to put Louisiana on notice for the next two seasons. Chabert also like his peers defeated significant opponents last season to seed him atop last year’s state tournament.

The Brother Martin senior class is loaded with wrestlers who have been in the lineup since their freshman year – Kent Burandt, Ty Duncan, Nick Cusimano, Sam Riles, and Evan Huling.

Burandt has one more shot to win the individual title. He has made the finals every year since his freshman season but earned a runner-up metal each time attempting to win the gold. Burandt had a record of 40-7 last year and lost only three times to Louisiana competition.

“KB has had what it takes the last two years,” Nicola said. “Obviously as a freshman he ran into a buzz saw with one of the Frost twins, but the last two years he came up short against opponents he believed he was better then.

“Burandt had a great summer of training and has been focusing very diligently on giving his best effort every day, amid the distractions of life. If the best version of Kent Burandt shows up in February, then I believe he will cap his career off as a state champion. More importantly, he believes he will cap off his career with a team and individual state championship this season.”

Duncan really surprised in the state last year when he upset a number one seed in the semifinals at the state championships. He did fall short in the finals but had already opened eyes before state at the Louisiana Classic, a tournament essentially like the state tournament but without any division separation.

Glenn Price, a four-time individual state champion from Archbishop Shaw, went toe-to-toe in a match with Duncan then. Price would eventually win the match but Duncan kept Price on his toes. Overall, Duncan went 43-13 while earning the starting spot in the middle of the season so the potential is there for him to have an even stronger run as a senior.

“Duncan’s case is proof in the pudding that you become a product of your environment,” Nicola said. “He is a selfless leader and gives credit where credit is due, which is why if you ask him why he had the level of success that he did last year, he will say it is because of Mason Elsensohn. They were drill partners and Elsensohn held Duncan accountable every day. Ty has been special since day one when he stepped on the mats for the first time ever as a freshman. We were simply waiting on him to believe in himself the same way that we believe in him.”

Cusimano is another dominant wrestler who finished with an overall record of 37-7 last year. The season did not end the way he wanted at state but he is an individual who works extremely hard every offseason.

Riles wrestled at 160 last year and is primed be another key returning piece for the Crusaders. Tall and lengthy, he uses his dimensions to his advantage. Last year, Riles finished with an overall record of 36-20 and placed sixth at the state tournament.

Huling will also be a valuable upper-weight returner after he gained valuable experience when wrestling heavyweight for the Crusaders last year.

“This is a tough sport and not everyone can handle the physical and mental demands,” Nicola said. “We have a lot of young guys that committed their summers to improving in these area. I’d venture to say we will see some solid varsity time on the mats for freshmen Josh Lara, Mark Graffagnini, and Quinn McDermott.”

With their impressive depth and overall experience, Brother Martin looks poised to win Division I again. Nicola will have the Crusaders travel outside the state lines to find competition that will sharpen the skill of the team for the state championship push.

“The only expectation I have from this team is to be grateful for the opportunity we have to do what we love to do,” Nicola said. “That is our goal…to have an attitude of gratitude. Hopefully we get our hands raised a lot in the process.”

The title is never a lock, and programs at Holy Cross, Jesuit, and Catholic (BR) will be among the top Division 1 competitors. The Crusaders start the season November 11 in Texas at the Katy Duals.