Canelo Alvarez: “I’m The Best Fighter In The World”

Canelo Alvarez says he still views himself as the best fighter in boxing despite his recent loss to Dmitry Bivol. Canelo (57-2-2, 39 KOs) states that no one is doing the things that he’s doing, fighting the best.

The Mexican star Canelo will get a chance to prove that he’s still the best fighter in the sport this Saturday night in his trilogy fight with Gennadiy Golovkin.

In Canelo’s loss to WBA light heavyweight champion Bivol, he received a free pass from some boxing fans because he moved up to 175 to challenge the unbeaten champ.

Canelo won’t get that same free pass should he get beaten by the 40-year-old Golovkin because of his age and the belief that he’s not the same fighter that he once was.

For Canelo to be seen by the boxing world as the best fighter in the sport, he’s going to need to defeat Golovkin (42-1-1, 37 KOs) without controversy and avenge his loss to Bivol.

“I feel great. These dates are really important for Mexico, and I’m really proud to represent Mexico for such an important fight,” said Canelo Alvarez to the media on Wednesday.

“Out of our rivalry, this one will be the most important, and also the fact that he’s going into this fight thinking it’s going to be his last makes him more dangerous,” said Canelo about Golovkin.

“As for myself, I’m going to leave everything in the ring for this fight. Obviously, I go into every fight with that objective, and this is no exception,” said Canelo when asked if he’s going to be looking to knock out Golovkin.

“This is personal so I might give a little extra, but I’m 100% ready for this fight. I’m prepared that way. From the first round, I’ll be looking to go in and get a stoppage.

“Now, I think, we make this deal with DAZN and Eddie Hearn, and that’s why. I’m happy. After the second fight, I thought it was over [with Golovkin]. DAZN wanted this fight. We actually made the fight for 2018, but Covid came, and everything was canceled.

“I’m happy to be involved in this fight because everybody wants to see this fight. I think I’m the best fighter in the world because nobody does what I do in boxing. Nobody takes the risks like me, and I don’t need to take risks.

“I love challenges, and I feel I’m still the best. I wanted to punish him [Golovkin] really hard, and that’s the only thing that happens in my mind,” said Canelo when asked what he thinks when he hears Golovkin saying negative stuff about him.

“I’m very close to doing it. He pretends to be a nice person, but he’s not, and he talks a lot of s*** about me. That’s why I don’t like him. He’s a good fighter. He’s a great fighter, that’s for sure,” said Canelo. 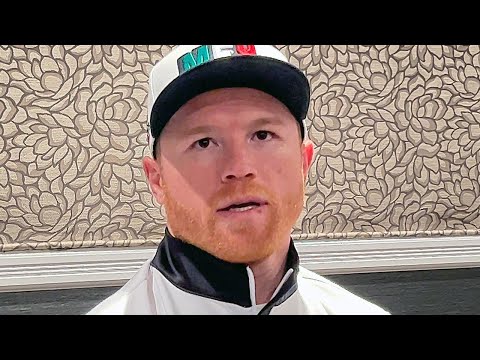